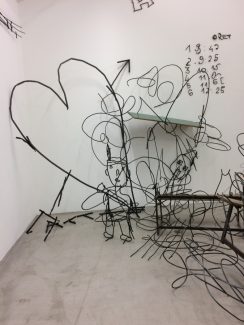 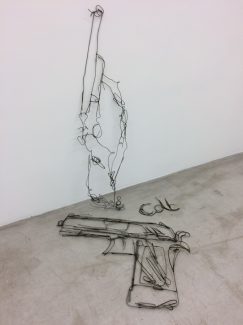 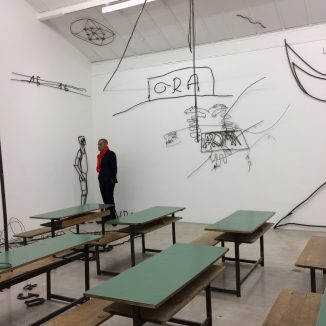 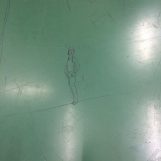 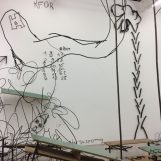 The artist Petrit Halilaj is having his second solo exhibition at the Kamel Mennour Galerie in Paris but he has quite a track record behind him. He was born in Kosovo in 1986, lives and works between Germany, Kosovo and Italy. His work has already been shown in personal exhibitions at the New Museum in NYC, Hangar Biccoca in Milan, Kolnischer  Kunstverein in Cologne, Bundeskunsthalle in Bonn, the National Gallery of Lafayette, in Paris at WIELS Contemporary Art Center, in Brussels and in a collective exhibition at the 57 th Biennale in Venice, at the Galleria d’Arte Moderna in Milan and MAK Center for Art and Architecture in Los Angeles and Palazzo Grassi in Venice and the Westfalischer Kunstverein at Munster. He represented Kosovo for their first presence at the 55th Biennale of Venice in 2013 and received the prize Mario Merz and a special jury prize at the 57 th Biennale of Venice in 2017. So his work might have been new to me but certainly he is very well established in the art world.

This collection is called ABETARE (FLUTURAT) basically that refers to the way that one is taught the ABC’s of a language. The desks in the exhibition represent 30 years of layers of drawings. Imagine students  in a classroom taking moments of freedom being distracted from the lessons and in their dreams drawing different things like  hearts, guns, a penis or I Love You. Of course it is forbidden to scratch images on the desktops but they were feeling totally free to express themselves. Halilaj took these drawings as echos to inhabit the space and enlarged them and made them into 3-D sculptures. What you find are expressions of local history from 80’s to after the war mixed with things we all know from our global history.  Things like  the army next to Eminem. You can see how the kids were totally influenced by the war that they lived through but at the same time the internet arrived and they discovered things like who Ronaldo is and dreams of palm trees which of course don’t grow in Kosovo. The drawings represent their hard history but also an openness to the rest of the world.  When I asked Halilaj where he was living he said no where he is travelling with his work so he has spent the last few weeks in Paris,  and he spends time in Kosovo, Germany and Italy and basically where ever the work takes him.

I suggest when you visit the gallery it makes more sense to start downstairs so you understand the wallpaper like illustrations covering the walls upstairs because they represent the books you use to learn a language..the ABC’S and downstairs represents the actual situation with desks with traces of memories scratched into them so between the two levels you see the relationship between drawing and language and of course Halilaj’s blown up 3-D sculptures of the drawings from the desktops that now inhabit the space.

As for what it is like to live in Kosovo now…Halilaj says GREAT everything is to be invented and built and 70% of the  population is under 30. Seems like a good time to discover Kosovo…

The exhibition is at Kamel Mennour Galerie until January 27th