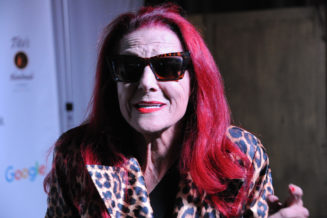 We recently spotted Patricia Field, the Emmy Award-winning costume designer who saw her rise during the Sex and the City era, at the Lower Eastside Girl’s Club Spring Fling in New York. It’s an inspirational place we wish we all had growing up as girls. It isn’t everywhere that girls get center stage to pursue their passions, but its a bit of a community center for girl power – as the go-to place for young girls with dreams; there’s a sewing and design studio, an art school, a digital and audio arts program, as well as mentorship programs with professionals in the field (Natasha Lyonne and Karlie Kloss were also in attendance to show their support).

Field showed up with her trademark fire engine red hair and impeccable style. Nowadays, she runs her own line called ARTFASHION downtown. She makes snapbacks dripping with glitter and she opened her East Village boutique in the mid 1960s, but didn’t get into TV costume design until the 1980s. “Romantic comedies were picking up steam in the movie industry and there was a big need for aspirational, positive styling, which has always been my specialty,” she told Manrepeller. “To be honest, I feel like I’m waiting for a new dawn of imagination to happen in fashion. It’s going in all kinds of directions right now and there isn’t really a philosophy behind it. There isn’t a culture.”