You can count on Lidiya Kolovrat to deliver substantial and poetic clothes for everyday wear, combining exclusive prints and textures with reassuringly urban shapes. With its loose volumes and uncomplicated feel, her seasonal silhouette hinted at exotic locations, without referencing them directly. Her prints may have evoked Indonesian traditions -including batik- but she made them anonymous by reworking city staples to striking effect, such as trench coats, shirt dresses, military parkas or oversize coats. Clashing prints and textures also gave an unusual richness to her pieces, which felt joyful and celebratory. It was interesting to see her grow and evolve a genderless take on clothing, with several garments working on male and female bodies alike. 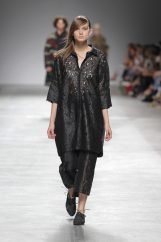 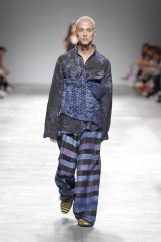 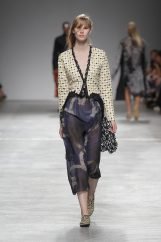