Escapism is certainly something Dries Van Noten understands. His last collection shown in Paris was an ode to optimism, decoration and frivolity, underlining artifice and style. The Belgian designer played with scarves in an interesting way this season, draping them on garments to give them a life of their own, as well as clashing prints and surrealist motifs, crafting clothes that seemed timeless and referenced at once. The great thing with Van Noten’s approach is that it looks familiar, but the mix is always current. Rich jacquard textures evoked the psychedelic 1960s, while several prints were inspired by 1920s Deco. The collection relied on strong contrasts and collage as a creative process, hovering between matte and metallic, opulent and humble, geometric and floral. The color palette was joyful and festive, from canary yellow and fuchsia pink to softer skin tones, such as blush, rose and nude. Embroidered multicolored sequins -a big trend in Paris- appeared on tops, dresses and pants, giving a rather dressy allure to some of the collection’s key looks. It was a lavish, bold and spontaneous show, which celebrated the joys of dressing with great panache. 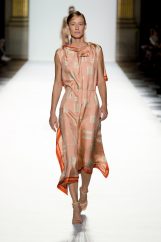 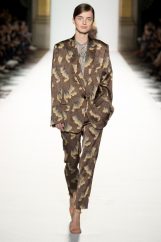