Knowing that Portuguese menswear designer Nuno Gama was celebrating 25 years in the business, you’d naturally expect a happening instead of a standard runway show. Turns out Gama was indeed in a celebratory mood, sending out dancers and actors before actual models, underlining his passion for the performing arts. Gama is famous in Portugal for sticking to his guns and his love of archetypal forms of masculinity, away from fashion’s current fixation with genderless clothes. If the Portuguese designer understands the appeal of austere drama -as seen in a striking feathered black suit and matching bomber worn with simple pants- his approach was younger and more relaxed this time, using playful stripes and contrasting appliqué details to update his signature jackets. Gama loves tight-fitting garments and you will have to stay away from plates of pasteis de nata if you want to feel trim in his printed leggings or shrunken blazers. Leave it to the Lisbon-based designer to deliver an upbeat and optimistic message within troubled times: Gama has been embracing difference, tolerance and understanding since the start of his career, making him a beloved figure in the local fashion scene. 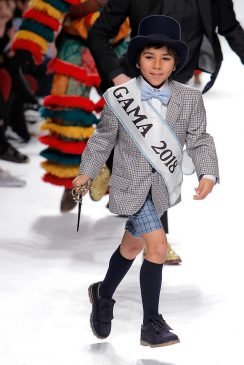 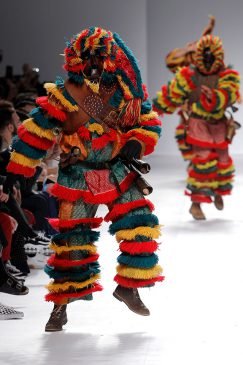