A new wave of Swiss talent is currently growing in Zurich, especially within womenswear where exciting names are coming to the fore. Thanks to the creative platform offered by Mode Suisse, the fashion show event art directed and powered by Yannick Aellen and his team, one can get a glimpse into what influences Swiss designers at the moment. If defining Swiss fashion is still not an easy task, craftsmanship coupled with functionality played an important part during this 12th edition of Mode Suisse, along with a desire for fuss-free clothing and stark minimalism.

Adrian Reber presented a playful and relaxed menswear collection, based around multicolored crochet and easy summer shapes. If the technique had a nostalgic feel -reminding us of the kitschy 1970s- he nevertheless managed to make it stylish and cool, pairing intricate tops, pants and overalls with sportswear-inspired garments. The overall effect was sexy and engaging, reflected in his use of a diverse casting.

A newcomer on the Mode Suisse calendar, Karin Lorez and her label WEER seduced the audience with an energetic lineup, focusing on freshly revamped workwear shapes made in unusual fabrics. WEER’s clothes are pretty much genderless, working on male and female bodies alike, expressing a longing for quality and neutrality. Her use of reflective fibers and draped PVC was also interesting, echoing Helmut Lang’s aesthetics and the acid punk culture of the 1990s.

Working in collaboration with iconic Zurich company EnSoie, whose store is conveniently located in the old center of town, Julian Zigerli had couples in mind this season, putting them in colored cotton trench coats that were both classical and chic, paired with patched denim jeans and cute accessories. The message was positive, emphasizing union, love and tolerance within uncertain times.

Pursuing her research around leather and sensual accessories, Yvonne Reichmuth’s YVY has already gained a cult following among American celebrities and a faithful local clientele, who keeps coming back for more of her lightweight and erotic accessories -such as chokers, belts or harnesses- which Reichmuth paired with new dresses she designed. The YVY woman is self-assured and in control, something unusual coming from Swiss designers who tend to be more on the subtle side. Sexy extravaganza was a buzzword within Kévin Germanier’s incredible graduate collection, which conjured up images of Berlin cabarets and Thierry Mugler glamazons. His showgirls put a big smile on the audience’s faces, which proved us once again that despite their rational outlook, the Swiss might not be that insensitive towards eccentric clothes. 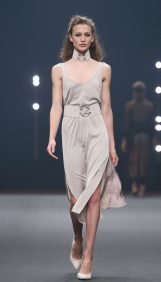 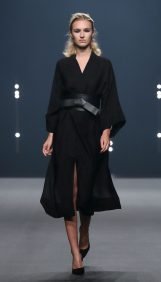 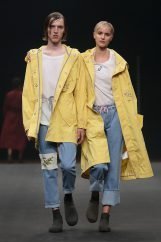 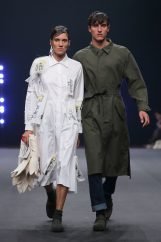 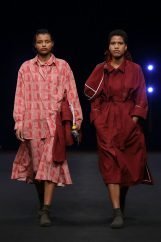 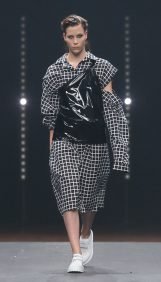 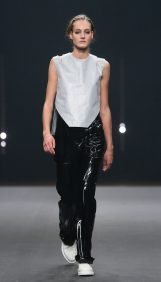 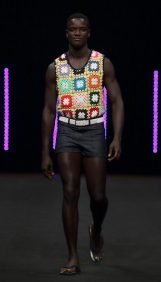