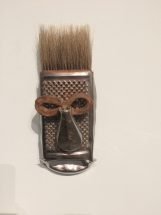 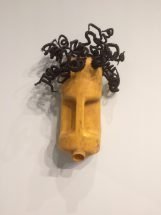 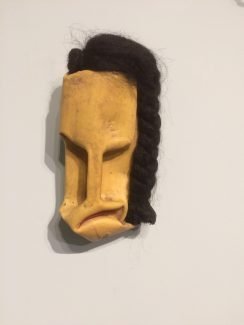 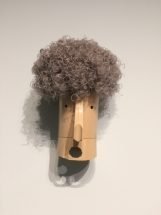 Recuperation and a wild imagination is what the art of Romuald Hazoume is about. I was fascinated and very entertained by  Hazoume who hails from the Republic of Benin and is best known for his work La Bouche du Roi, a reworking of the 1789 image of the slave ship Brookes. The extensive  Pigozzi collection is currently at the Fondation Louis Vuitton until September 4th. I highly suggest you make the effort to get there before it disappears. You will spend a minimum of a few hours and even though Marco de Rivera and I were waiting in the rain in the cold last night, it was well worth it. You need reservations and the Fondation has made it pretty easy, for an additional 2 euros plus your 10 euro ticket for entry,  you can get the electric shuttle from place Charles de Gaulle-Etoile  directly to the Fondation Louis Vuitton, which is great if you are not into hiring Chauffeur Prive. https://billetterie.fondationlouisvuitton.fr/ext/billetterie5/index.php?site=fondationlouisvuitton&p=201

A little note about the private collection of Jean Pigozzi: he is an Italian Harvard-educated venture capitalist and Andre Magnin, a French independant curator specialized in art from non-Western cultures and especially sub-Saharan art. The Jean Pigozzi collection has made a substantial contribution to the international recognition of artists like Seydou Keita, Frederic Bruly Bouabre, George Lilanga, Malick Sidibe, Moke, Cheri Samba, Romauld Hazoume or Bodys Isek Kingelez and has often enriched the permanent collections of African museums by donating works. Romauld Hazoume is present in the Porto-Novo Museum thanks to C.A.A.C and thanks to Pigozzi I discovered this enchanting artist.