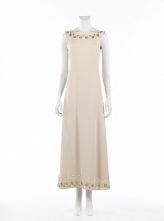 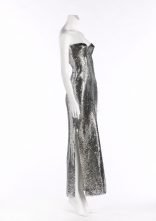 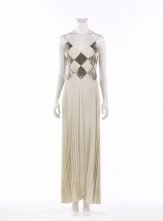 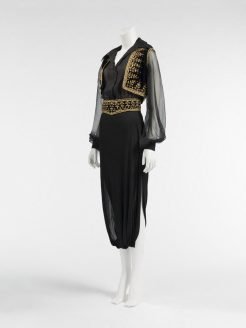 Mine Barral Vergez ensemble noir or 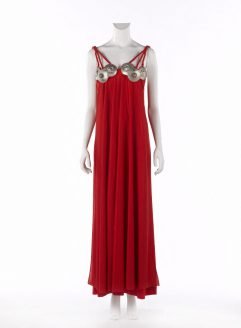 Dalida is an icon in France but there is a chance you are not familiar with her if you are outside of the country so let me tell you something about her.She began her rise to fame when she was crowned Miss Egypt.The Egyptian-born Italian singer and actress  performed and recorded in more than ten languages, including Arabic, Italian, Greek, German, French, English, Japanese, Hebrew, Dutch and Spanish. In 1961, she acquired French citizenship upon marriage, while maintaining her original Italian one. Her 30-year career began in 1956 and ended with her last album in 1986, less than a year before her death. Her suicide led to an iconic image as a tragic diva and renowned singer. Dalida ranks among 7 most popular singers of all time.With the release of  Bambino, a hit at Bobino, her Hollywood style red bustier dress designed by Jean Desses caused a sensation. That dress will welcome the visitors at Palais Galliera, the fashion museum of Paris. It is in the room of honor and sets the scene for the youthful years of Dalida and her ascension to great success. You will discover her garments, her photographs, record covers, different looks from ethnic to hippy, Dalida  embodies the Mediterranean spirit both in its sensual sunny atmosphere as well as its tragic one. Some of Dalida’s looks were from the New-Look in the 50’s by Jacques Esterel, Balmain and Loris Azarro in the seventies, flamboyant sequin costumes by Michel Fresnay in the 80’s, classic Yves Saint Laurent rive gauche and of course our beloved Jean-Claude Jitrois. When asked about dressing Dalida, Jitrois said  “it was like dressing a star for le Festival de Cannes”.

The exhibition is broken down by her silhouette starting  from 1956-1965, with a focus on the famous red bustier dress, then we pass on to her 1966-1978 silhouette of a star, focus on Pierre Balmain, 1978 – 1987 as a show girl focus on looks designed by Michel Fresnay and made by Mine Barral Vergez for her interpretation of the song  Comme le di-sait Mistinguett at Palais des Sports in 1980, her music hall looks.

You will also find her film costumes for Parlez-moi d’amour (1961) by Giorgio Simonelli and L’Inconnue de Hong Kong in 1963. The exhibition is made possible by the donation of her costumes by her brother, Bruno Gigliotti.