Haider Ackermann seemed in a restrained and somewhat darker mood with his collection yesterday, focusing on severely tailored shapes and contrasting textures. Alek Wek opened the show wearing a fitted masculine coat and matching pants, while black dominated the lineup. Jackets often had pronounced shoulders, but they were nipped at the waist to convey sensuality. Ackermann reinterpreted a few menswear staples, such as the classic peacoat or military inspired styles. Strict lines were softened by the recurring use of mongolian lamb, adding a touch of fluffiness and drama to several looks. A black and white blouse was ingenuously draped at the front to reveal skin, while long leather gloves had a vampish feel. When a white mongolian lamb blouson appeared on the runway -worn with a simple pair of black pants- one immediately thought of Claude Montana’s years at Lanvin, which expressed an ongoing tension between sharpness and opulence. 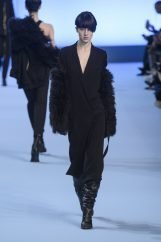 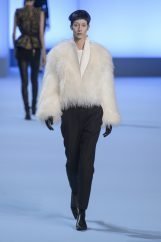 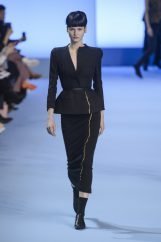