Despite the unwelcome rain taking over Paris this afternoon, guests rushed to Dries Van Noten’s location not knowing what to expect. The Belgian designer was, in fact, celebrating his 100th show today and, as people gathered at Palais Omnisports de Paris Bercy, one was expecting some kind of live act or major performance that would blow the audience away. Turns out we were in for a treat: Van Noten decided to cast his favorite model muses from the 1990s, putting them in some of his beloved archive prints and timeless garments. To say that the casting was incredible would be an understatement, including the likes of Nadja Auermann, Emma Balfour, Carolyn Murphy, Guinevere Van Seenus, Kirsten Owen and many others who walked Van Noten’s shows before. But the beauty of the collection relied on its simplicity and elegant strength, delivering a message that was deeply empowering for the wearer. Focusing on menswear inspired pieces, such as oversize blazers, double-breasted coats, simple shirts and loose pants, Van Noten was reworking a wardrobe of genuine and honest clothes, garments we are all familiar with and have owned at least once in our life. Of course, his striking color palette and unique prints were also present, evoking a special blend of exoticism that was hard to pin down. As the models walked down the runway -many of them smiling and looking cheerful- it was overwhelming to see how graceful and peaceful they were. In many ways, such familiar faces were a powerful reminder that fashion does not always discard the old and that experience can be just as appealing as innocence. Like Van Noten’s clothes, these women should be loved, and truly cherished, for many years to come. 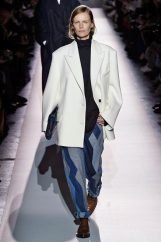 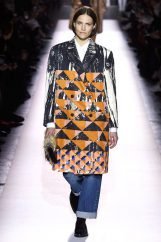 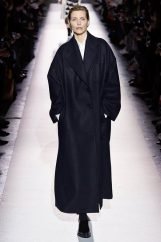