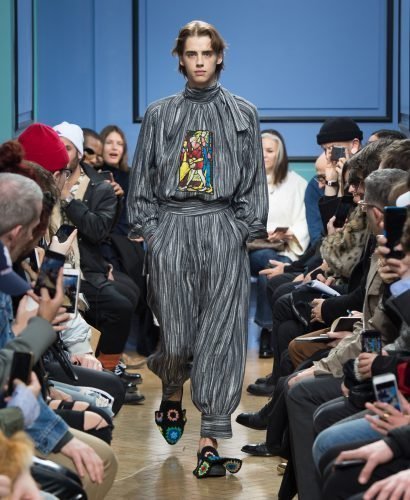 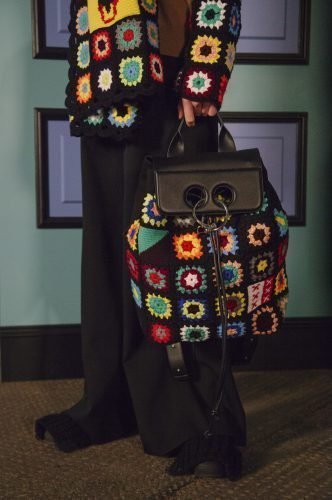 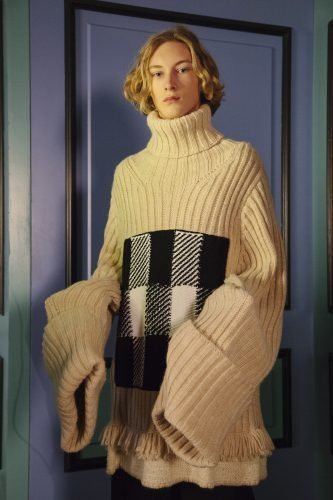 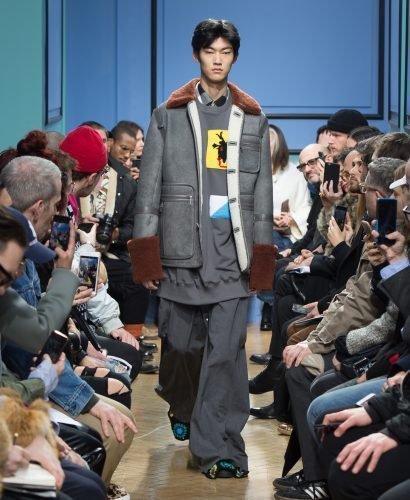 His customary venue of Yeomanry House, out of the way enough to stand out on our schedule, but not quite so much as to be inconvenient, had been arranged into a lilac maze for J.W.Anderson’s show yesterday morning – the day’s first, and yet not quite so early as to dissuade anyone from showing up. We were all sitting in close quarters against the tall mauve walls, the runaway not half a step wide. Cosiness, indeed, was the brand’s seasonal byword, albeit in that slightly twisted way, slightly confining, which has come to define Anderson’s creative process. The show notes, as per usual, don’t reveal much about his themes – they’re just a list of the songs that make up the soundtrack, and yet to read them out in sequence they sound like a poem, a clue: Moon Theme, Manipulated Living, Rivers, Mon Vieil Amour, Don’t Go. But perhaps that’s projecting too much. What we know for sure, what’s palpable, it’s a homespun quality. An old-school flowery crochet that comes as scarves, as pockets, as backpacks or slippers’ tongues. Fringed knits as heavy as carpets, long enough to make do as dresses, with sleeves pouring over the wrist, and well past the hand too. The silhouette, flowers aside, strides with a fluid 1970s flare – elongated and slouchy, high and tight above and roomy below, occasionally sparkly, with pleated neckerchiefs on top. But the cosiness also takes an historical turn towards protection, the holy kind, with oversize fringed capes and stained glass prints that could have been lifted from the windows of a medieval church. A side note on that: Dark Ages nods have been a minor trend of London Fashion Week Men’s over the past few days, and that’s perhaps saying something about what we’ve come to expect from the future. Not in J.W.’s case, though. In his case it’s never about the world at large. Rather, it’s a peek into a thought, hallucination or mirage, and free association. What of those Crayola pastoral landscapes, the Rorschach square appliqué – or is that Donnie Darko, whose OST of course featured Manipulated Living? We all wonder. But understanding is not a prerogative of appreciation, and there was a lot to appreciate here, wearability amid the showpieces. Let us speculate and place our bets. Meanwhile, the collection will fly off the virtual shelves. 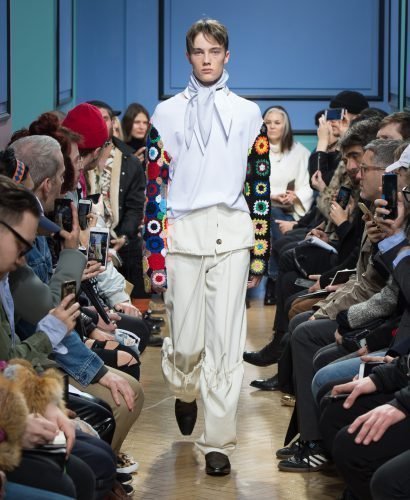 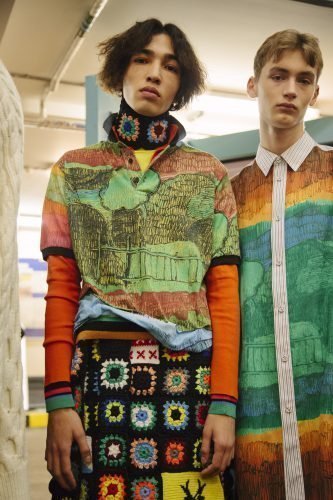 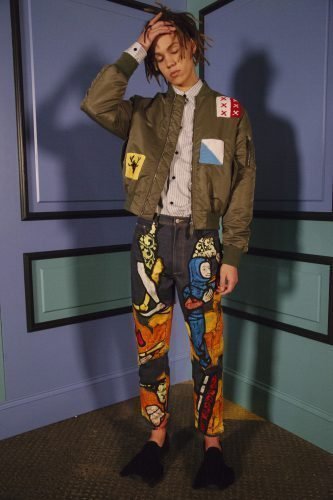 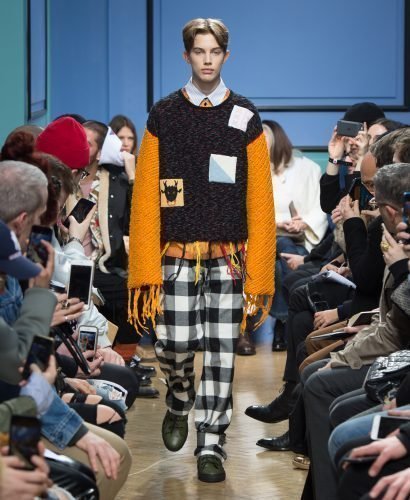 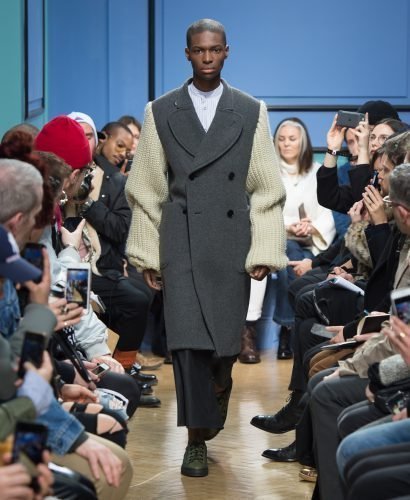 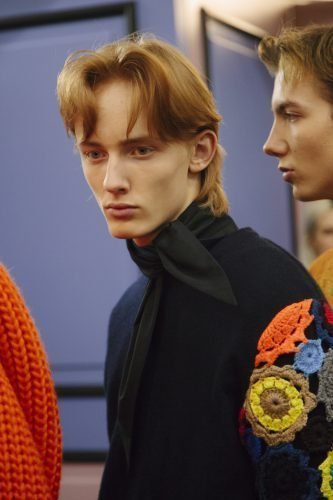 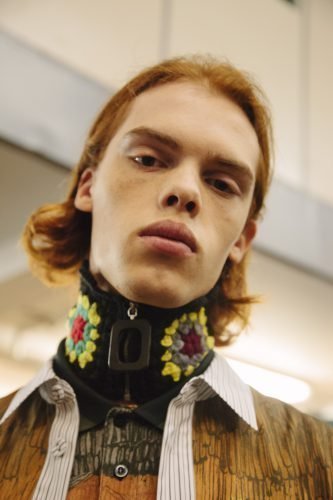 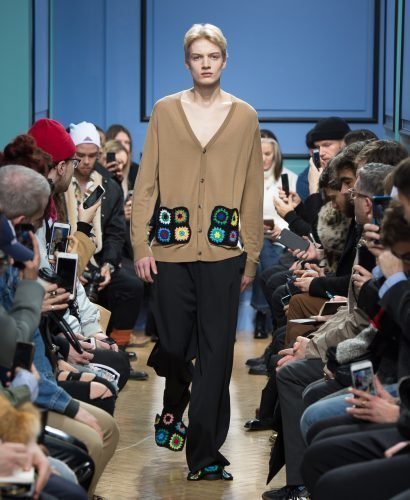 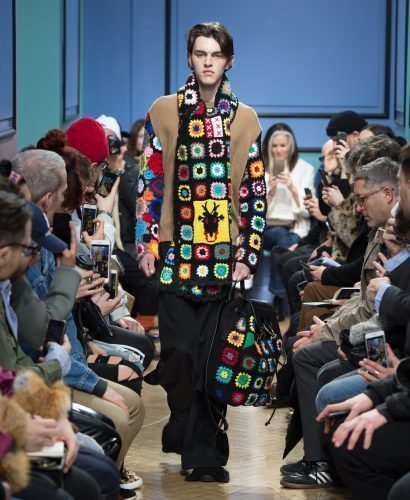 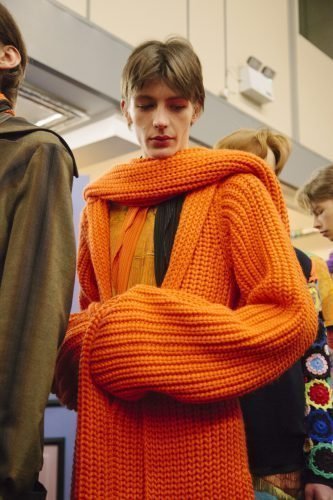