This was my first time attending Fashion LIVE! – Slovak Fashion Week Initiative in Bratislava. If Slovakia is famous for its textile production, which goes back to the Middle Ages, it is not known for its fashion brands, apart from Nehera, which shows in Paris. The event -led by Creative Director Olo Křížová- takes place every year in October, meaning that both Winter and Summer collections are shown during the official calendar. Andrea Pojezdálová is one of the country’s promising names, a humble and talented designer who presented her womenswear -as well as a few menswear looks. Sticking to black and streamlined cuts, she blindfolded all her models, creating a mysterious and occult atmosphere. Her tailoring was sharp and precise, from ingenuous jumpsuits and oversize dresses to stylish tunics and belted coats. Faced with the challenges of fabric availability and limited means of production, Slovakian designers would clearly benefit from governmental support in order to help them launch their businesses. If Fashion LIVE! offers them interesting visibility and a media presence -Pojezdálová won the Best Designer prize this year- it remains to be seen what kind of potential such collections have within a global arena. 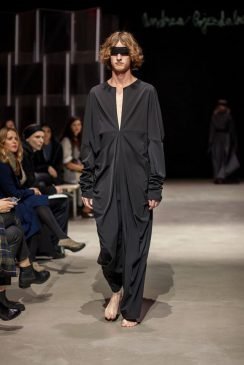 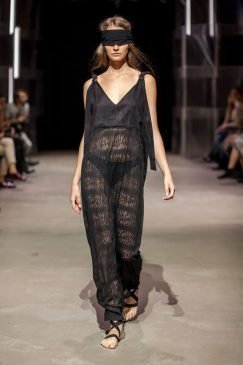