Nuno Gama’s menswear has been loved in Portugal for several decades now and it’s clear that he understands the male physique. Compared to previous seasons, this was a relatively subdued collection, where Gama focused on shape and sleek lines rather than print and embellishment. His leitmotiv for next season is the structured jacket worn with a pair of shorts, adding cheeky charm to a classic silhouette. White and pastel shades dominated the show, which hinted at Buddhism and India’s traditions: pants were wrapped like sarongs, while collarless shirts were long and minimal. Prim polo shirts, featuring contrasting collar and rib trims, had a vintage flair, evoking the effortless style of 1950s heartthrobs. The revealing swimwear worn by several models during the show reinforced this impression, leaving little to the imagination. 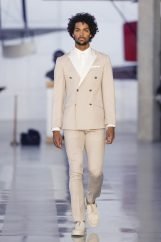 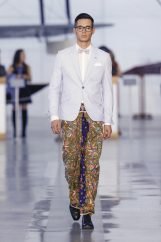 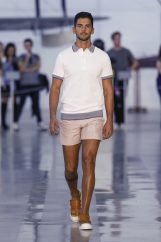