Lidija Kolovrat presented a strong and seductive collection during the last edition of ModaLisboa. Blending tribalism with deconstruction, her garments hovered between sharpness and fluidity, exposing skin in unexpected ways. It seemed that the Lisbon-based designer played with the notions of discipline and transgression, imagining complex clothes with interesting twists. Strategically placed zips revealed thighs and lower back, while jackets featured strings connecting them to lower panels. When Kolovrat moved away from her tailored precision, she explored print on easy sportswear shapes, underlining the hybrid dimension of her work. A sweatshirt morphed into a dress, while a loose, oversize top featured cape panels in the back. If the clothes were rather intricate, the presentation felt smooth and confident, emphasizing the spiritual nature of her work. 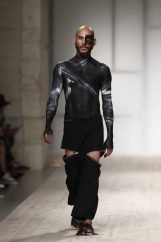 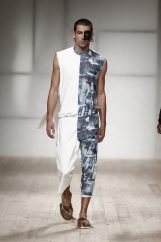 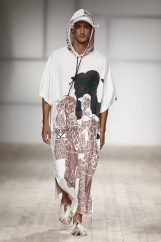