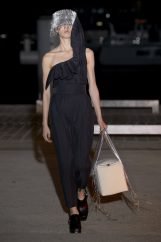 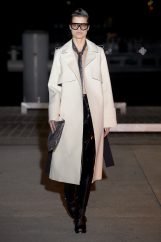 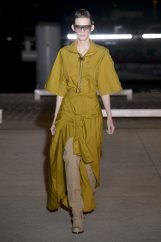 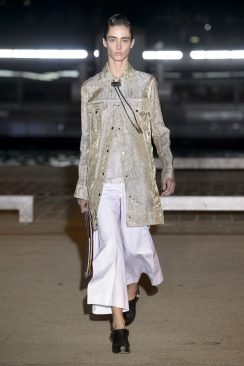 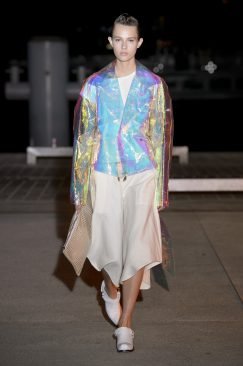 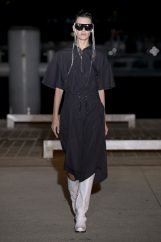 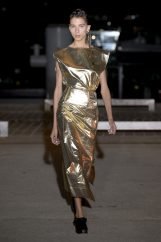 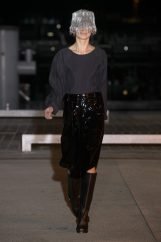 There was a celebratory feeling to Wanda Nylon’s spring 2017 collection which was shown in the bowels of the Cité de la Mode et du Design, where the graffitied columns provided the backdrop to Johanna Senyk’s first collection since her June ANDAM win.

Moving away from the transparent outerwear that first drew attention to her work, she sent a collection where the design gears were shifted higher with fare more sophisticated than ever before. Out came a one-shouldered jumpsuit, a sharply cut coat with nary a seam in sight, sleek dresses and many more tailored pieces that showcased the designer’s talent in a way that her transparent wares never did.

There wasn’t a change per se in what Senyk puts out, but it’s obvious that the incoming purse money has opened up more opportunities for experimentation with different materials. Weaves, metallized cottons, mesh, printed iridescent fabrics, pleating, the variety felt staggering in comparison to the relative simplicity of earlier collections. Also, the addition of some great collaborations, including Maison Desrues, the still-confidential Chanel Paraffection subsidiary specialised in metalwork, upped the ante.  Wanda Nylon was spoilt for choice this season, but this indulgent accumulation felt like the brand’s natural reach, rather than a forced extension.