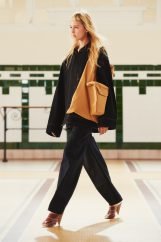 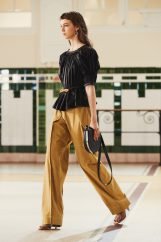 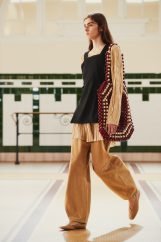 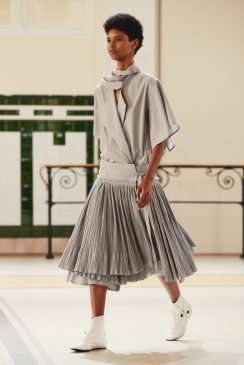 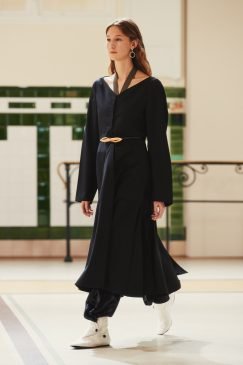 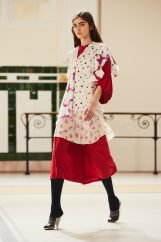 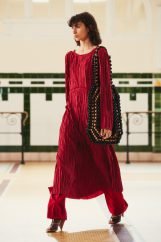 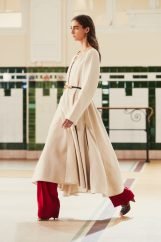 Watching the Lemaire oeuvre is like looking at a Soulages painting: it’s a study in subtle nuance that requires the right mindset. Season after season, namesake designer Christophe Lemaire and his partner Sarah-Linh Tran have made it their method to inch forward. So from them, this season’s addition of prints and beaded bags (that reminded of nothing more than the orthopedic beaded seat-coverings taxi drivers use) felt like a thunderclap in the placid summer sky.

The change here was more of a vibration than a seismic shift but here it was, the asymmetric tumble of a skirt, a touch of sunny yellow or cloudy light blue. For those who think that French people are essentially humorless, this is a subtle enough rebuttal. Throughout, their continued practice of sensual intellectualism brings out volumes modulated by drawstrings, boxy blousons from dark denim, the oddity of a drop-waist knit dress with a ruffled basque.

Therein lies the reason why Lemaire’s appointment as creative director of Uniqlo U’s Paris-based design center feels so perfect: whether at the designer pricepoint or in the Japanese retailer’s gently-priced lines, the lynchpin remains this desire to offer unstudied elegance. The difference between the two? That subtly undone lattitude that French women seem to grant themselves, something that Tran and Lemaire have always truly excelled at.