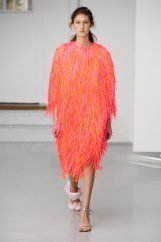 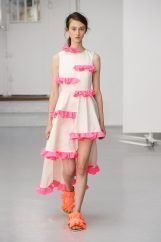 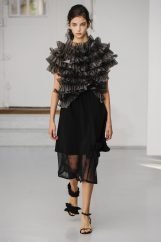 Inspired by abstract painting and the work of Sigmar Polke, Julie Paskal unveiled her latest collection on the first day of Paris Fashion Week, focusing on geometric shapes and laser-cut separates. Fluorescent tones, mainly pink, yellow and orange, added energy to her minimal garments, often trimmed with contrasting ruffles, a recurring trend this season. The dress seems to be the item Paskal enjoys reworking the most, from asymmetrical numbers to flared styles. If the collection had a feminine feel and desirable looks, it would have been nice to see some structured tailoring and sleek outerwear options to balance the prettiness.