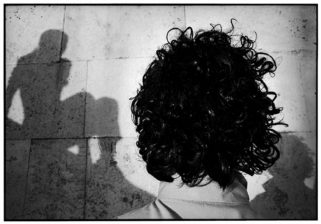 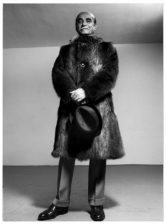 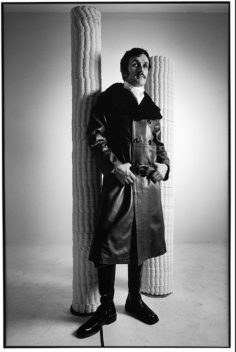 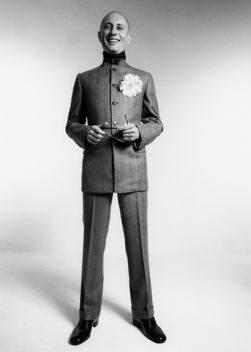 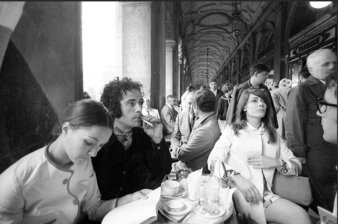 Encounters and intersections between the artist and the photographer, in an original narrative that rearranges and restores the relationships between art, fashion and publishing.

Photographs by Ugo Mulas from 1967 and 1969 will be exhibited at the Fondazione Pascali in Polignano (Apulia, Italy) which is an  ex-slaughterhouse space, just nearby the sea. The exhibition is curated by Alessio de’ Navasques in collaboration with the Ugo Mulas Archive, under the scientific coordination of Rosalba Branà.

Forty-one black and white images, rare vintage prints and little-known or never fully exhibited series trace a cross-section of encounters and crossed destinies between the Apulian artist and the Milanese photographer. A new story that rearranges and restores the relationships between art, fashion and publishing, through the pioneering experience of  L’Uomo Vogue.
It was the magazine, born in 1967, which commissioned Mulas to take the portraits of Pascali he shot in Rome in 1968. Those images codify the myth of Pascali in a new and seductive iconography and constitute the incipit to the first part of the exhibition itinerary, where this story is reconstructed as a peculiar experience within Mulas’ portraiture dedicated to artists, in this case following the distinctive perspective of fashion photography.

In the dilated time of each frame, Pascali moves, rolls around, interacts with his work Cavalletto, at moments staging a performance, and lifts his own body in a symbolic reversal. In this sequence, fully displayed for the first time, Mulas captures with his typical witness-interpreter detachment, gained in New York from observing artists – and Duchamp in particular – the characteristic traits of Pascali’s personality: his ironic verve, his non-conformism, his profound intention in the pursuit of the perfect gesture, and in his relationship with artwork.

These shots were to become his most famous portrait, a repeated sequence in the collective imagination of contemporary art: and yet only a few people know the matrix of those photos, whose origin the exhibition reassembles by rekindling attention to Mulas’s photographic production for the first issues of  L’Uomo Vogue.

Actually, between the late 1960s and the early 1970s, the magazine, under the artistic direction of Flavio Lucchini is a ground for experimentation and research, in the sign of an Italian creativity so fresh and radical that it makes the publication a unicum, distributed worldwide. Fashion is the medium that provides form and expression to a more liberal representation of the Masculine, giving space to new codes, opening up new dressing options for the man who in those years is liberated from the formality of the traditional suit to wear, nonchalantly, furs, Korean-style jackets, outerwear of military inspiration. To portray this epoch-making social change a number of artists, singers, famous and unknown actors, directors, creative people of all kinds, “all those who had a strong personality, a novel, unusual, peculiar image,” as Lucchini himself recalls, were chosen to replace professional models.

The exhibition shed light on the little-known history of this seminal experience in the international editorial scene, reconstructing – for the first time through the entire sequence – two of Mulas’s most stunning fashion editorials published in the very first issues of the magazine, the one with the artists in fur from 1967 and Sette più sette artisti d’oggi le loro opere i loro abiti from 1969. Prominent figures in the cultural scene of those years, from Lucio Fontana to Ettore Sottsass from Alighiero Boetti to Aldo Mondino, Tommaso Trini, Getulio Alviani and many others posed for these series. On this occasion, Mulas shot the most iconic portrait of Giangiacomo Feltrinelli, publisher and militant revolutionary, among the famous patrons of the Bar Jamaica in Milan. The picture shows him elegant and dandy-like, in astrakhan and shapka, as a character from Pasternak, whose books he had been the first to publish in Italy. In the 1969 fashion editorial the magazine posthumously published an image of Pascali taken in Rome the previous year: all dressed in black, with sandals and a scarf around his neck, true to his “uniform” as an artist wearing second-hand clothes from Porta Portese, in a form of resilience to the seduction of fashion and communication.

Coeval with the portraits in the studio – and perhaps equally intended for L’Uomo Vogue – are the photos of Pascali with his then partner, Michelle Coudray, on the Lungotevere, in which Mulas eternally fixes, in the dazzling backlight, the myth of youth, along with the spontaneity and joie de vivre of the couple’s gestures. The shot with Pascali portrayed from behind – almost a presence evoked by an aura of shining curls with Michelle’s shadow in the background – is another well-known image of the artist, which also appears reproduced in Carla Lonzi’s famous book Autoritratto. The exhibition succeeds in contextualizing this photograph, piecing together the entire sequence of that day.

The second part of the exhibition frames the encounters between the two artists, over a few months, before the artist’s untimely death in a tragic accident in September 1968.

In Venice, during the ’68 Biennale, Mulas is in the midst of making a reportage dedicated to the event:  for the photographer this is a kind of grand theatre, a seamless happening that raises questions of duration, problems of composition, of rendering movement, where the eye of the camera is the perfect tool for a deeper understanding, the gaze that instantly unites the genres of photo-reportage and portrait.

The last encounter between the two artists is posthumous, at the exhibition Vitalità del Negativo, curated by Achille Bonito Oliva at Palazzo delle Esposizioni in 1970. On this occasion, Mulas captured the 32 metri quadrati di mare circa, seizing its iconic presence in a series of seven images, also presented for the first time in their original sequence.