As part of the ASVOFF 8 program, Mr Colin McDowell presented the history of The Woolmark Company. McDowell continues to hold one of the most authoritative voices in fashion, and Woolmark, with it’s rich history, is the driving force behind the finest and softest wool in the world. Together for about an hour in the Petite Salle in the Pompidou Centre, these two leaders created something quite special; far from a dull recount of a company’s timeline, McDowell was charming and generous with his personal anecdotes, and was fittingly accompanied by a collection of films of equal intrigue.

One such film was from an early edition of the Woolmark Prize in 1953, when Mr Yves Saint Laurent and Mr Karl Lagerfeld won awards. Another from 1961 showed the new collection of designs with the Sydney Harbour Bridge in the background, tagged ‘Australian fashion by Australian designers in wonderful, versatile wool.’ This film was entertainingly kitsch, though Mr McDowell assured us that only the most sophisticated city ladies would wear such outfits.

It was exactly these insights that gave such wonder to the world of wool. As mentor to the designers in the relaunched International Woolmark Prize, and one of the most revered fashion writers, it goes without saying that Mr McDowell knows his wool. But it were these little titbits, like "just after the Second World War – yes I’m that old – my grandmother sent me knitted underwear," that opened the space to laughter and affection for McDowell’s honesty. He explained that you’d think this incident would put him off wool, but sporting mostly wool-based garments on this day, both him and Woolmark are testaments that truth and honesty endures, even in such a flighty industry like fashion. 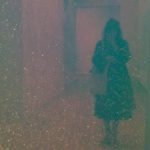