IRIS—the documentary about nonagenarian fashion icon Iris Apfel, directed by the late, great Albert Maysles—is in theaters now here in New York City and rolling out across the U.S. over the next two months (with a planned release in Europe, as well). Recently, A Shaded View was invited to a press conference for the film, so I had the honor of having tea with Ms. Apfel at the elegant Carlyle Hotel. After an eclectic bunch of journalists and bloggers gathered around a table festooned with haute pastries and finger sandwiches, Ms. Apfel made her entrance—exhausted from hours of interviews and promotion. 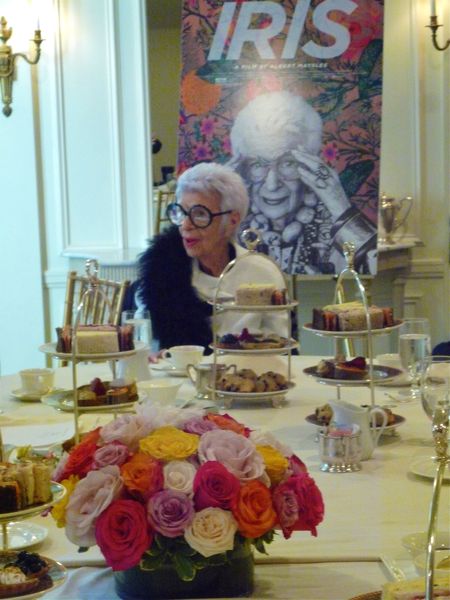 When it came time for questions, Iris was adorably cranky, and none of our queries pleased her or drew a smile no matter how hard we tried. Frowning, she bemoaned the lack of style creativity amongst today’s millennials. “Young people have no sense of history. Fashion schools don’t teach history. They think the world started with Tom Ford.”

“Young people have an appalling lack of curiosity,” she continued. “They think all you have to do is push a button and you’ll get an answer. Instead, they should involve themselves and get into the process.”

“Fashion is a reflection of everything that goes on in a period: psychology, economy, politics, aesthetics….a lot of designers go to a thrift shop and they change a button or a pocket but they don’t know why.”

Still, Iris thinks that “people who just think about fashion are pretty dopey.”

I loved Iris’ observation about travel. “Traveling can open your eyes. However, a lot of people look but they don’t see.”

Regarding women who have influenced her, Iris cites Pauline de Rothschild and Millicent Rogers—but it’s more Rogers’ turquoise museum in Taos, New Mexico that interests her. “Objects are my friends.” (This is a point that is explored at great length in the film, particularly the scene shot in Iris’ warehouse in Long Island City.)

When the inevitable click-bait baiting question was asked by one of the bloggers at the table—”What did you think of Kanye West when you met him?”—Iris understandably groaned. “She hates this question,” said one of the publicists.

“He was very pleasant but I didn’t know who he was. What does he know about designing clothes? These days, everyone wants to be a designer.”

Iris has been happily married to her husband Carl for 67 years. (Carl turns 100 years old during a memorable scene in the film.) Iris loves what a woman who was celebrating her 75th wedding anniversary told Johnny Carson when he asked, “Did you ever once think of divorce?” 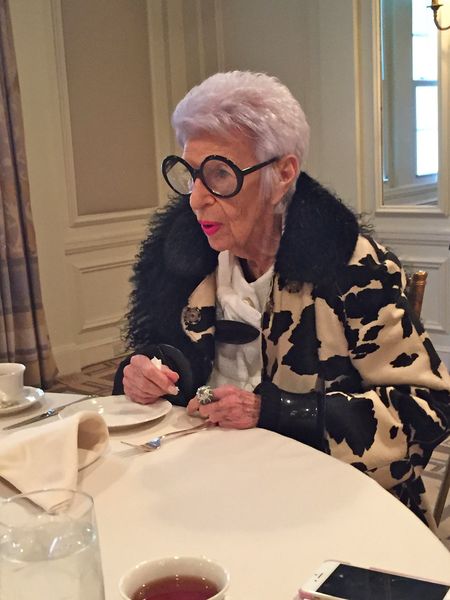 During the interview, a melody emerged from beneath the folds of Iris’ cow-print coat. She dragged an iPhone 6 Plus out of her inner pocket and exclaimed, “Look at this monster! I’ve been forced to use this thing ever since my lovely clam-shell telephone fell into the bathtub!”

I wanted to know about the years that Iris worked on and supplied fabrics for restoration projects at the White House for nine presidents: Truman, Eisenhower, Nixon, Kennedy, Johnson, Carter, Reagan, Ford and Clinton.

She was reluctant to share any anecdotes but I thought I would try to draw out something about Jackie Kennedy (whom her husband Carl brings up in the film before Iris abruptly shooshes him).

“When Jackie Kennedy wanted to re-decorate the White House…” I began.

“NO ONE has ever re-decorated the White House,” she scolded me. “You can’t do that. You can only do an historical restoration. Jackie TRIED to re-decorate the White House in that French style she liked, but she drew the wrath of the design community.”

I, of course, relished that tidbit, having had an unfortunate experience with the Met Costume Institute in the early ’00s after I penned a quasi-satirical piece about the Jackie Kennedy exhibit for the seminal DUTCH magazine. 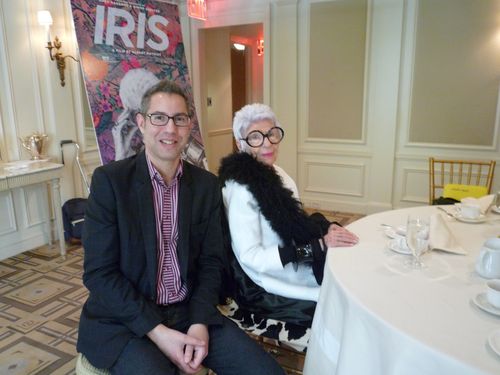 After the tea press interrogation, we all got to pose with the woman of the hour. I handed my (real) camera to the young, pink fun-fur chubby-clad editor from Wild magazine. I had to spend a few moments directing her (ah, the selfie generation) as she thought pointing the camera from a very low angle would produce flattering results. After several minutes, Iris muttered in my ear, “Oh, c’mon already! What’s wrong with her? Take the picture already! I’m exhausted and I wanna get outta this place.”

When I grow up, I want to be a lovably cranky 93-year old Jewish woman. (Actually, if you talk to some of my co-workers, they will confirm that this transition has already occurred.)

There was a rather amusing moment with the editor from Wild magazine. During the Q&A, she said, “We ask everyone this question: What wild dream do you have?” Iris threw her a sour frown and said, “Honey, I’m 93. I don’t have any ‘wild dreams’.” 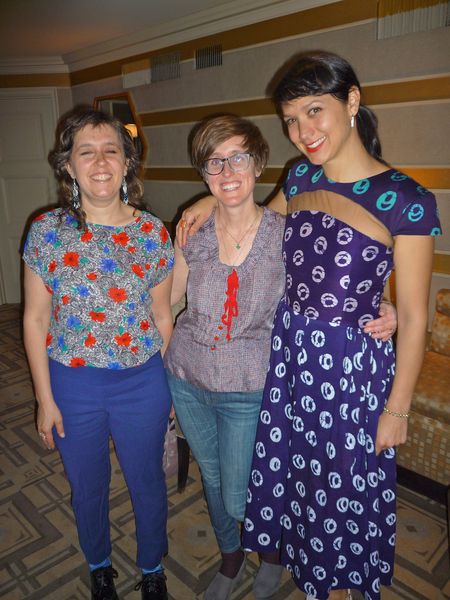 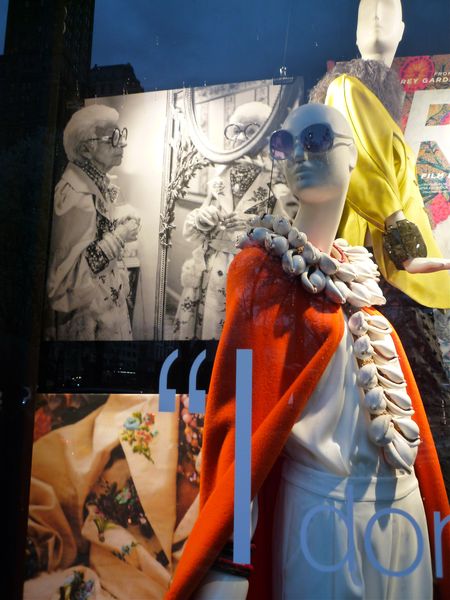 I was lucky enough to get invited to the New York premiere of IRIS, which was held at my favorite movie theater, the Paris. Before the film, I checked out Bergdorf Goodman’s tribute window to Ms. Apfel next door to the theater. The film is delightful and poignant. One of my favorite scenes is when Iris goes shopping for wildly patterned dresses in Harlem. “You gotta haggle with the sellers, it’s expected. If you don’t haggle, you will completely ruin their day.”