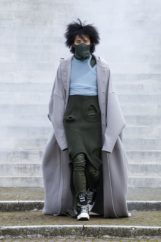 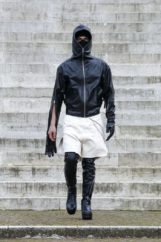 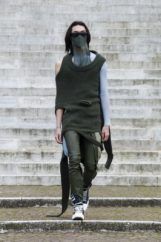 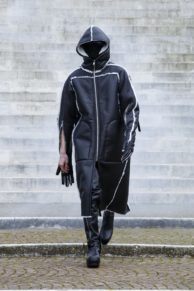 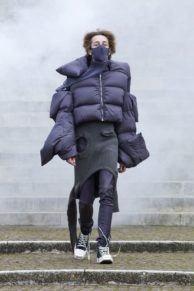 At the garden of Gethsemane, Jesus took Peter and the two sons of Zebedee and said to them, “My soul is overwhelmed with sorrow to the point of death. Stay here and keep watch with me.”

For AW21, Rick Owens chose to name his collection Gethsemane, the garden in which Jesus prayed before his crucifixion.

“A place of uneasy repose and disquiet before a final reckoning. We ’re all living a tense period in history waiting for a resolution, be it catastrophic or rational, in a suspense that feels almost biblical in its drama” read the show notes for Rick Owens.

The show once again took place in Lido Venice, where the designer has been staying since the beginning of the pandemic. Cameras surveyed spaces, following the movement of the models as Hellrap by Ghostemane played in the back.

What appeared from the smoke were hooded figures, bodies lost beneath coats, faces covered with masks… It was an army of mysterious figures moving across from one space to another. Their expressions were hard to tell but the attitude overall was clear. It was mischievous, powerful and tough. The collection was once again quintessential Rick Owens, the clothes felt resilient, worn as a display of power, as if they can withstand any condition they were put into. But yet, underneath the layers, the bodies seemed vulnerable. In need of protection from unknown threats.

Leather jackets and coats were integrated with gloves to eliminate the feeling of touch, heavy recycled cashmere sweaters twisted around the bodies as coats of protection, leather body suits were worn as second-skin armours, the bodies hid beneath deconstructed bomber jackets…

A display of the agonistic state of men. Beauty within the chaos.

To see more of the collection, go to: www.rickowens.eu