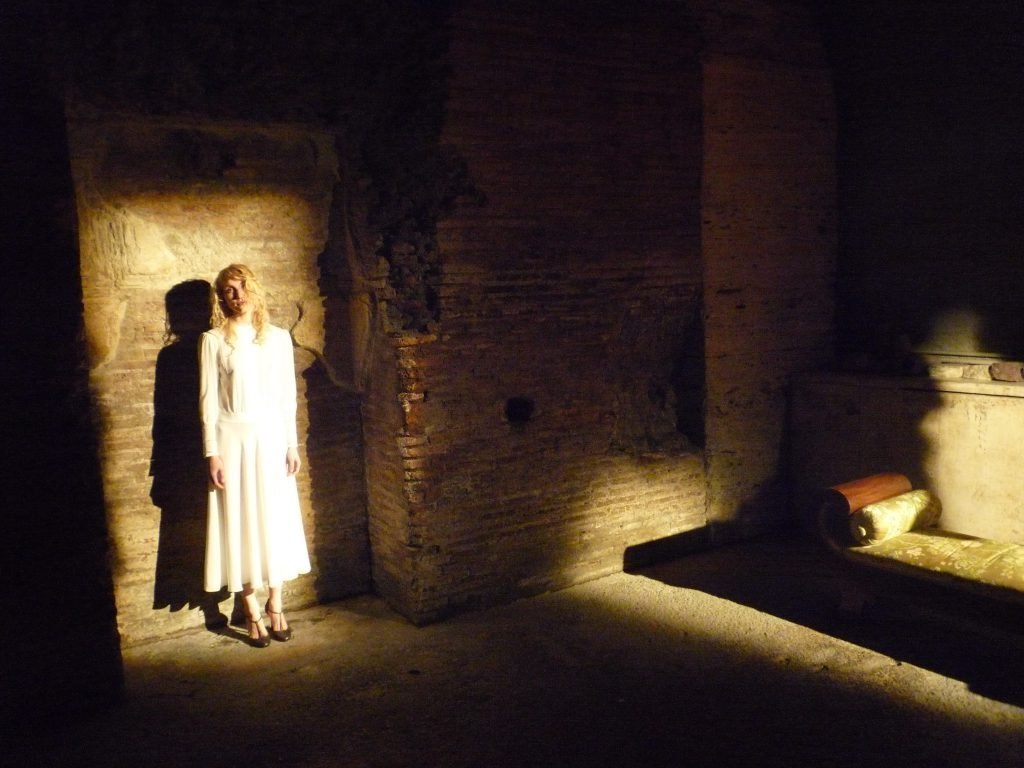 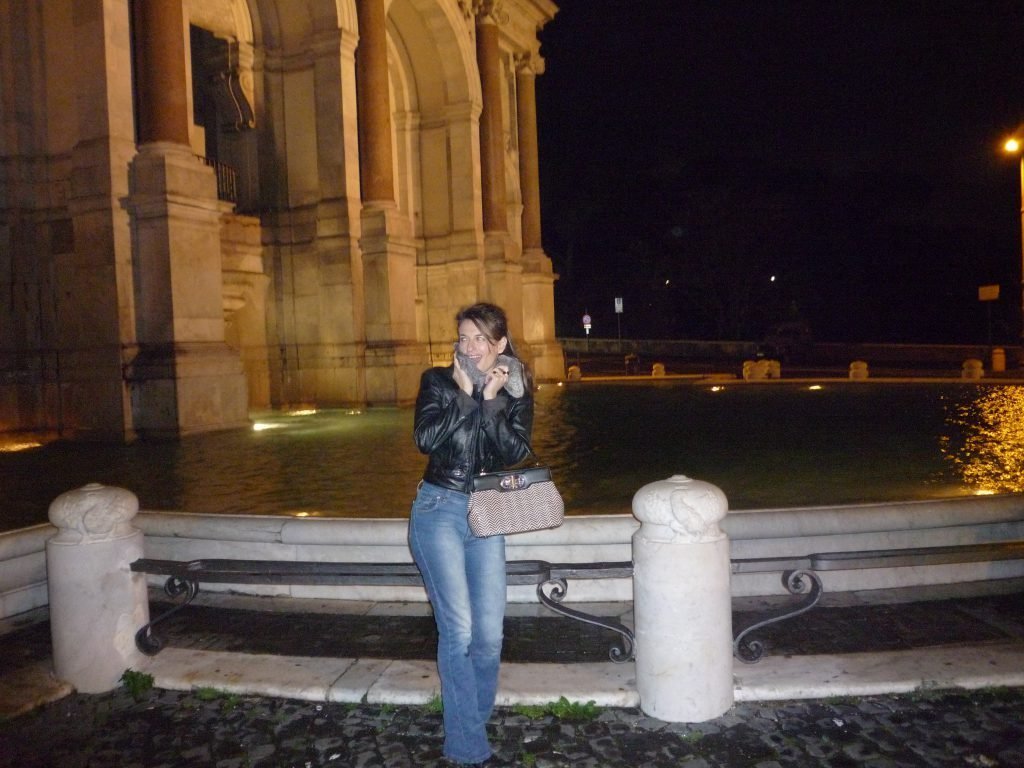 1. Ludovica Amati chose the ancient ruins of a sports stadium as the stage for her elegant Fall/Winter 2014-15 collection.

2. The young actress Anita Kravos, star of the Oscar®-nominated La Grande Bellezza, was one of the models. Here’s a shot I took of her in Trastevere in front of the fountain that appears in the film’s stunning opening scenes. 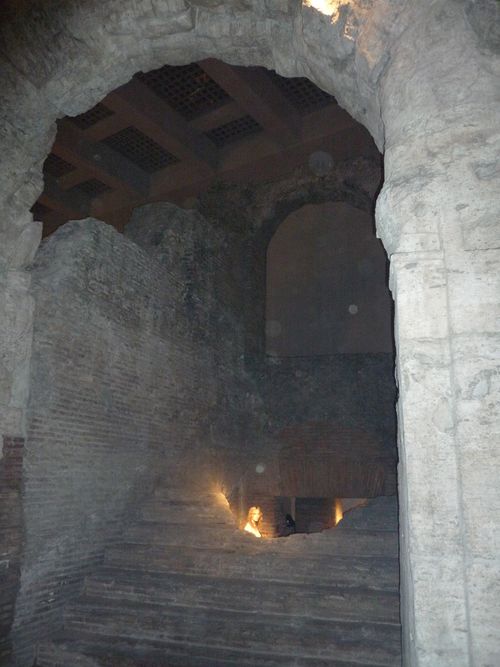 These particular ruins are the remains of the Stadio di Domiziano (Stadium of Domitian), or Circus Agonalis, patterned after the Greek model of stadiums. The Stadium was commissioned around 80 A.D. by the Emperor Titus Flavius Domitianus as a gift to the Roman people.

Centuries before athletic competitions were poisoned by corporate branding, Slavic despots and cupcake journalists tweeting photos of ramshackle hotel rooms, games were held at the Stadio di Domiziano, starting around 86 A.D. This was Rome’s first permanent venue for competitive games and, of course, one can only imagine the strapping young men who ran, jumped and wrestled their way across this stadium. Naked. 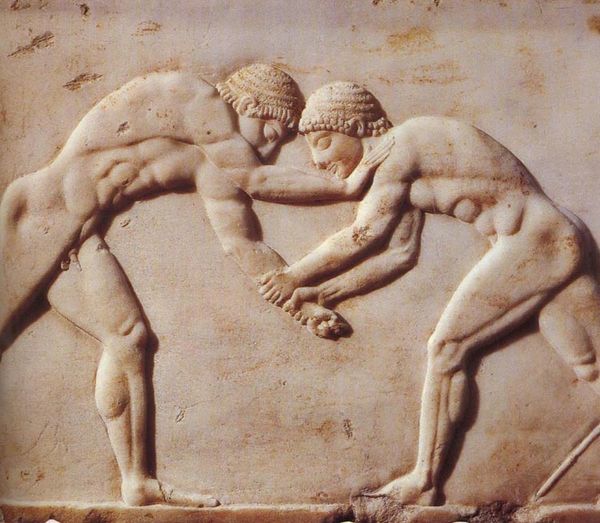 And now, back to the fashion show…. 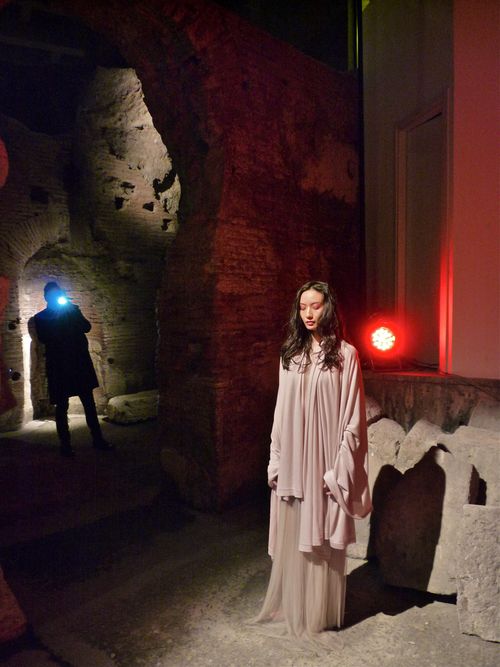 The protagonist of Ludovica Amati’s Fall/Winter 2014/15 collection is “a turn-of-the-century traveler transformed into a star of the contemporary world.” The long organza dresses, ultra-sheer blouses and monastic coats were shown on models and three Italian actresses: Regina Orioli, Anita Kravos and Sveva Alviti. 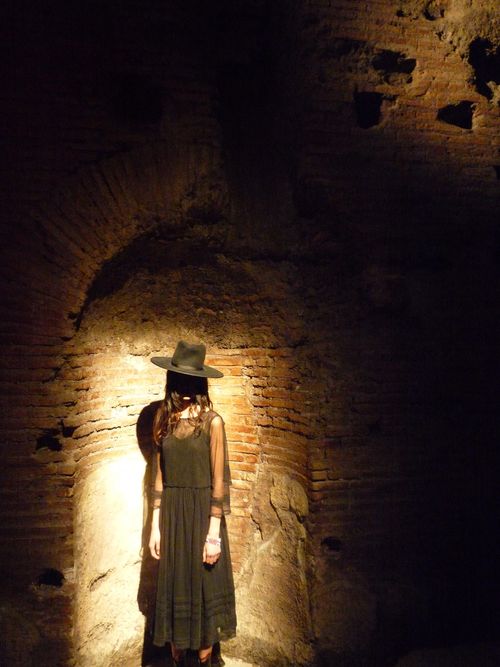 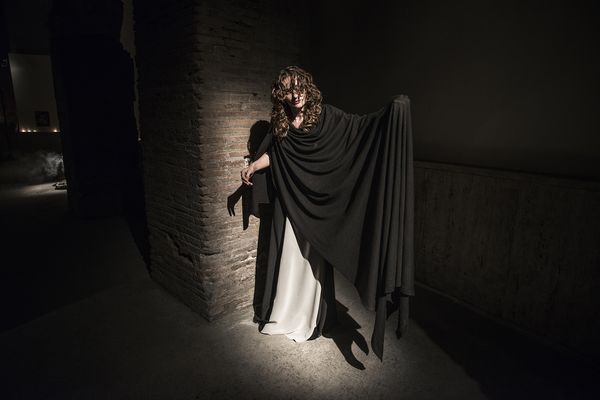 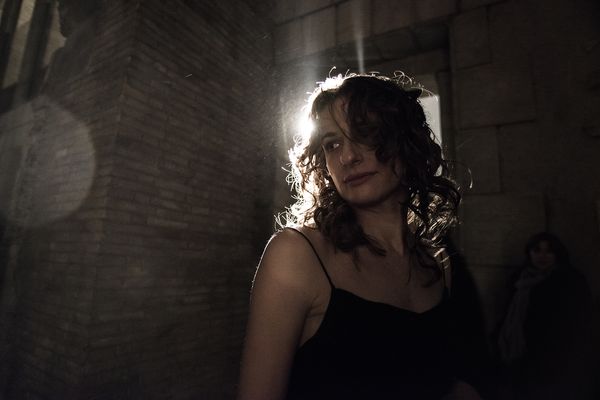 I met Anita Kravos in the bar of the Locarno Hotel, where I stayed after Alta Roma was over, and took this photo of her. Alessio de Navasques of Alta Roma introduced me to her and we (including fashion journalist Samantha Cantini) all enjoyed cocktails, witty repartee and the marble toggle on Anita’s Bulgari bag (named afer Isabella Rossellini) before heading out to wander the gardens of the American Academy and indulge in an elegant dinner. 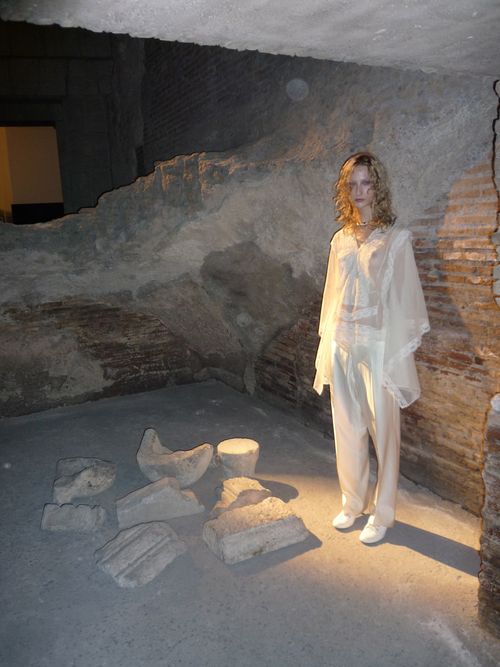 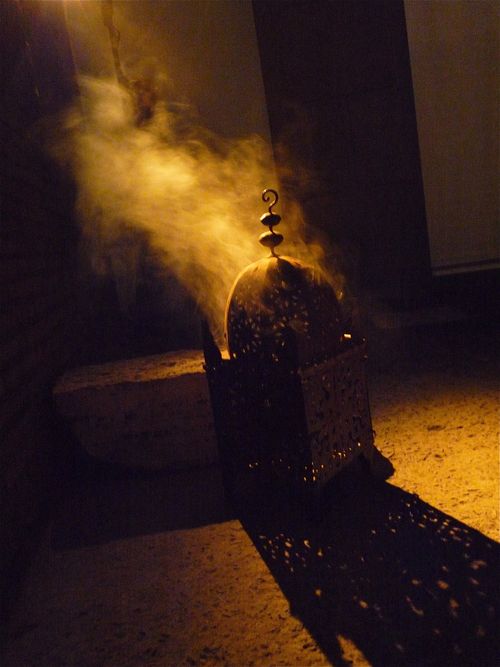 Burning frankincense set the correct mood in the ruins. 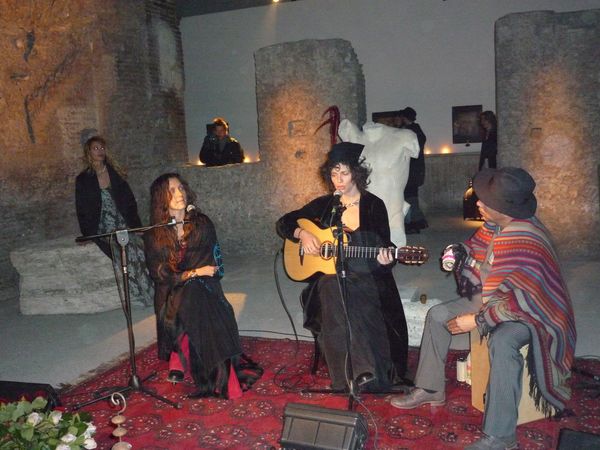 We were treated to a mystical musical performance by some mysterious, unnamed “medicine women”….and I think the gentleman in the poncho is a medicine man?

“The sound and melody, even without the accompaniment of words, penetrate our hearts to change us, putting us in touch with our innermost being, the highest and purest dimension of ourselves,” says the designer. “For this reason, I decided to present my collection through the song of two medicine women, to ensure that my garments are the bearers of a strong, spiritual message, just like my past collections.”

Ah, youth! The music did set an interesting mood and made the whole thing feel like a “Happening.” Incense and peppermints, the color of thyme… 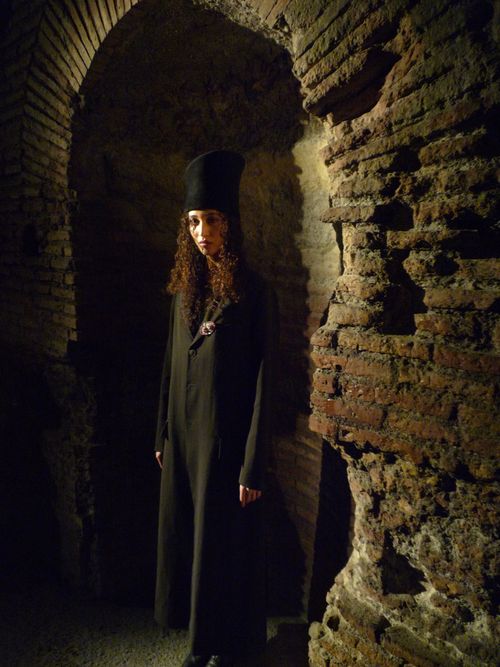 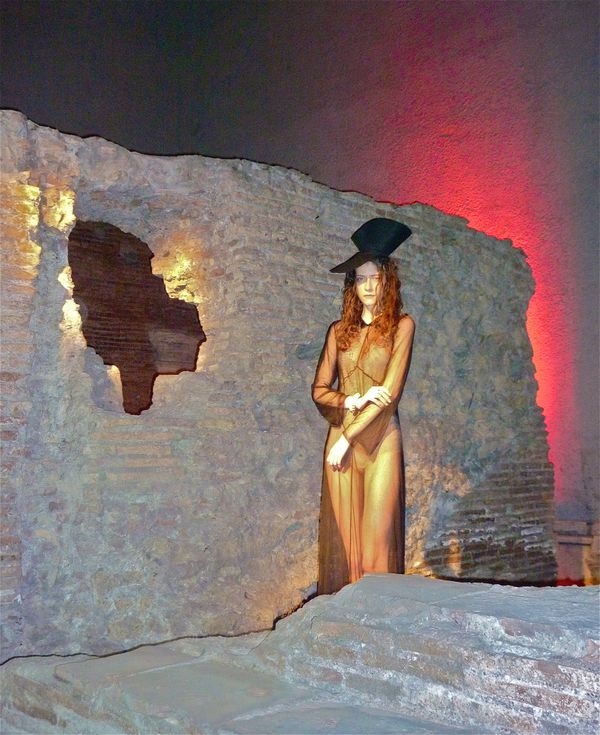 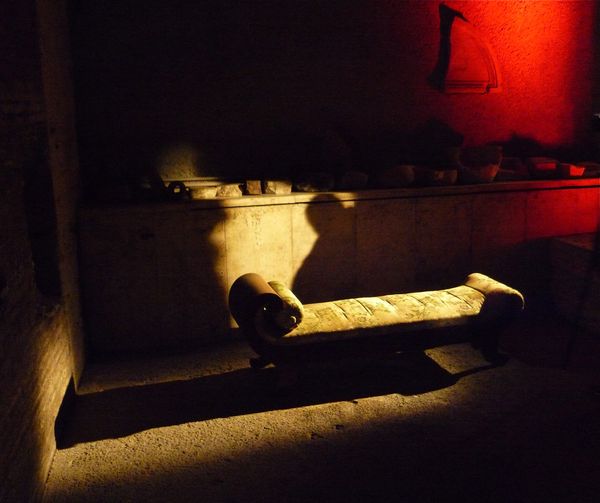 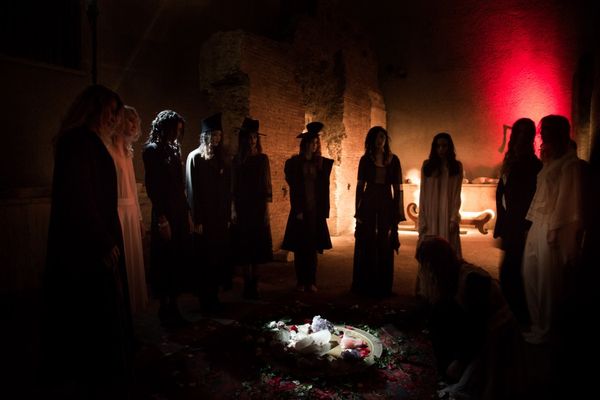 Reminds me of a witches’ coven. Divine! The crystals are actually artisan perfumer Meo Fusciuni’s scent-sational Icon installation for this event. He writes:

“The nine essences described by the nine icons embody the past, future and contemporary compositions of my research, incenses, resins and fragrant mixtures, nature and synthesis at the service of all things sacred, of the most animal-like marginalization of the human soul. From Pasolini to Sant’Agostino, from Sufi trajectories to Hebrew mysticism, from Hinduism to the sacred face of a woman, everything is necessary, all of this symbolizes the first step taken by Icon, which marks the beginning of my new journey.” 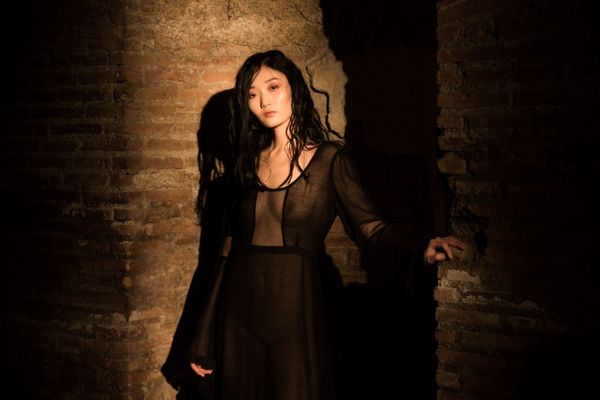