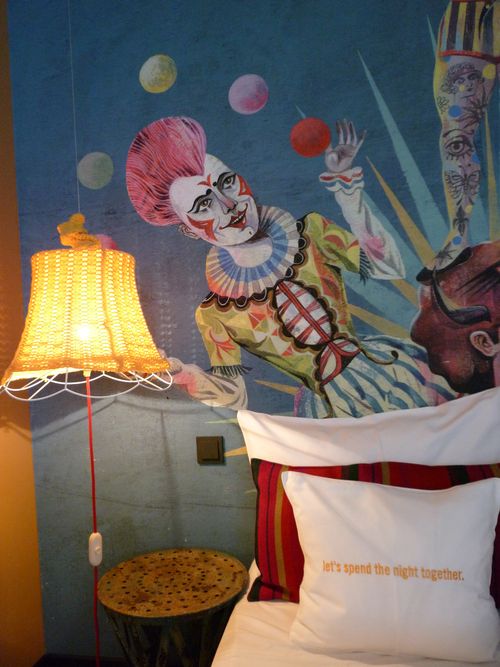 Last month, during MQ Vienna Fashion Week, I stayed at the quirky 25hours Hotel located at the border of Vienna’s newly trendy 7th district and steps away from the wonderful MuseumQuartier (so you can get your fill of Egon Schiele AND hipster thrift shops). The 25hours Hotel reminds me of a few things: the Ace Hotel & Swim Club in Palm Springs, the Lloyd Hotel in Amsterdam–and a time-traveling Bozo the Clown on acid. But really, it’s like no other hotel that I’ve ever stayed at.

The lively “show” mood of the hotel is right in step with many Vienna institutions: the Prater, the Opera Ball, the Life Ball and the city’s many music and theater venues. The building that is now the 25hours Hotel began its life in 1971 as a 6-storey student dorm designed by architect Dr Kurt Schlauss.

25hours–a mini empire with hotels in Austria, Germany and Switzerland–opened their property in Vienna in March 2011 after being refurbished by the Viennese firm BWM Architekten und Parnter. The second phase of the hotel was unveiled in April 2013, with 219 guest rooms spanning 7 storeys–topped by the wildly popular Dachboden bar on the 8th floor. 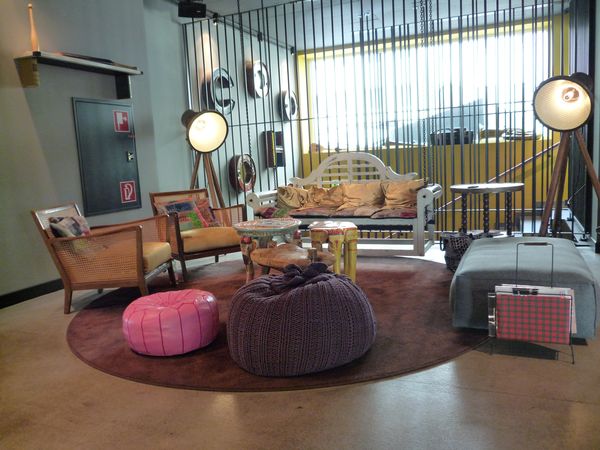 Above: In the lobby and elevators, bars are used to evoke the animal cages at circuses. Now they’re used for….party animals! *rim shot*

Headed by Armin Fischer, the Augsburg-based design team Dreimeta was responsible for the hotel’s aesthetics and design. A humorous take on the world of spectacle. Sexy and surreal fantasies inspired by Vienna’s circus legacy. In 1808, a permanent circus opened in Vienna’s Prater amusement park. Throughout Europe, the circus experienced its heyday in the early 20th century when it was a combination of a freak show, a chance to gawk at people from faraway lands, and vaudeville entertainment.

With this in mind, Dreimeta gathered together and revamped vintage finds from this period, without concealing the age of the pieces. They sought out memorabilia with a story to tell. “Juggling clubs, trapeze wires, chairs and desk lamps–we trawled countless flea markets, hunting and gathering,” recalls Fischer. “Everything at the circus is temporary and can be put up and taken down quickly. The troupe uses the venue they find themselves in and make the best they can of it with simple means. We wanted to give the hotel an improvised feel too, while still making it seem cosy and not unfinished.” 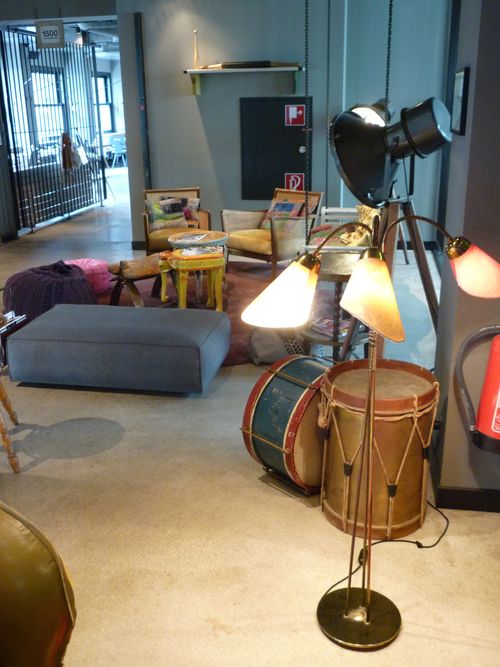 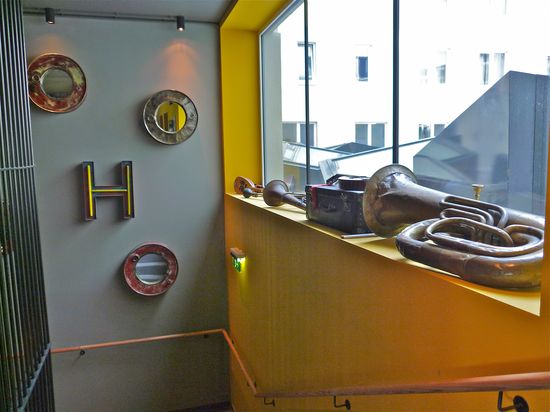 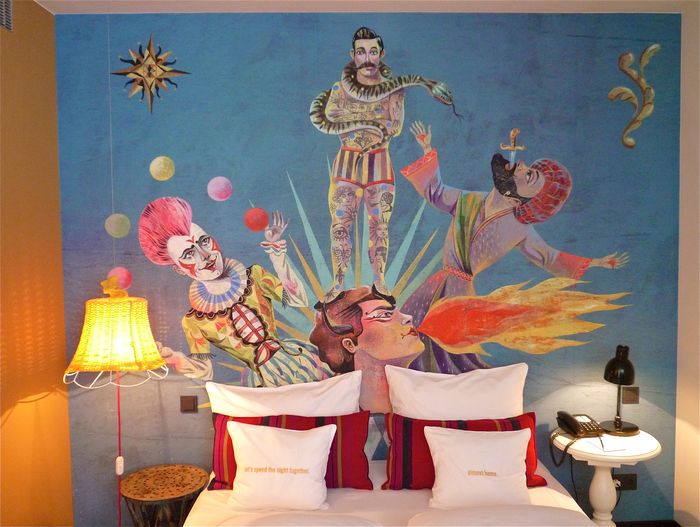 After soaking up the hotel’s “Euro hipster backpackers run off and join the circus” mood, I was prepared for whatever my room was going to throw at me….Luckily, I’m not clown-phobic (unlike so many others) so I was delighted by this whimsically frenetic mural behind the bed of my rather spacious suite. I wondered what kinds of dreams I would have in this bed (nice ones, it turned out)….and would it scare off any male suitors who might find themselves in my suite…(no, thank god.)

The mural behind the bed and all of the other 19th-century circus-themed paintings in the hotel are by Berlin-based artist Olaf Hajek, one of Germany’s best-known illustrators. They were my favorite element of the hotel. 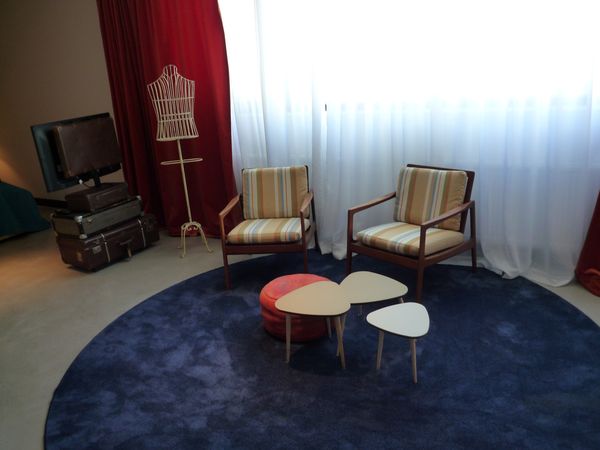 I liked how this plush blue rug was used to delineate the “living room” area of the suite….the round rug and others around the hotel are an indirect allusion to a typical circus ring. 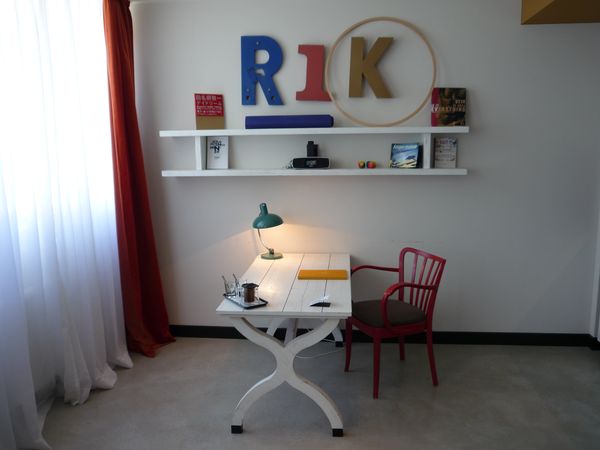 The office area of the suite (and there’s a kitchenette, complete with dishwasher to the right, not pictured). This is a bit of a gonzo aside, but I can’t hold it in: the mismatched letters and numeral 1 on the wall remind me of an obscure feud between Barneys New York’s former creative director Simon Doonan and artist Jack Pierson. Pierson claimed that this style was his intellectual property and that Doonan had stolen it for displays at Barneys Co-Op. 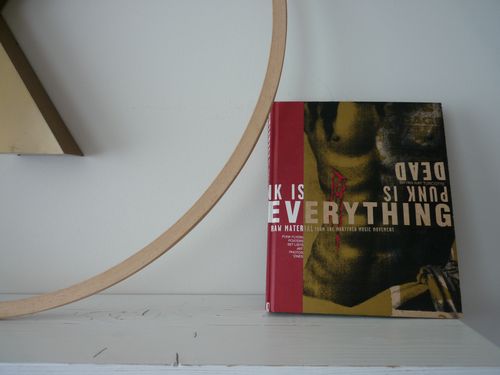 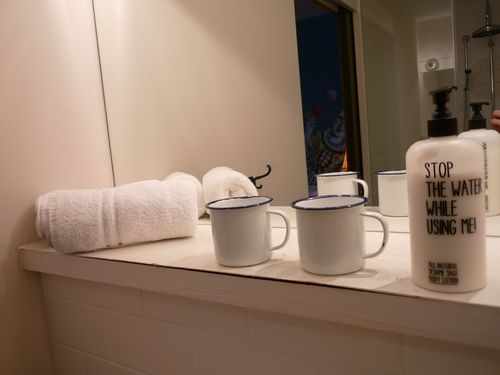 Even though the hotel is technically 3 stars, one of the many things that imbues an overall luxury feel are the bathrooms. My suite had a cavernous rain shower that was big enough for a circus elephant, and included copious amounts of sustainable bath products. The lighting in the bathrooms is reminiscent of a performer’s dressing room (and they were flattering) and the taps have a nostalgic feel. 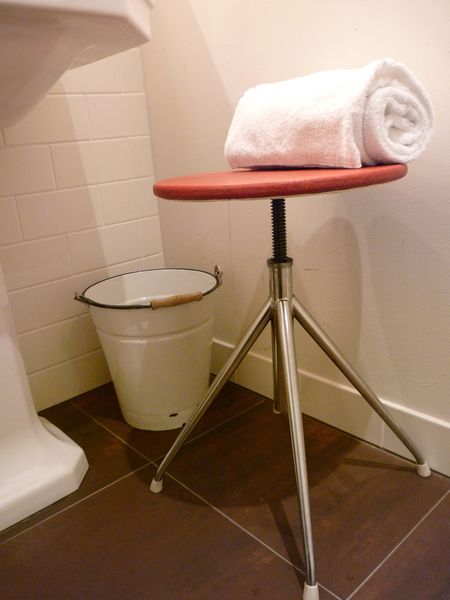 The fixtures, like this stool and the waste bucket, feel like they were plucked from a circus trailer. 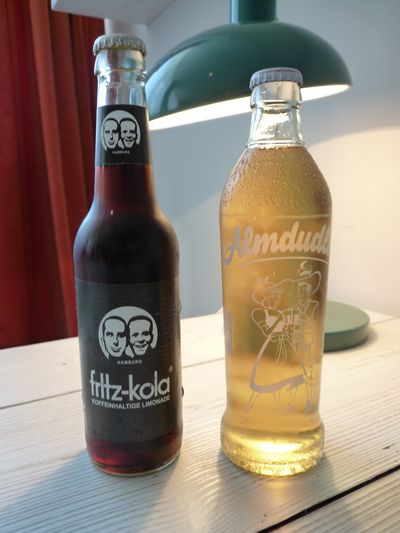 I don’t drink soda but I love the designs of these bottles from the mini bar. What I did partake in was the complimentary tins of high-end aromatic teas that were replenished daily. 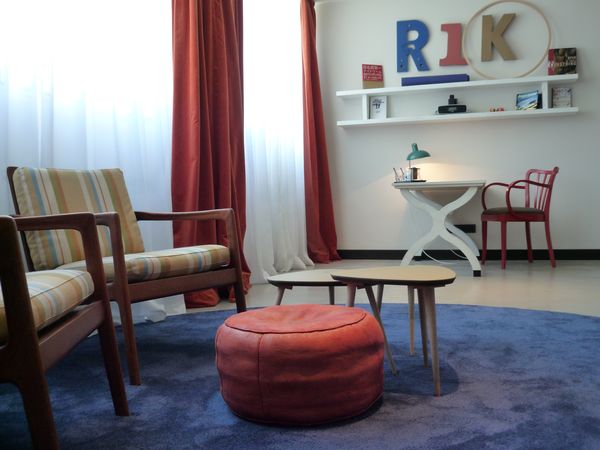 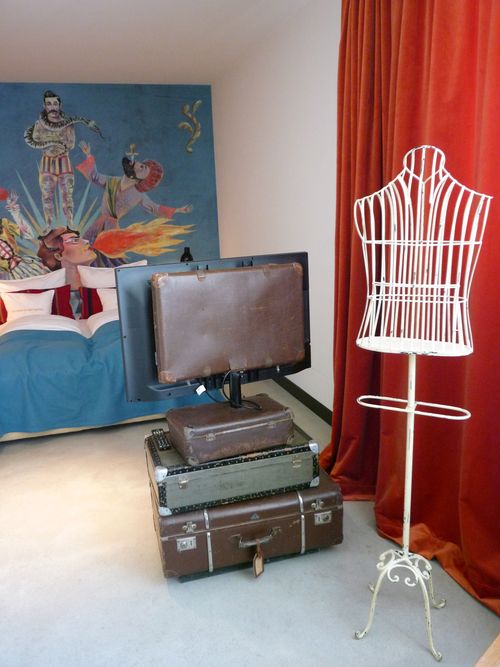 Vintage luggage stacked and repurposed as a display for the flat-screen TV. Clever! And who could not love this turn-of-the-century clothes form. 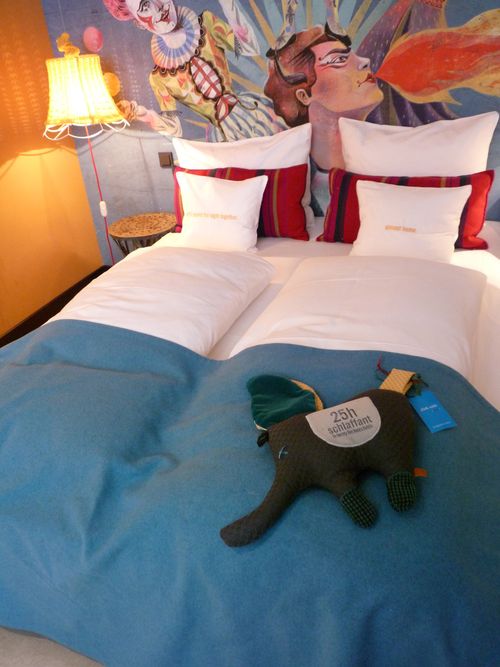 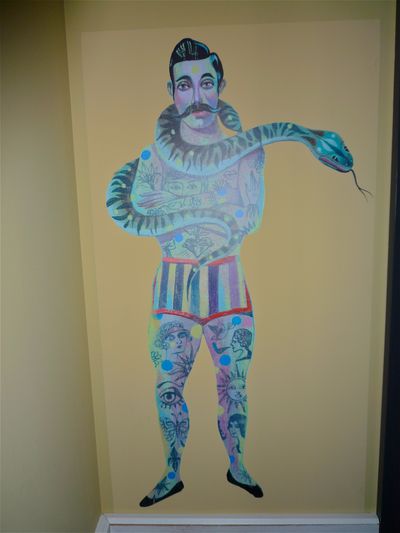 Each room has its own mascot outside the door….I had the illustrated man snake charmer… 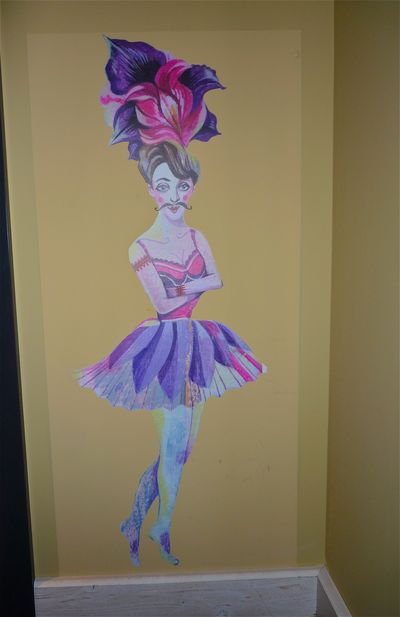 And who doesn’t love a good transgendered trapeze artist…. 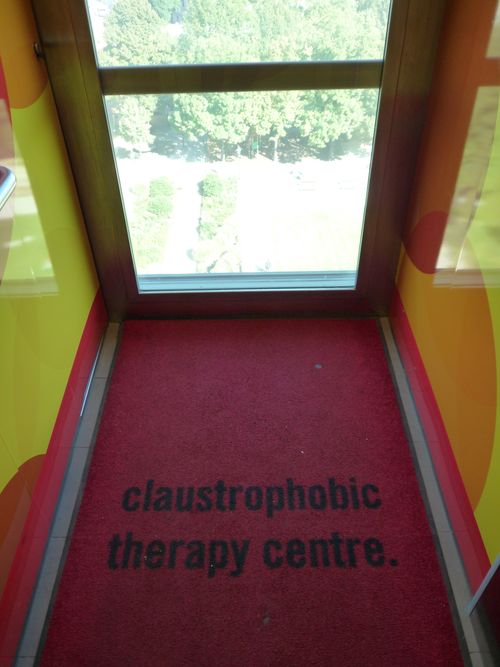 As a copywriter, I couldn’t help thinking that this hotel project was some copywriter’s dream job….the design of the hotel is very copy-heavy….for each room, instead of a Do Not Disturb/Please Clean My Room sign, there is a BOOK with red and green pages of 25 sometimes-witty, sometimes-annoying slogans to choose from: “it might not look like it, but it was fun”   “it’s the 25h hotel. i need an extra hour.”  “police crime scene. move on.”   “still naked.”   “imagine the rolling stones stayed in the room.”   And so on. 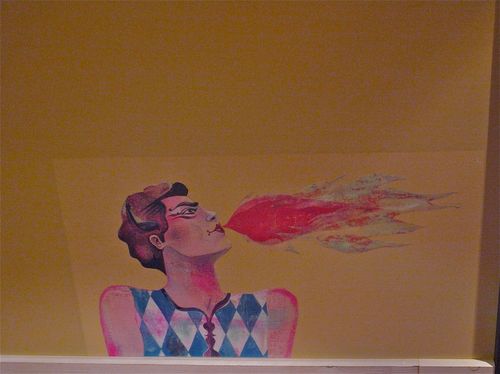 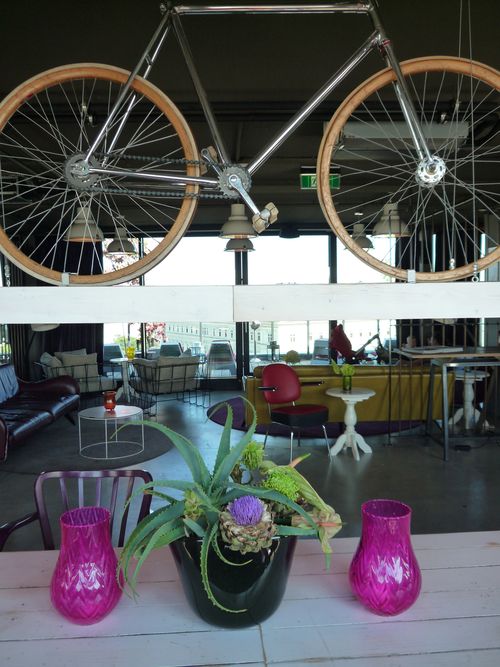 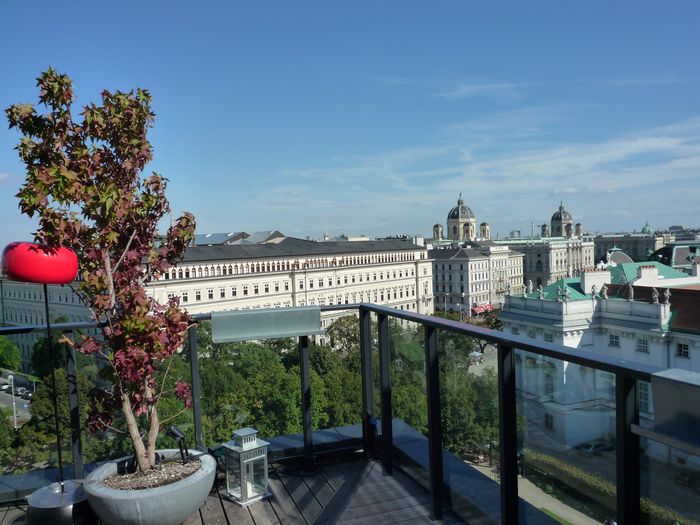 Out on the deck, it’s all about the view….on a clear day you can see Maria von Trapp. 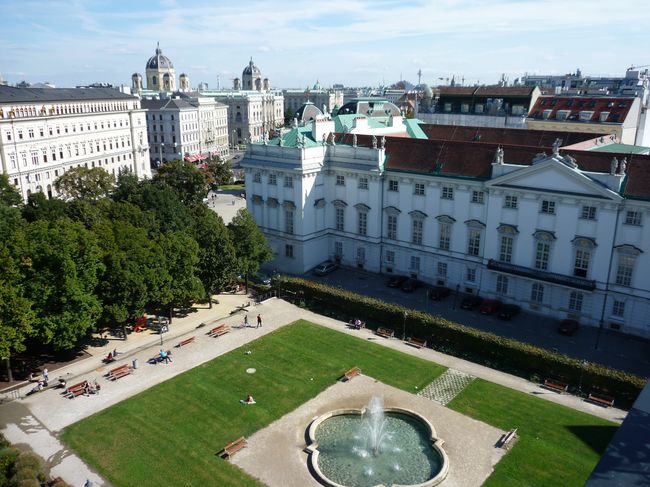 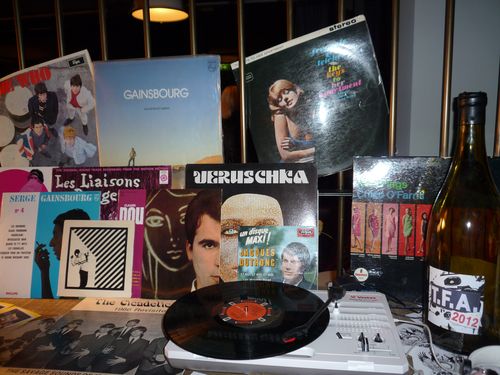 Normally, hipster vinyl-only DJ booths get on my nerves, but as this is Europe, the taste level is higher and more discerning than in tired America. Case in point: Ennio Morricone’s magnificently languid soundtrack for the film VERUSCHKA is displayed totem-like in Dachboden…as it should be. 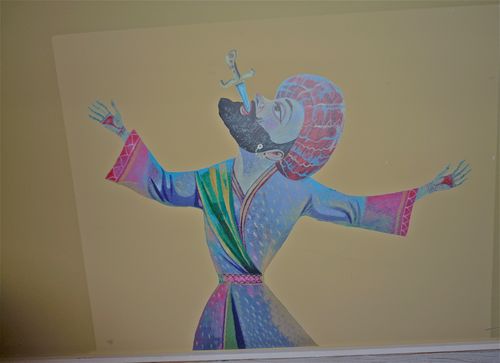 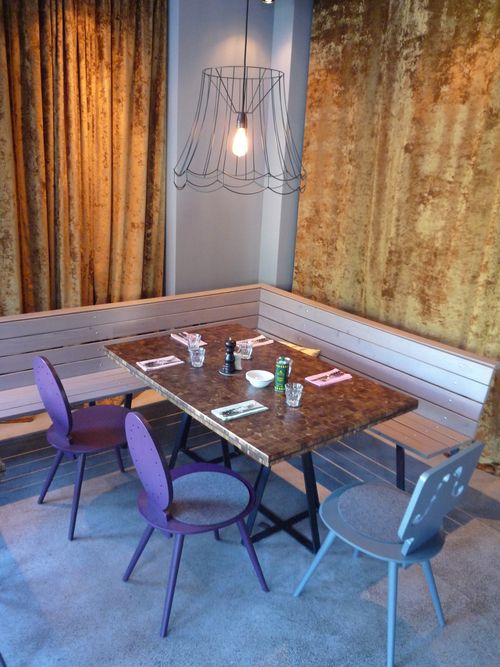 The spacious and airy restaurant at 25hours, 1500 FOODMAKERS, has a great look, if you love ecleticism (as I often do). The pizza is so good, you’ll almost forgive the restaurant’s ill-advised official slogan, “Fuck it, eat pizza.” 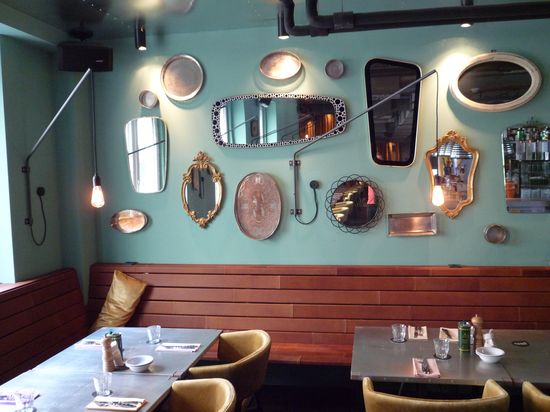 The hotel at night….I probably took this photo when I was returning from one of my wurst and/or Kaiserbr