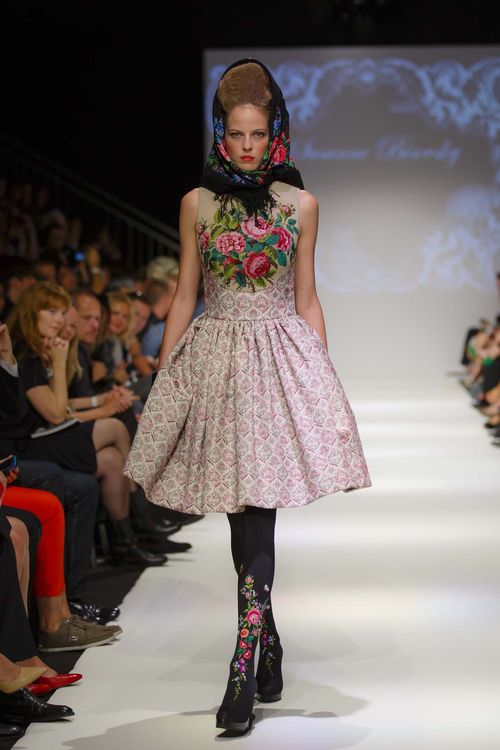 MQ Vienna Fashion Week, held every September in the city’s impressive Museum Quartier, had a rather grand kick-off last week with a kaleidoscopic catwalk show by mysterious Austrian couturier Susanne Bisovsky. Bisovsky is a peerless player in the European fashion scene. She’s somewhat of a recluse, she doesn’t advertise and she completely ignores the sadistic mandate that demands designers to produce between 4 and 8 collections every year on a backbreaking schedule. Bisovsky stages runway shows sporadically, so this was a rare treat indeed to experience these extraordinary garments up close.

The show was a mix of haute couture and pret-a-porter–the latter which is sold in a few shops in Austria and a smattering of boutiques in other European locales. The couture pieces become immediately archival (they’re never for sale) as the fabrics, often intricately embroidered and vintage, are culled from flea markets and eBay or arrive at her salon from globe-trotting friends.

Carole Pope and I visited Susanne and her partner Joseph at their salon, so more on that in an upcoming post. For now, enjoy the shots from this crowd-pleasing show. 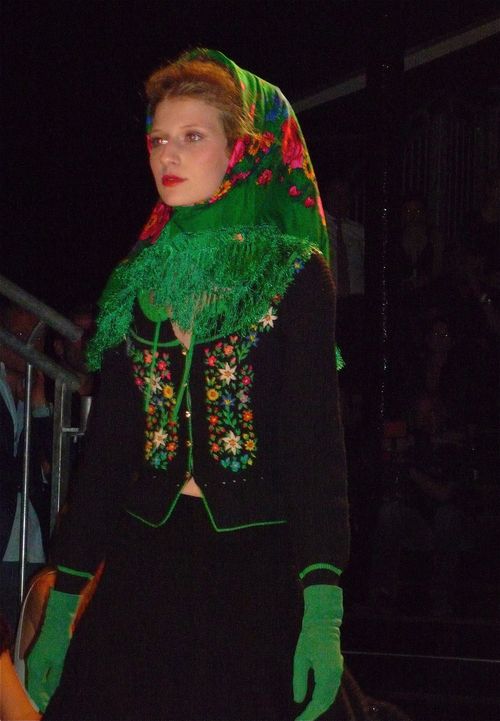 I really love the Russian nesting doll influences but there is also always something unmistabably Austrian about Bisovsky’s designs. Her mesmerizing mix also includes references from Latin America (particularly Mexico) and the scope of Western and Eastern European history. 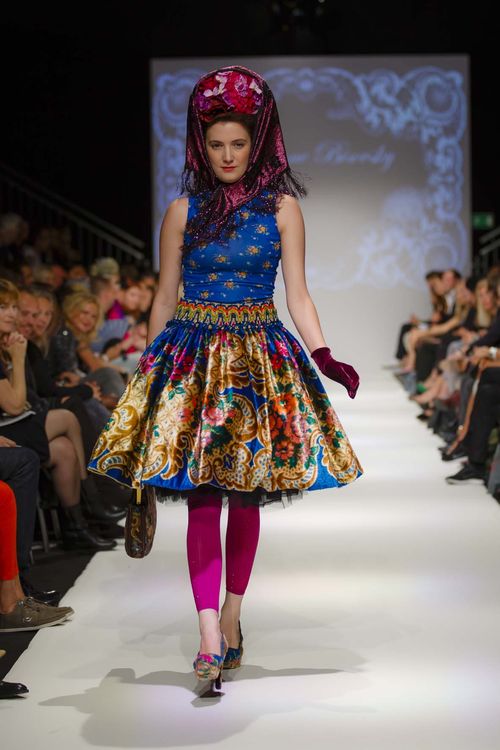 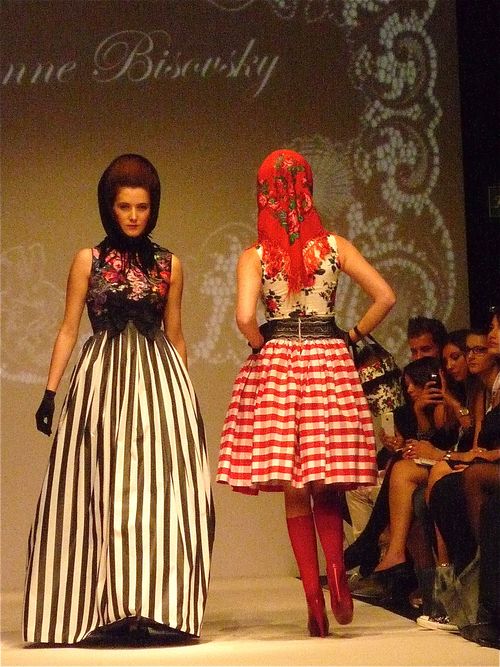 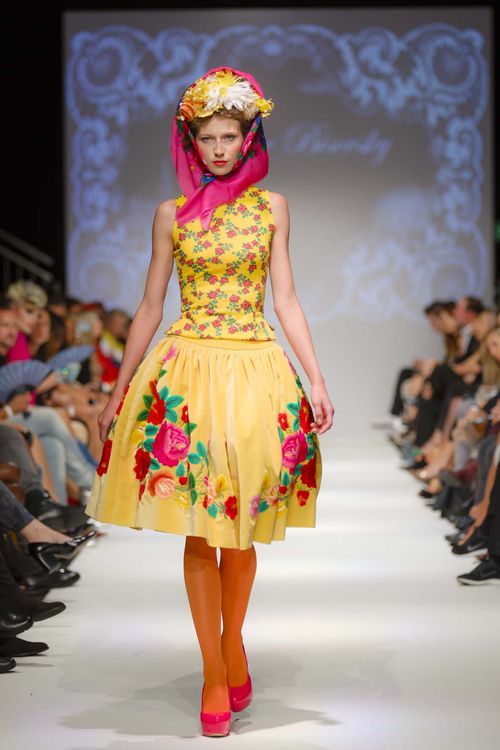 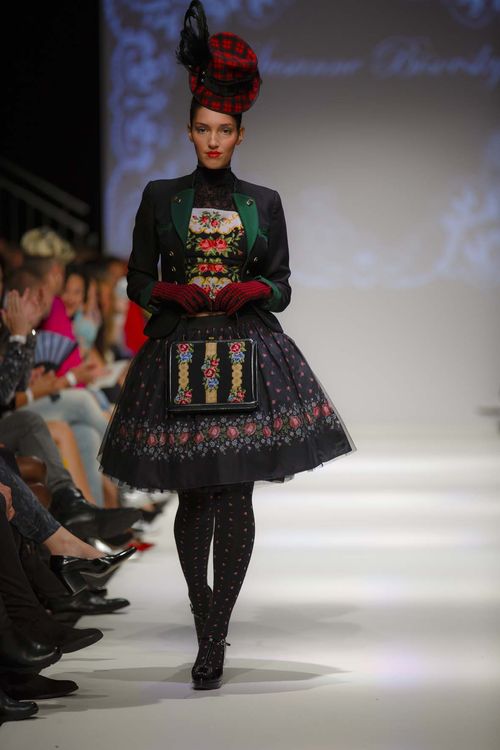 I need this for my next Alpine jaunt. 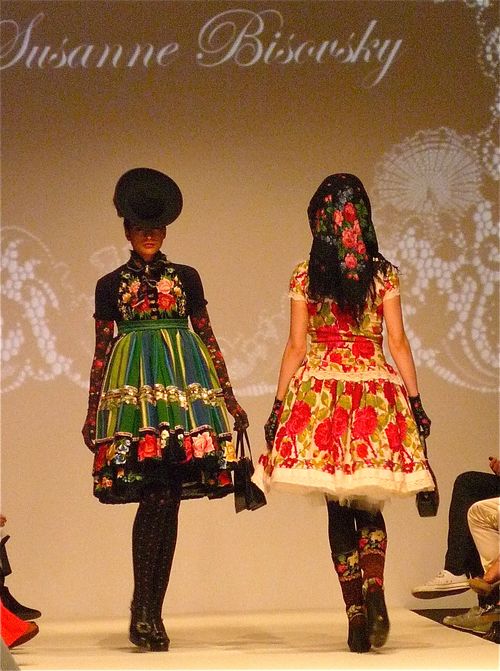 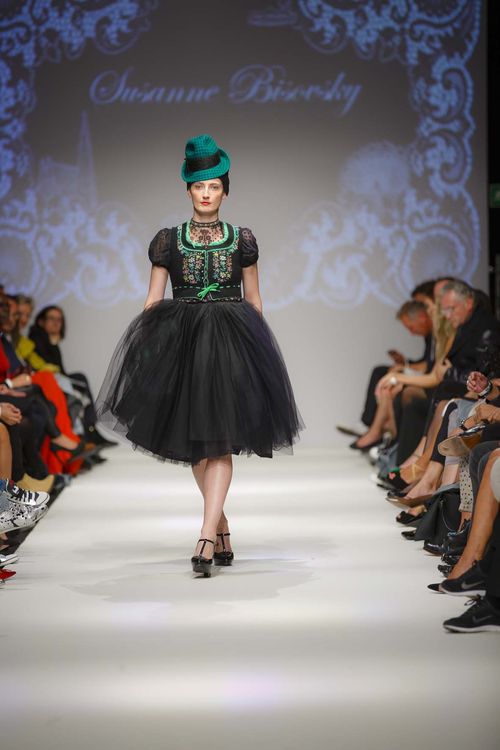 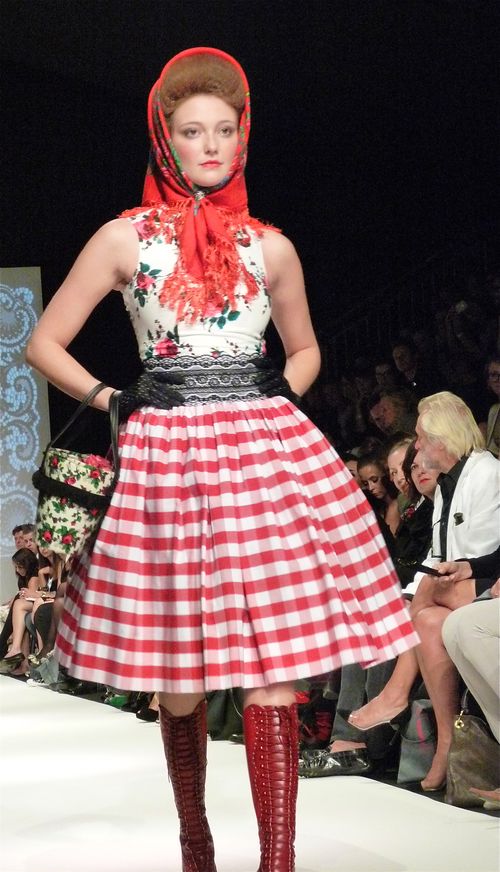 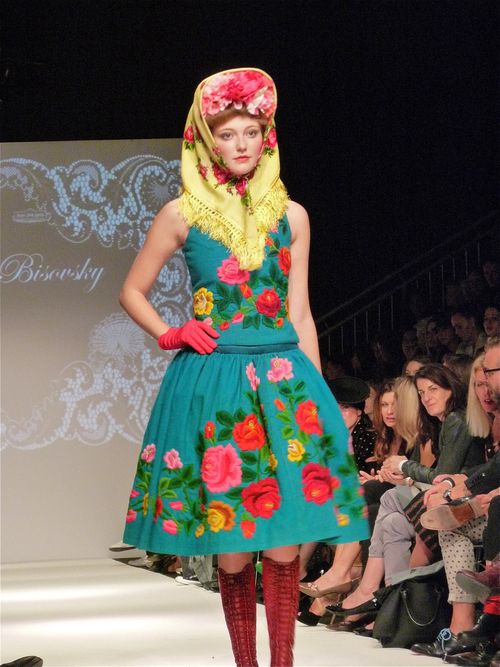 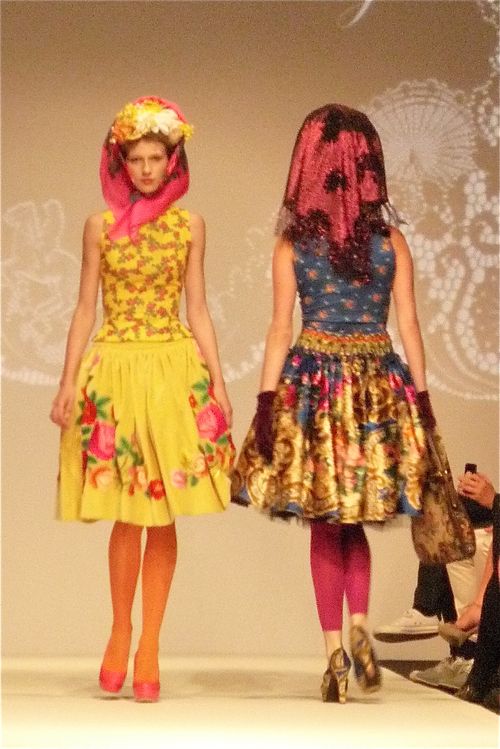 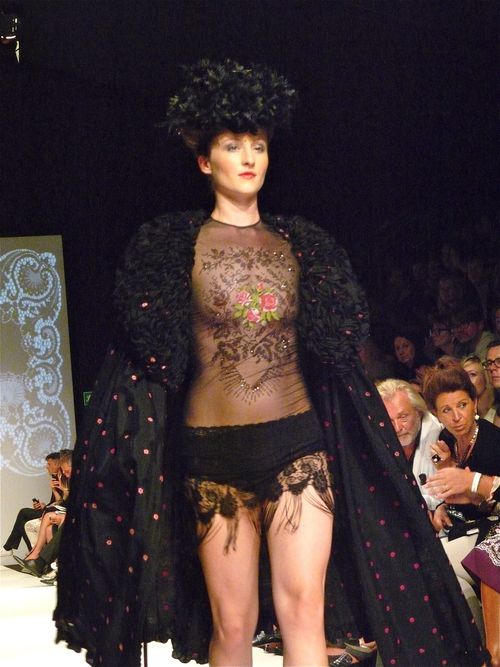 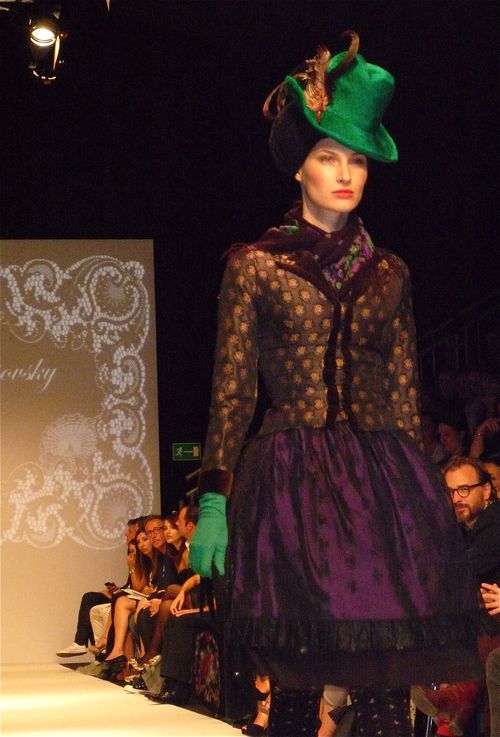 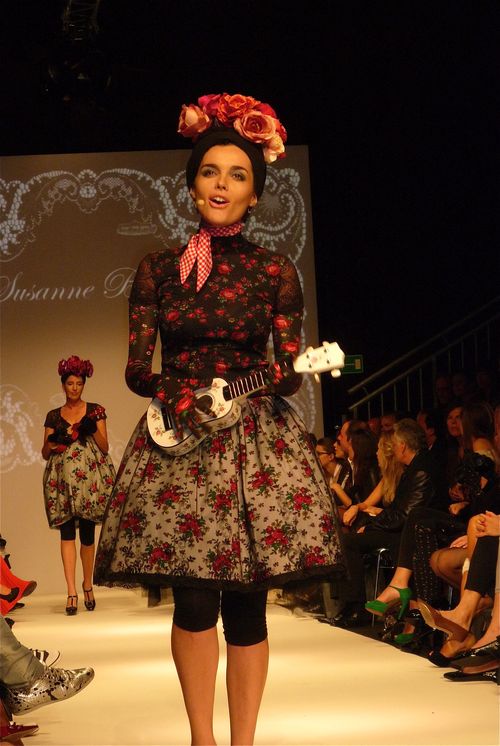 The show’s romantic finale was truly marvelous. The girls from the band Ganes sang and played ukeleles (which seem to be a trend, as Asia Argento sported one during Alta Roma in July). They sang in Ladin, a language which is basically half-Italian half-Raetoromanic. It’s spoken mainly in the Dolomite Mountains in Northern Italy in South Tyrol, the Trentino and the province of Belluno. It’s closely related to Swiss Romansh and Friulian. This was all news to me and I am delighted to know about it. The song was absolutely enchanting. 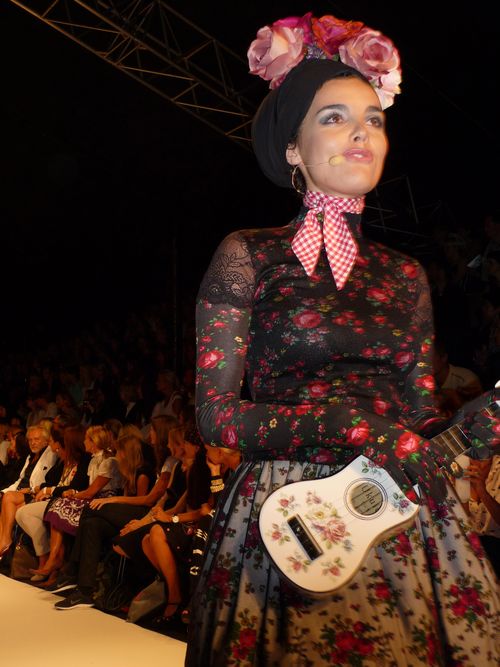 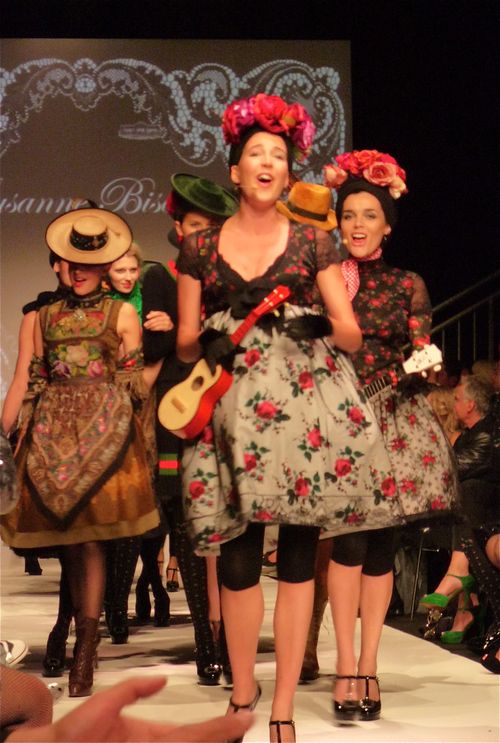 Here’s the video of Ganes’ performance. I hope you can hear the singing, it’s so lovely: 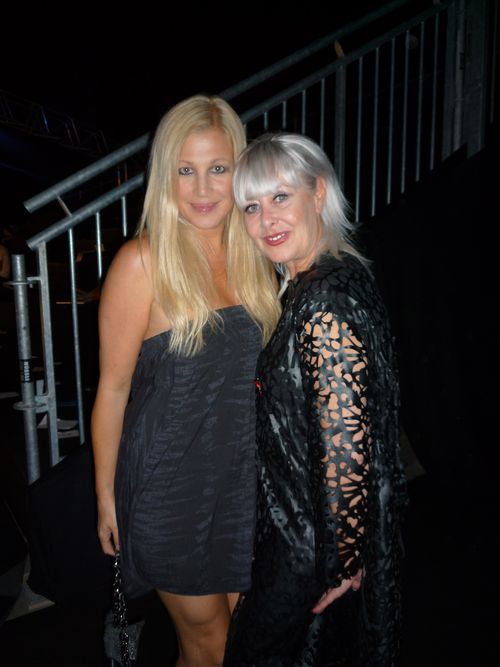 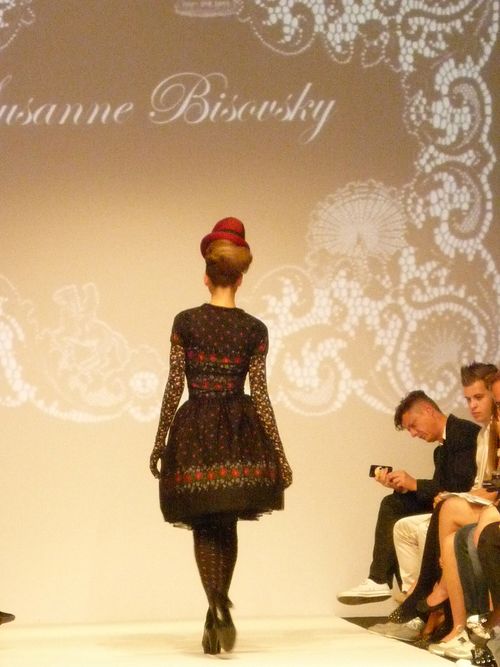