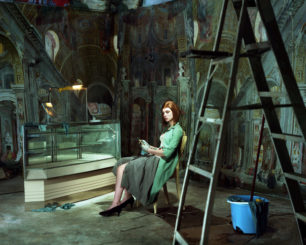 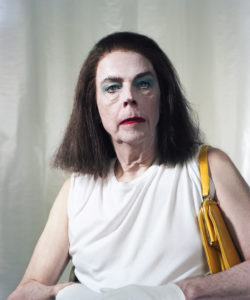 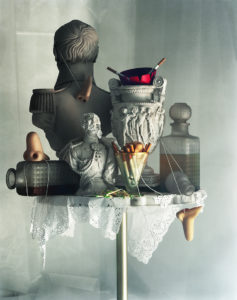 Palazzo delle Esposizioni will host American photographer Jeff Bark’s “Paradise Garage” from the 7th of June to the 28th of July. The body of work found in this opening exhibition is comprised of over fifty never before seen pieces dedicated to the Eternal City.

Curated by Alessio de’Navasques, the exhibition has been envisioned and structured in a way that purposely allows no room for boundaries between art and viewer. It is a path to be walked together, one that leads into a vision free from reality’s constraints, into a world that was born and lives solely within the artist’s eyes. Each image is but a fraction of a moment the photographer has suspended in his memory, a material manifestation of his private narrative.

His garage in Upstate New York, a once plain, blank walled space, has been transformed into the unlikely home of enigmatic scenes created through the merging of exquisite details and iconographic references to the art of the past.

Displayed at the Palazzo delle Esposizioni, the photographs of Bark’s garage sets become surreal landscapes, inhabited at times by nostalgic vignettes, and at others by imposing and monumental portraits, reminiscent of the allure and scale of the large painting collections found in Roman palazzi.

Interiors, still lives, natural landscapes and cabinets of curiosity are only a few of the recurring genres found throughout the space that aid in the merging and mixing of what we know as truth, and what we know as absurd. These familiar genres lull the viewer into a false sense of security which twists as one is pulled into the universe of the images. ‘Paradise Garage’ is a game of perspectives and opposites, one where details are magnified and our understanding of them is forcibly questioned; it is a challenge to re-envision, and re-evaluate, temporal norms.

Jeff Bark’s project originated two years ago: a brief visit to the Italian capital inspired him to recreate, in a space found somewhere within the abstract realm and that of reality, a Grand Tour in the Bel Paese. His vision grants seemingly insignificant objects a sense of poetry and meaning; souvenirs found in American flea markets become the catalyst for grandiose compositions and solemn portraits, images that end up representing – symbolically and allegorically – the nuances of human nature. The careful use of lighting, along with the richness, the ambiguity with which every detail is nurtured, render it all unexpected and uncertain: it is a still stolen from a reel we shall never see, from which we do not know a beginning, and will never know an end.

The authenticity and ambiguity, the sensual beauty, the lights and shadows found throughout Bark’s work are all but coordinates of a trip across Italy that is unbound by a specific timeline or frame; it is one that evokes artistic moments found in the Renaissance, the Baroque, and the phenomenal works of Fellini and Visconti.

The limited space found within his garage has allowed Bark to discover an approach that is both meticulous and cinematic, one that resembles more the creation of a painting rather than the assembly of inspirations. It is an approach that represents his many fragments, and that holds tightly within itself the influences of European, Italian and Flemish art.

Jeff Bark was born in Minnesota in 1963 and lives and works in New York. His work is in American and International Collections such as:North Carolina Museum of Art, the Wilson Center of Photography, the Sir Elton John Collection and the 21st Century Museum.

His most recent participation was at the “No Fashion, Please!” collective exhibition, curated by Kunsthalle of Vienna, along with photographers Philip-Lorca diCorcia, Erwin Olaf, Hanna Putz, Viviane Sassen, Sophia Wallace and Bruce Weber. He is known worldwide for his iconic editorials and magazine covers, specifically for Dazed & Confused, Another magazine, I-D, V Magazine, Pop Magazine and Dust.

Jeff Bark’s monumental photographs tell of the human, collective experiences in ways that evoke one of history’s great painters, Jacques-Louis David, while always remaining true to still-life traditions found within Italian baroque paintings. These combinations serve him in many ways, the most tangible as a means to explore the complexity and nuances of his own personality.

The American photographer is known for his sensual aesthetics and for his technical mastery, which combined allow his photography to transform into a truly unique, and singular art. His dreamlike tapestries thread the blank walls of his studios. Each element is either consciously picked, or meticulously created by Bark and evoke surreal and suspended atmospheres that seem to be found within the midst of a fantastic tale.