Just off of a plane from Stockholm, Wednesday night, I dashed over to Henrik Vibskov's Shrink Wrap Spectacular on the back lot of the Carlsberg factory site in central Copenhagen. As always, Mr. Vibskov did not disappoint, installing a series of drums that when the model walks down the teeter-totter like catwalk the post hits the drums. 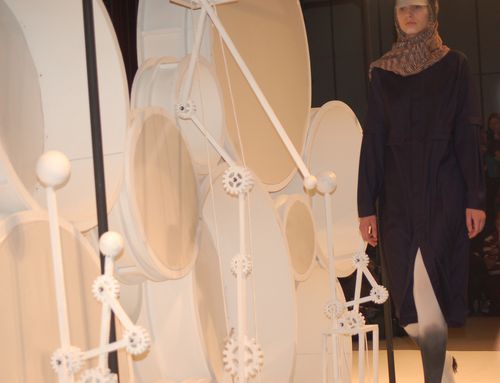 The designer who debuts his collection in Paris during men's week gave us our first look at his womenswear. Keeping a surprisingly neutral palette, for fall, he then livens things up with his famous colored prints, zippers and a stand-out built-in nomadic backpack /jacket. In a world were everyone wants to be the same, to meet a bottom-line, it is the creative people like Henrik who makes me love what I do.

After a quick stint at the Acne store opening and party, where the MC got completely naked during his performance, I called it a night only to pick right back up the next morning for the TEKO graduate show. Considering the amount of academic juries I sit on, I NEVER miss a school presentation. This year, ten students presented 3-6 pieces. For me the two stand-outs were Trine Engelbretsen and Eva-Maria Suviste: Engelbretsen beautiful strips of leather highlighting the female form was advanced and did not feel heavy & for Suvite she shows early promise for cut and prints.

(forgive these pictures, it was early and my settings were off) 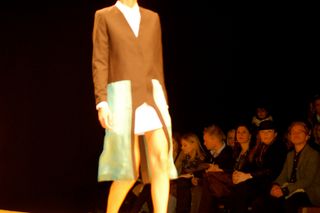 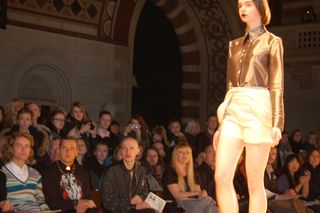 Next on the agenda was menswear designer Jean // Phillip – who I have been following for several years. The designer who often works in all shades of black and has a heavy propensity towards the drape infuse a bit (yes just a bit) of ice blue this season. A definate must-have was a black shearling coat with amber shoulder details. 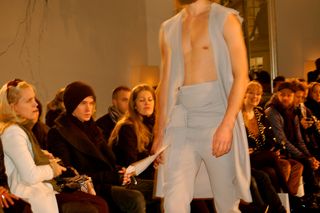 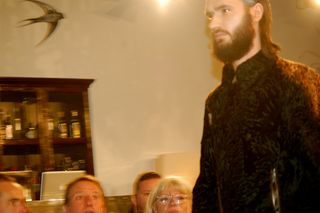 Anne Sofie Madsen has quickly become the new name in Danish fashion and it comes as no surprise that the designer worked for Mr. McQueen in London. The designer offered a broad range of looks that span golden sparkle to white tribal activewear all the way to beautifully printed dresses and skirts with laborious fringe work. 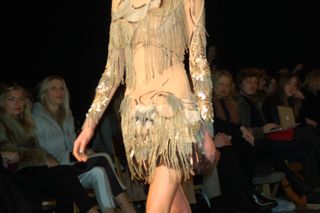 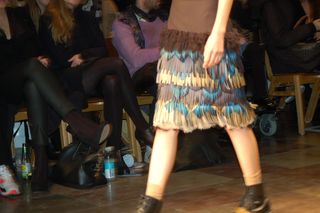 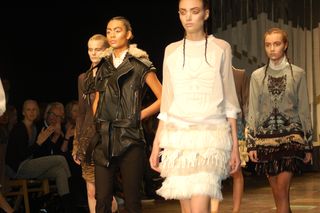 To close out my first 24 hours in Copenhagen was the Los Angeles / Copenhagen based designer Sara Sachs, who along with a collective of artists, performers and filmmakers make-up Moonspoon Saloon. Despite the fact that it was -15 degrees more than 100 people stood outside to watch a preview of the forthcoming collection that will fully debut during New York Fashion Week. Sachs dressed in one of her multi-colored furs seemed to warm up the venue with her smile (and hot toddies) and nearly every passerby was in awe of this very special moment that MSS created. 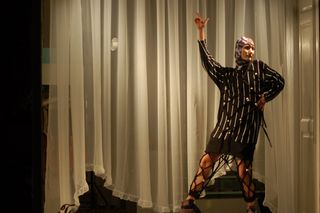 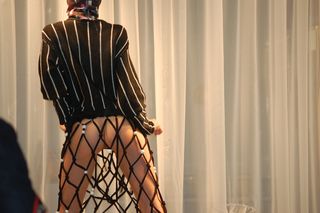 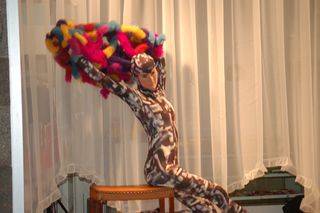 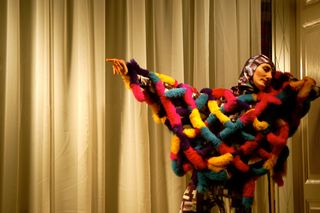 For full show reviews check out my column on Vogue.IT