Joseph Quartana tells it like it is. The owner and fashion director of SEVEN in New York has been honing his progressive and independent take on designer clothing for more than a decade now. Despite being sharply dressed -and favouring black on all occasions- Quartana is a warm and engaging man. He could easily be the life of the party, whether you see him in Seoul, Paris or Amsterdam. I value his honesty, and the fact that he doesn't try to dress things up to make them prettier. He happens to be a great DJ, too.

We sat down for a chat in Brussels last June. In many ways, Joseph is your typical New-Yorker: he talks fast, does not babble and goes straight to the point, with that hint of Manhattan flair we all love. What comes across is his positive attitude, which has made SEVEN a hot spot amongst fashionistas and celebrities worldwide. With Six Scents Parfums -his most recent project- Quartana has been enjoying a different kind of success, dealing with a much more intimate and lasting form of expression: fragrance.

You've done so much travelling lately, haven't you?

Yes, I was only in New York 3 days for the past 5 weeks. I have a consulting job for Lotte in Korea and was hired to curate a menswear shop-in-shop for them. They are the oldest department store in the country and currently renovating their locations. It's about revamping their image, too.

Are you going to bring some edge to their selection?

As much as I can get away with. They appreciate classic menswear, but also want to get the hottest and newest brands. I was surprised sometimes, because I took them to the Henrik Vibskov showroom, thinking they would find the collection weird, but they loved it and ended up doubling the order. I had meetings with the fashion division in Seoul and they are really open-minded about things. They're giving me freedom, too, which is really great.

Yes. I'm actually the first foreigner to consult for their fashion division. It's very flattering.

I guess mentalities are changing, aren't they?

Totally. It's all changing now. My wife is Korean and we met 17 years ago. At that time, it was taboo for a Korean woman to have a foreign boyfriend. My wife moved to New York to study at Parsons and I remember going to Korean restaurants with her. The waiters would pour hot tea on my lap, things like that… It's all different now, especially when it comes to foreigners and being more open-minded.

I guess fashion is thriving in Seoul and there's a hunger for new designers there. Is New York still in a recession?

Yes, it is. It's not gotten worse, but it still isn't any better. When the bank crisis happened in 2008, everything crashed immediately. It may have gone up a little bit, but it really sucks, to be honest. With my shop for example, not only do we have the recession to deal with, but also these scaffoldings in front of our location. One has been there for 3 years now and it turned into a lawsuit. My shop is basically in a construction zone, you can't even see it. The interns that worked for me for 6 months could not even find it. 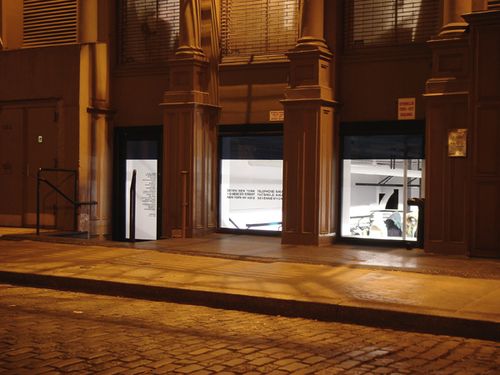 It is. I get all this feedback from people who want to shop at SEVEN, but can't even locate the store. I sat down and calculated how much this is costing me daily in lost sales. It's about 1500 dollars a day. Over a 3-year period, that loss amounts to 850.000 dollars. It's insane.

What do you think has changed since you opened the store in 2000, besides the recession itself?

The problem we have at the moment is that a lot of people in the fashion industry don't have any work. Up until 2008, we had a lot of stylists, freelance writers, designers and models. It wasn't just fashion, but also graphic design, music and the art world. Suddenly, there's no money in any of these industries. So many people I know are unemployed, and if they get work, it's just enough to pay the rent. People owe them money that they are still waiting for.

That affects spending, obviously. SEVEN has stayed strong because of our selection. We've had a lot of celebrity patronage, like the Black Eyed Peas, Estelle, Jay-Z, Kanye West, Mary J. Blige or Bj