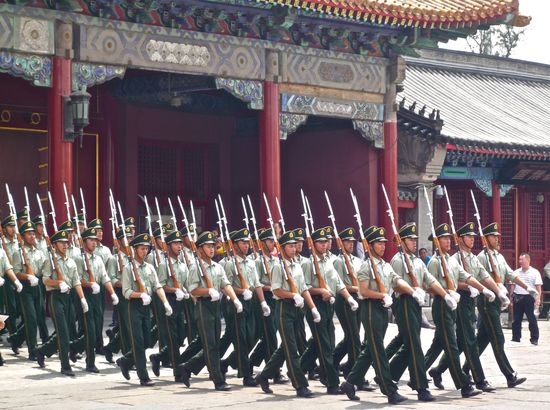 Last month I was in Beijing visiting friends and since it was my first trip to China’s capital, I made sure to visit as many of their wonder-of-the-world sites as possible  and of course a trip to infamous Tiananmen Square was mandatory. 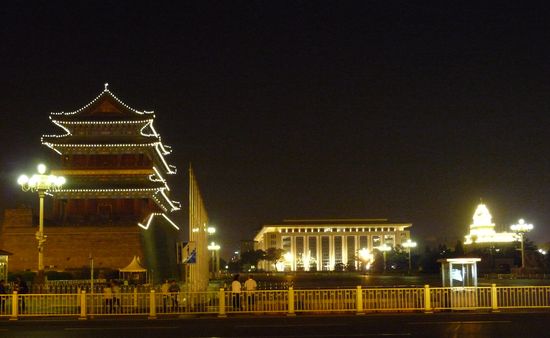 I first tried to visit Tiananmen Square at night because I wanted to wander around and take photos. I know that it used to be open to the public at night because I’ve seen photos of people strolling around the lit-up buildings. Well, this photo was about as close as I could get because they now close the square at night–undoubtedly because of all the government’s anxiety over the so-called Jasmine Revolution. I couldn’t believe how difficult it was to get near the square–there are white fences everywhere and you have to schlep through several underpasses to get to it.

When it’s open during the day, all visitors are filtered through a tiny guard house where you have to walk through a metal detector and put your bag through an x-ray machine before you can enter the vast square. But that’s nothing–every subway entrance in Beijing has a guard post with x-ray machines for your bags. They are not talking any chances there, let me tell you. 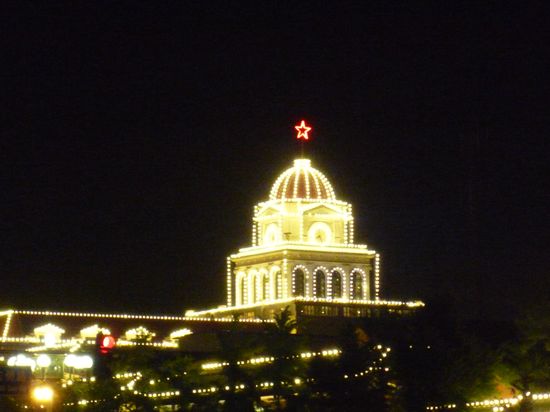 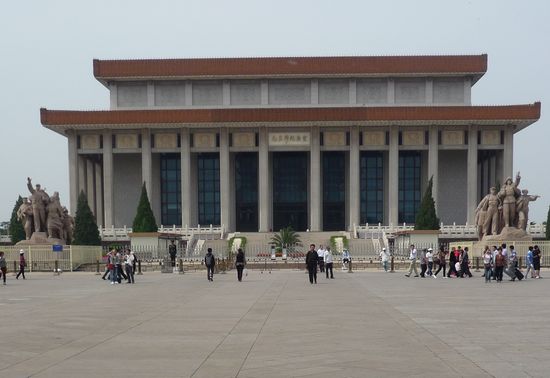 At the south end of Tiananmen Square is the Chairman Mao Zedong Memorial Hall, or Mao’s Tomb, where Mao Zedong’s embalmed body has been displayed since shortly after his death in 1976. Of course I waited in the long line to pay a visit and was a little surprised that I was the only foreigner among thousands. Everyone else was Chinese; mainly visitors from the countryside who came to pay their respects to the Great Helmsman.

Of course no photos are allowed inside–and you have to check your bag across the street before you enter–but my memory of the Memorial is forever burned in my retinas. (Bear in mind, I have a separate room in my apartment designated as “The Mao Room” which is a popular gathering point at my cocktail parties).

When you enter there is a HUGE white porcelain statue of Mao seated on a chair with a mammoth mural behind him depicting a vast stretch of ocean and islands painted in a dizzying and intimidating persepctive, making it seem like Mao is the ruler of Earth. I found it very interesting that the statue shows Mao with his legs crossed. This is no accident as body language and gesture are extremely significant in Chinese culture. My guess is that the Party members who commissioned the statue wanted to show Mao in a casual, friendly seated position so that the Chinese of now and generations to come will view him as a beneficent figure, like a kind father or uncle, not a stern ruler.

The statue is surrounded by wide rows of green plants (I’m pretty sure they were alive and not plastic) and then there is a mountain of yellow chrysanthemums in front of him, which visitors can purchase outside to lay in homage to Mao. I saw young Chinese bowing dramatically before the statue, much the way worshippers pay tribute in Buddhist and Taoist temples. A few older people were crying.

Then you’re quickly shuttled through the room where Mao’s embalmed body lies (alleged, as some people believe that it is now fashioned out of wax due to the failure of the Soviet embalming process) inside a large glass vitrine. I was extremely startled to see his face glowing like a plastic Halloween pumpkin–not to be disrespectful, but it was a very strange, unearthly sight. It looked like he was lit from within but I think there must have been a light shining on his face which, admittedly, looked very waxy. His body is draped with a blanket bearing a large Communist hammer and sickle motif. We weren’t allowed to linger and before I knew it, I was back outside in the dusty, polluted air. 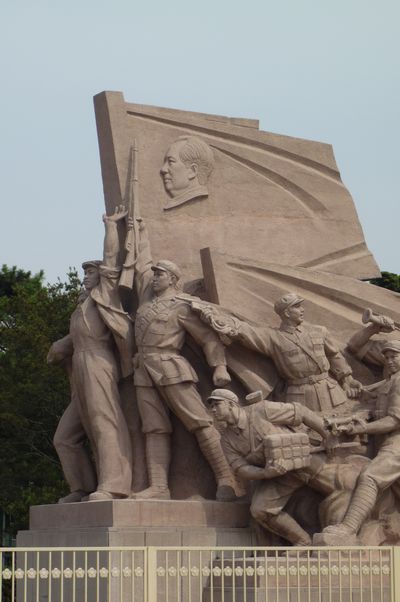 The heroic statues outside of Mao’s Tomb 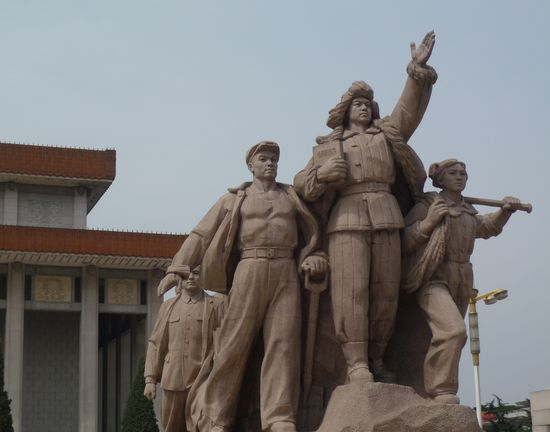 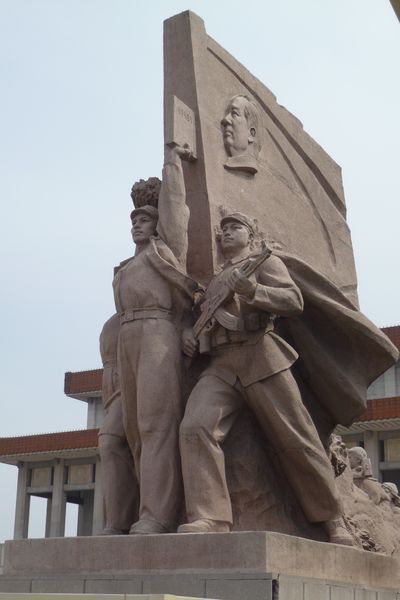 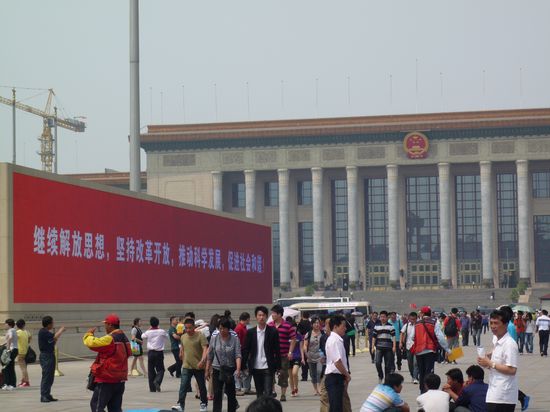 I was fascinated by the two gigantic flat-screen monitors displayed in concrete in the middle of Tiananmen Square. They were erected in 2009 for the 60th anniversary of the founding of The People’s Republic of China (the ceremony for that, by the way, cost more than the 2008 Olympics opening ceremony!) The images on the screens are a curious selection of videos that are propagandistic (of course) but in a less heavy-handed way than in the past. I don’t read or speak Chinese so there’s a lot that I’m missing in these continual broadcasts. 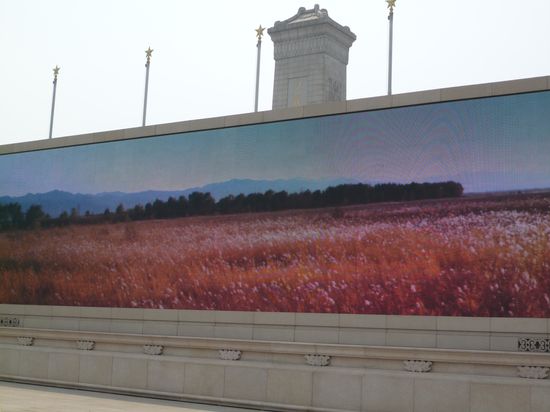 One of the videos featured long, lingering shots of fields of wheat….a rather classic image from the Socialist propaganda canon meant to convey prosperity and abundance–a result of the dedicated efforts of the Workers. 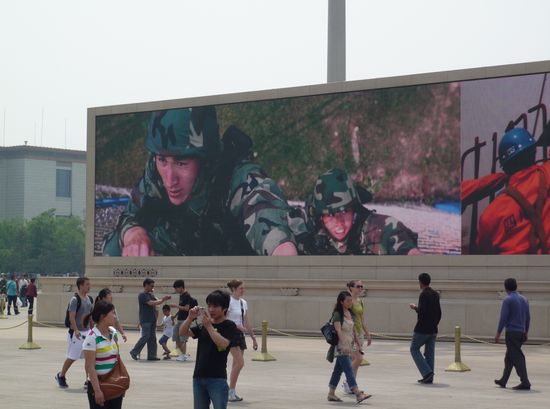 Other film ranged from footage of heroic soldiers… 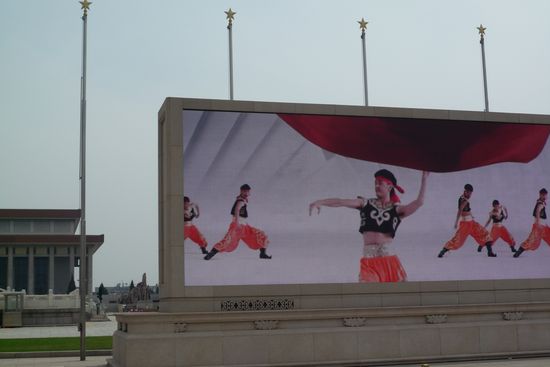 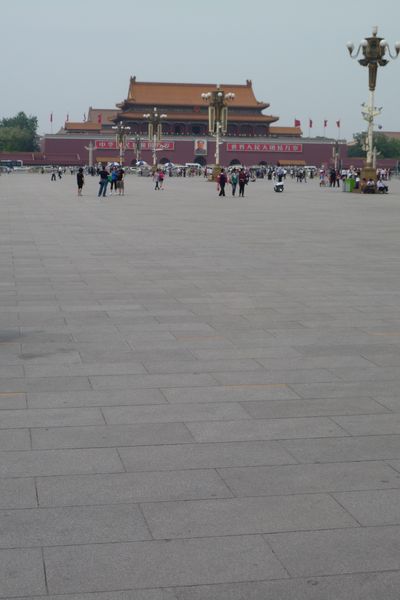 Tiananmen Square is the largest public square in the world, even bigger than Red Square in Moscow. Even when there are hundreds of people wandering around, like the day I was there, it can feel rather empty and vaguely alienating. I don’t love crowds so I found it very relaxing. Of course I had extremely outdated and unrealistic fantasies about my first visit to Tiananmen Square, fueled by my recent re-viewing of Michelangelo Antonioni’s 1972 documentary about China, “Chung Kuo Cina”:

In this clip from the film, there’s a surprising amount of traffic–cars, trucks, bicycles–passing through the square (which seemed bigger then because Mao’s Tomb didn’t exist yet–he was still alive) which is completely absent today. Of course the giant portraits of Marx, Engels, Lenin and Stalin are gone–much to my disappointment–but it’s rather fascinating to see them in this clip. 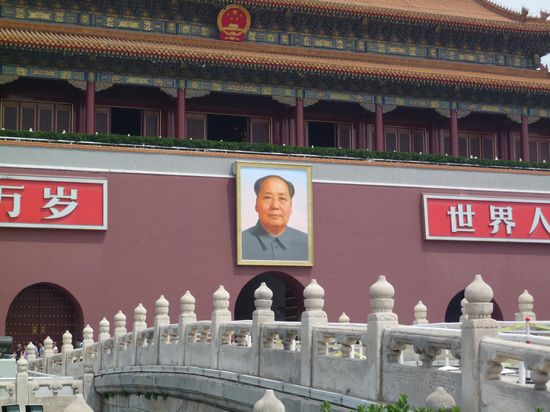 My obligatory photo of Mao’s portrait at the entrance to the Forbidden City. 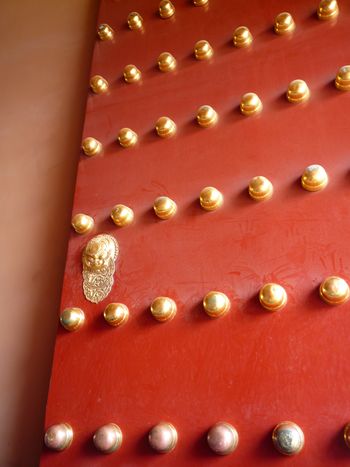 One of the gates to the Forbidden City….everyone was rubbing the knobs as they passed by, presumably for good luck. 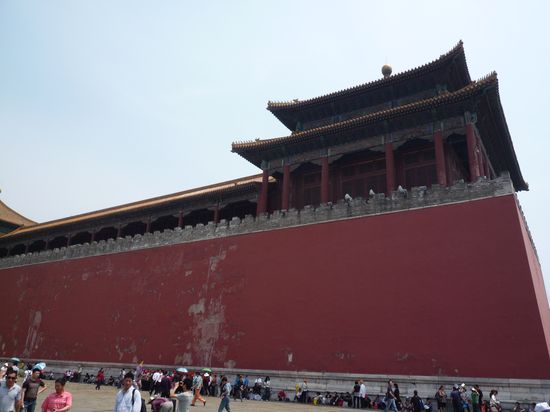 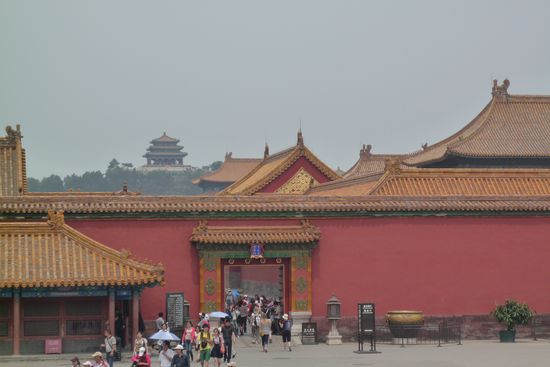 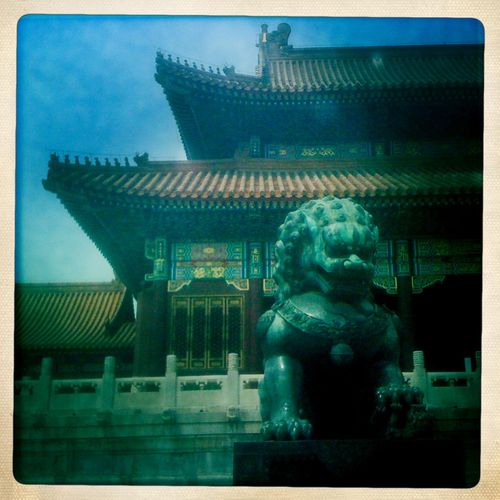 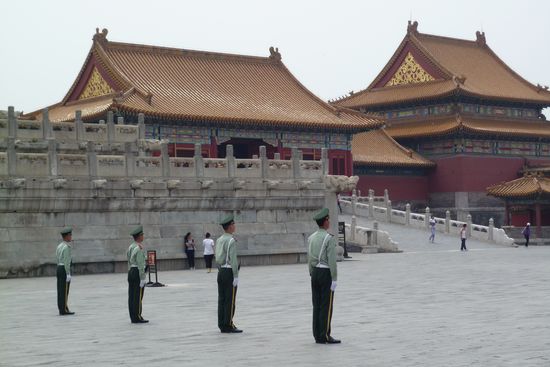 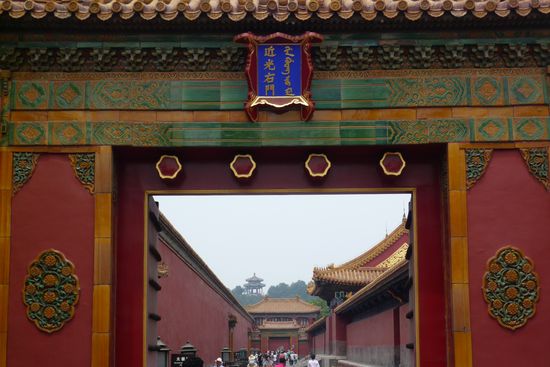 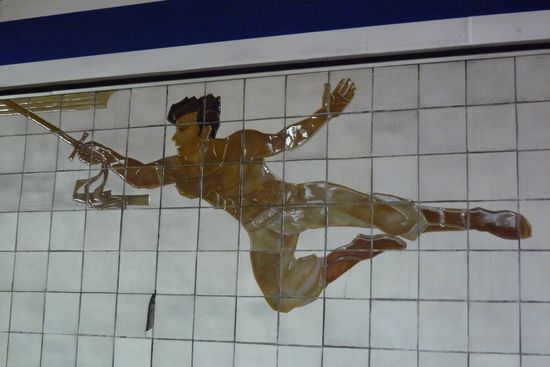 I always make it a point to use the subway system of every foreign city I visit, to get a sense of the infrastructure and the daily lives of average people. I’ve given up doing it as a way of comparing the subways of the world to the New York City system. There’s just no point, because NYC has the worst, the ugliest, the most inefficient system in the world (okay, yeah, yeah, because it’s the oldest). To make comparisons is just too depressing. Anyway, I really enjoyed the magical Kung Fu mosaics in one of the stations while I was on my way to a fancy Peking duck lunch on my last full day in the fascinating city of Beijing. 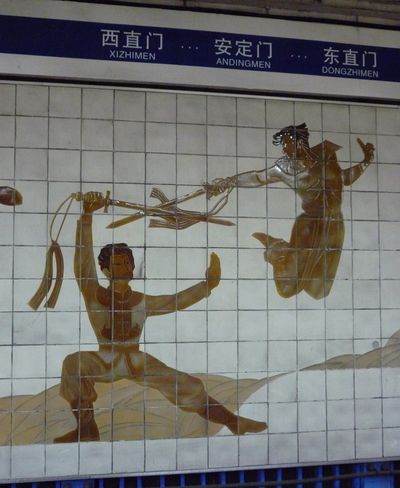 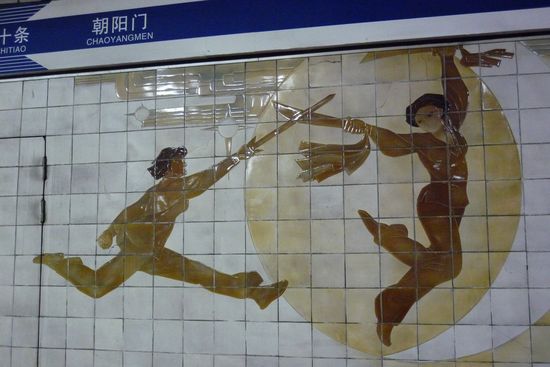 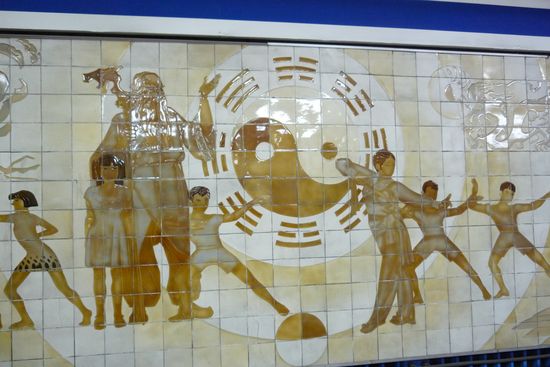 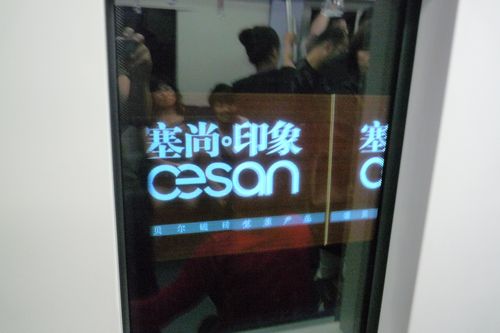 My jaw dropped when I saw how relentless advertising is in the Beijing subway. It’s so in-your-face, it makes America look Communist in comparison. Not only are there TV monitors all over the cars playing commercials (but also other things–we’ll get to that in a moment) but the wall of the tunnels inbetween some of the stations are paved with a succession of dozens of video screens so that commercials can be viewed through the cars’ windows as the subway is speeding along at breakneck speed. China has really changed since I was last there in 2003. 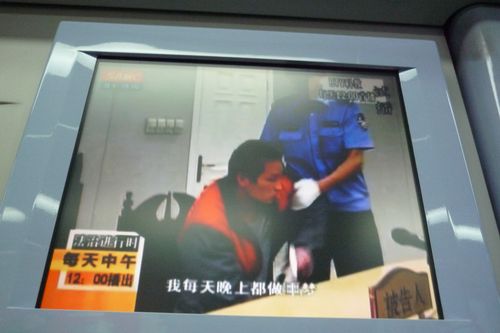 Not all of the videos shown on the monitors on the subway cars are commercials. One minute you’ll be watching sunny ads starring pretty young woman hawking a new moisturizer or a food product or even an ad for GLEE (yep, they broadcast GLEE in China) and next you’ll be watching a disturbing public service announcement about….well, I’m not sure what they’re about but they involved a lot of police brutality (and no, it’s not a Chinese version of COPS). One video I saw featured footage of a kneeling, handcuffed woman being punched in the face by a police officer. I was a bit relieved when I noticed that I (the only Westerner in the car) was not the only person shocked by these videos. All around me wide-mouthed Chinese passengers were craning their heads to see the videos, gasping out loud in disbelief. It was very dystopian, to say the least. 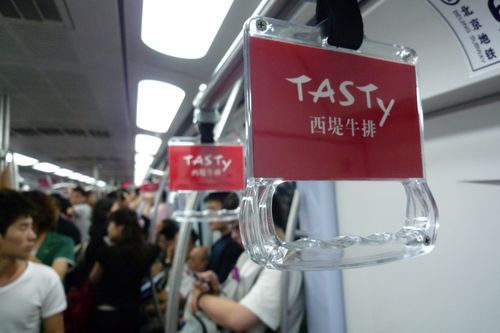 And then an uplifting moment (I love that there are even ads on the straps!!) to remind me of my mission that day: Peking duck! 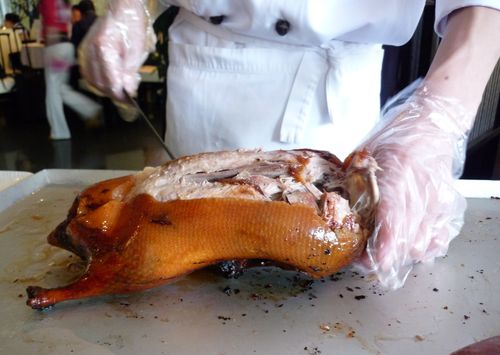 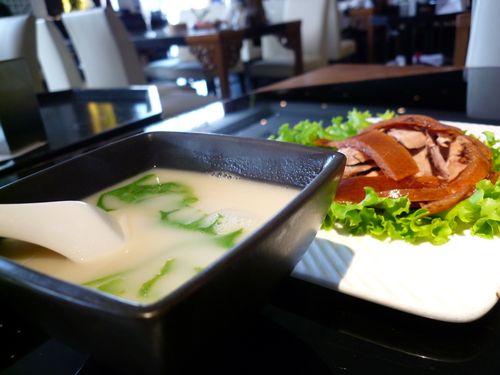 Previously on “Glenn Belverio in Beijing”:

Trespassing on the Great Wall of China