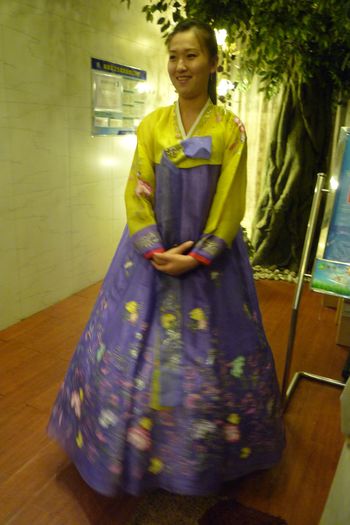 “Our Dear Leader welcomes you to Pyongyang Palace.”

I had a list of musts for Beijing (Great Wall, Peking duck, Mao’s Tomb, Forbidden City) and I’m happy to report I was able to tick off “North Korean dining” a few nights ago. I was taken to one of the North Korean government-owned restaurants (just up the street from the massive North Korean embassy which takes up an entire city block) by Jeffrey Ying and his friends. 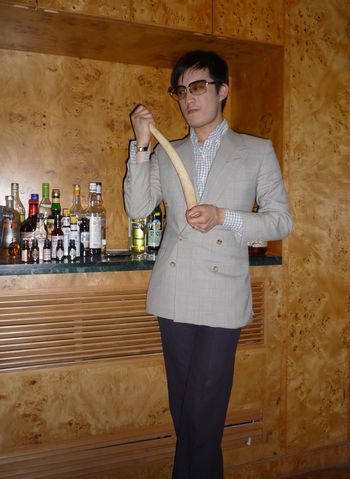 I had known Jeffrey Ying virtually from the Hintmag.com message boards since the early ’00s (his handle was “Incroyable”) so it was a pleasure to finally meet him in real life. Jeffrey lives in a glamorous penthouse in Beijing that’s festooned with mink duvets, rare liquors and exotic penis bones. Here he is at his bar proudly displaying his walrus penis bone. Jeffrey writes about design, fashion and culture for LifeStyle magazine.

He served me not one, but three of his special cocktails, each one featuring different kinds of alcohol that he had flown in from various corners of the world, from Chile to Brunei. One of his conspiracies involved some pisco (one of my favorites) and another, the Aviation, was a mix of gin, lemon juice, Maraschino and Creme de Violette. The third one was part of his “projects series” and contained chartreuse and, from what I can remember, a few shots of rattlesnake venom. I was so smashed after those three drinks that I had to be poured into a rickshaw in order to get to the North Korean restaurant. 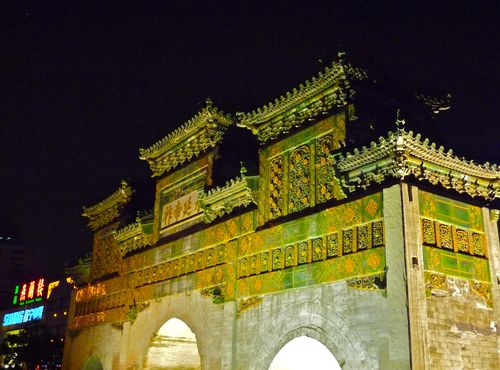 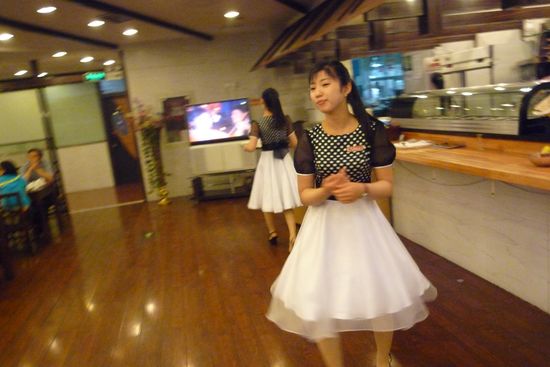 One of our doll-like waitresses at Pyongyang Palace restaurant. We chose to eat in the front dining room because the private rooms, which involved shows by singing North Korean showgirls, were way too expensive….however I did manage to get a few snaps of the performers. Taking photos is forbidden in the restaurant (we suspected that some of the girls working there are spies for Kim Jong Il) but I was so tipsy from Jeffrey’s cocktails that I just kept snapping away, despite repeated warnings. 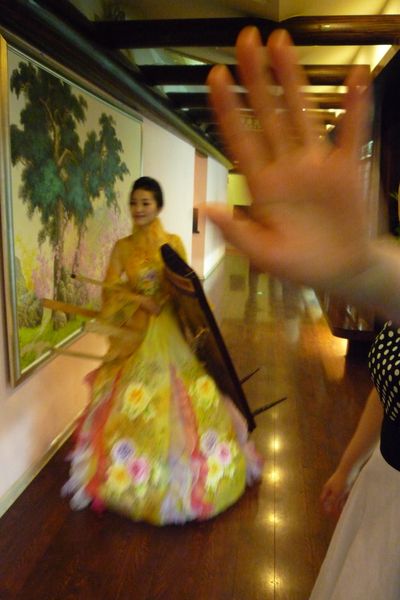 This photo makes me feel like the Ron Galella of Beijing. Here’s one of the hard-working showgirls carrying props to one of the private party rooms. 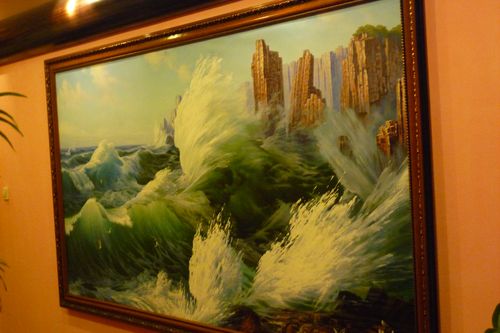 A North Korean painting depicting New York of the future being destroyed by a tsunami. 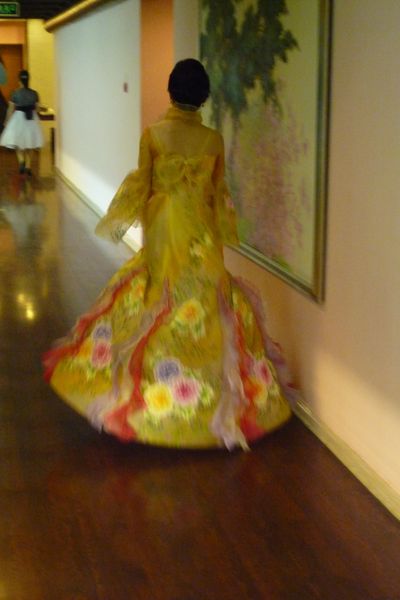 Jeffrey and I were reminded of John Galliano’s couture creations for Christian Dior (RIP) when we saw this lovely lady glide down the hallway. 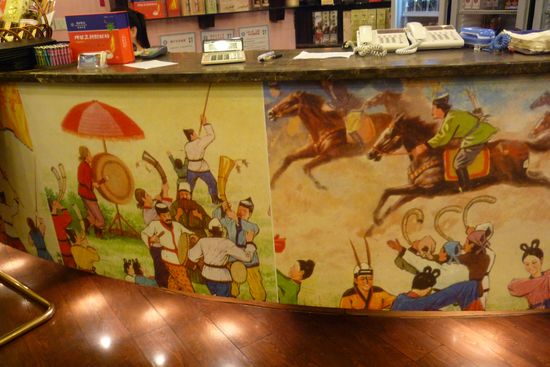 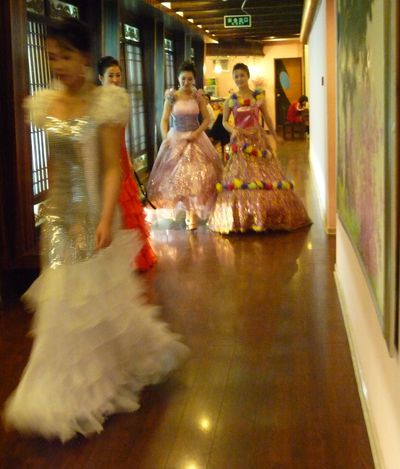 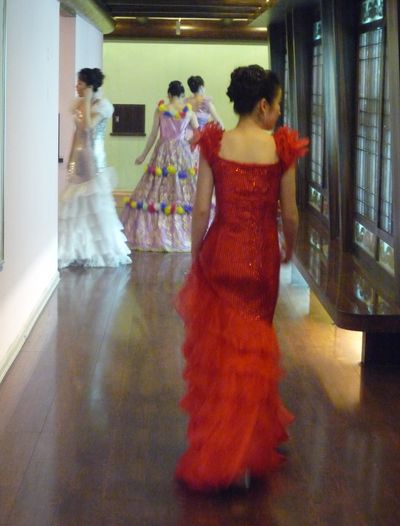 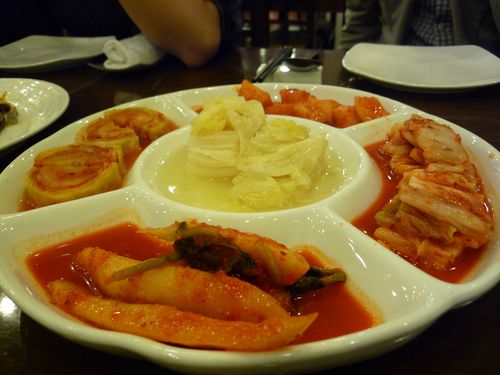 A plate of kimchi and other fermented delicacies. Tasty totalitarianism! 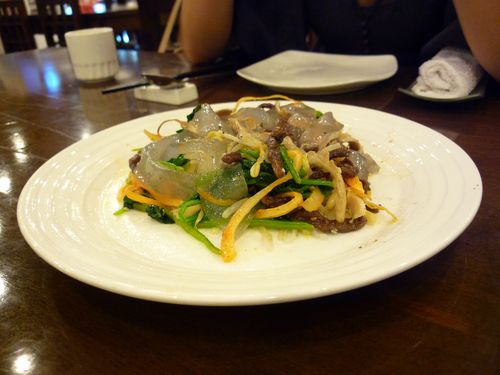 The Anti-Imperialist Gelatinous Noodles Stir Fry was a bit challenging. 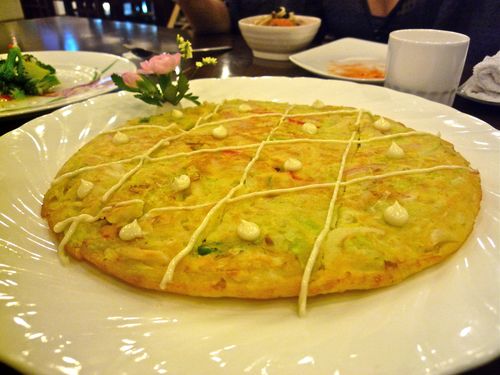 No, this is not North Korean pizza (it was some kind of eggy pancake…I think) but Kim Jong Il’s love for pizza is quite renowned. I believe he had several pizza chefs kidnapped from Italy a few years ago who prepare pies for him around the clock.