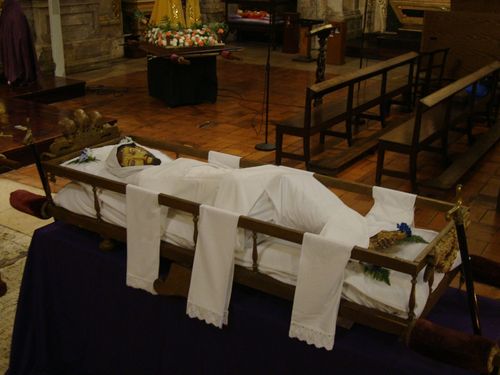 While spending some relaxation days in the city of Lisbon, it turned to be a very busy holy agenda following the local Easter calendar last weekend. The public enthusiasm was provocative enough for us to join all the sacred moments. My favorite-shared moment was the Church of Santa Catarina and its Easter Procession 2011. The building dates from 1647, and thought to had some reconstructions after the 1755 earthquake. It contains gilt work dating back to the late 17th century. I was hypnotized by its ceiling, a masterpiece from the 18th century replaced after the Lisbon disaster by the work of famous Italian plasterers working in London, including Toscanelli Giovanni Grossi. Considered one of the paradigms of baroque art in the first half of 18th century, it owns a vast textile collection of vestments and an unparalleled variety of gold pieces. Wealthy as its archives and very impressive is the main ship facing the altar. However, all enchantment the church delivers becomes almost theatrical when marching behind its saints and holy figures. It is almost a serious puppet-show instead of a religious procession: articulated wooden dolls dressed up for the occasion by followers, treated as living icons. The same procedure fashion demands: backstage, runway, lights including finale. Jesus left from Cal