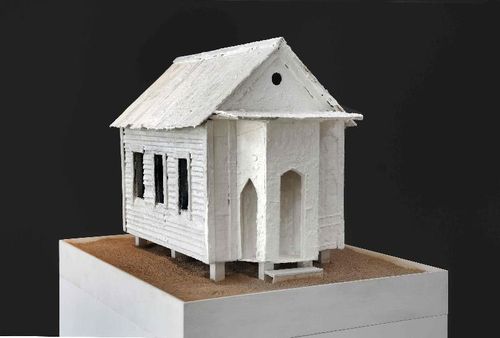 When William Christenberry moved to NYC in 1961 he held a series of odd jobs before having a conversation with the photographer Walker Evans who at that time was at Time-Life and was the one that inspired Christenberry to photograph his regional home. Evans and James Agee's 1941 book Let Us Now Praise Famous Men, featured images Evans had taken in Christenberry's own Hale County and had greatly influenced the younger artist. Their dialogue was the foundation for a life long friendship. Christenberry's interest in the themes and traditions of the American South translate into simple yet monumental iconography.

The exhibition at Marc Selwyn Fine Art consists of a central, isolated sculpture, Memory Form (Church), 2011 surrounded by the artist's signature grids of small format prints depicting architecture in the rural south. The artist's decaying structures become almost anthropomorphic as they poignantly explore the relationship between man and his environment.