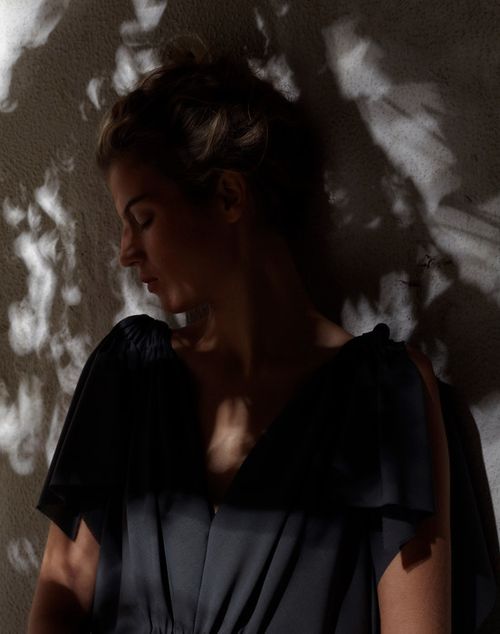 You don't often meet individuals in the fashion world who are talented, friendly, open and humble. David Szeto is one of them, and he grows on you the way his clothes do. His collections feature that rare blend of Couture elements and sportswear ease, mixing a European sensibility with the strength of American aesthetics. You will notice a woman wearing David Szeto, but the clothes won't get in the way. He has a knack for color, draping and beautiful prints, flattering many clients who keep coming back for more.

Szeto has dressed several celebrities in his career and his line is doing well, selling to some of the finest stores in the world. Still, don't expect him to brag about his achievements, he's far too critical for that. He may be demanding, but there's no time for ego tripping. David's personality is discreet, but he has a cheeky sense of humor. He's also a perfectionist and someone who will take his time to get things right. Recently, he launched his own website and stylish online store, featuring his newest creations, as well as a selection of archive pieces. I was, in fact, surprised to find out how long he's been in this business for when I first met him. He has a youthful charm and there is nothing jaded or bitter about him, even though he's clearly had to persevere to achieve his goal.

In this interview -illustrated with images from his last summer collection- he talks about beginnings, travels and who inspired him in fashion. I can only say that David's career is a tale of patience, determination and courage. He's not had it easy, but was never defeated and believed in himself. Now based in Brussels, he's starting a new chapter in his life and the energy coming out of his work is fun and contagious. 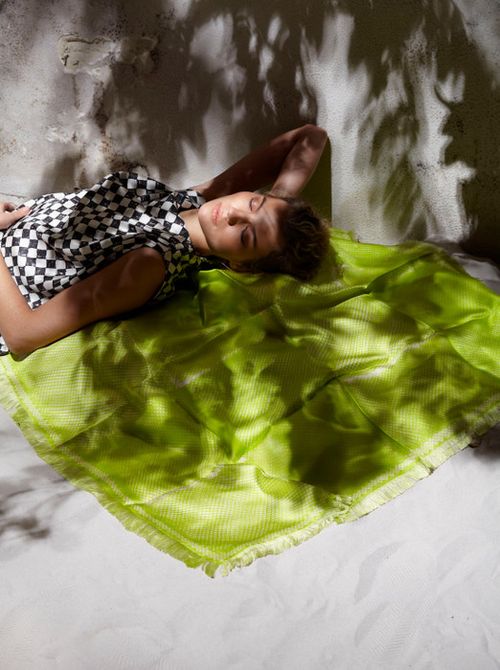 And when did you move to New York?

Well, I wanted to go as soon as I graduated from high school. I grew up in Vancouver and always wanted to do fashion. I remember seeing an article on Calvin Klein in a magazine, which made me feel like moving there. I studied at FIT.

Did you actually want to meet Calvin at that time?

No, not exactly. I remember checking out Parson's, too, but, in the end, my heart was with FIT. It was fantastic studying there and being in New York was also part of the experience. It was a very technical school and I felt that I learned everything I needed to know.

Did you start designing straight after school then?

I spent six months working after school and saved some money, because I wanted to go to Paris. That was my plan. I moved to France in 87 or 88.

And did you live there for twenty years then?

No, I didn't. When I moved to Paris, I wasn't actually sure what I was going to do workwise and ended up living in London for five years.

What happened was that I stayed in Paris for about a month and went to visit friends from New York who were living in London at that time. A friend offered me an apartment and I ended up staying there.

Nice. And what did you do in London?

Well, not that much. I made curtains, whatever.

Did having supportive friends help?

I guess it did. No, seriously, I decided to try and launch my own collection. The first one came out in 1989. It was under my name, but I think I was still in a fashion school frame of mind when I started it. I thought I would do the collection first, have a show and then sell it, but it didn't really happen like that. I made some clothes and went to Paris for a show. Thinking back now, I realize I had no idea what I was doing. I didn't know you had to have a PR person or an agent to do your sales. I went there and did the show, which went okay. It was just very different from the sort of thing you saw in fashion then. I didn't have any shoulder pads and the looks were very minimal. I used black and white. The silhouette was spare and simple. I got rid of all the seams and nothing was ironed. I think some people didn't really understand it. Do you still have pieces from that first collection?

Yes, I think they must be somewhere. But where? (more laughter)

Do you think it was too directional or avant-garde for people to understand it?

I don't know if it was avant-garde, I just didn't seem to have a client for it. I left Paris after the show and thought: "Ok, what do I do now?". I didn't really have a specific plan, so I went door to door and showed my work, selling some pieces here and there. I was doing bags and jewelry, too, and that's what sold the most. I was doing well with the accessories, but that wasn't my goal. I continued making collections and showed in Paris again in the early 90s. Then I decided it'd be better to show in London… I mean, it was not easy. Still, it was an interesting period for me, because I had so much time to experiment.

You had to learn about business, I guess.

I don't know if I really learnt about business then. That side of things came much later.

When did your career start taking off? Did it happen over the past few years?

When I was in London, I had about three stockists buying my clothes, which don't exist anymore. That was my rent money and what helped paying for fabrics. It was tough, but interesting at the same time. I felt very free.

Did you always believe in your work?

I'm very persistent as a person and, even though I doubted myself a couple of times, things turned out fine.

Was it always important for you to be independent and work for yourself?

No, not at all. In fact, I was open to suggestions from others. It just never happened.

Why did you leave London to go back to Paris?

I realized Paris was much more structured than London in terms of fashion. Even though London has changed, you don't get all the buying offices there that you have in Paris. You don't have all the fabric agents either. Paris is a center for fashion, even though I have to admit it took me three years to learn the language. The thing is, I quite like going somewhere where I don't speak the language or feel like an outsider. That appeals to me. I remember my first year in Paris. I changed apartments about ten times before I found somewhere I was comfortable with. I still wanted to work on a new collection, which was hard since I didn't really have a studio. I ended up moving into this place where the owner turned out to be a designer. It was complete coincidence and she happened to know a friend of mine in London. In the end, I worked for her for a few months. That was actually my first time working for someone, but I did my own thing once my working day was over. That was 91 or 92. I was still making clothes for my London clients at that point. In fact, I have never really stopped since 89. 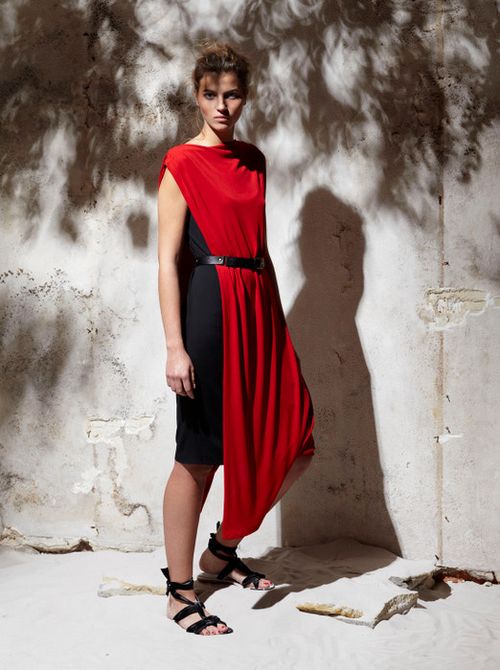 It's amazing. I didn't think you had been designing for so long.

I started to sell in Paris and contacted all the buying agencies myself, going there every season, even if they said no. I got a client in Japan, too, which made me feel good. In fact, I wanted to sell to all the stores I have as clients now.

I was introduced to an agent -which I still have today- and that opened a lot of doors for me. Just watching her helped me learn a lot about how the business works. She's a bit of a mentor to me and I have total respect for her.

Do you feel like you've reached some sort of level where you're satisfied now?

I only felt satisfaction once. That's when I wrote my first order for accessories. I remember looking at the cheque thinking "Wow!" (laughter)

And do you feel the same way now than you did then?

The more you know about this business, the less likely you are to be interested. First of all, it never stops. You're always behind with your work. It's also about numbers for a lot of people and that is not the reason why I went into fashion in the first place.

Your clothes are refined, but comfortable and easy to wear. How would you define your signature style?

When I look at my clothes, it feels quite consistent. I guess I have a way to construct garments and drape fabrics that you could see as my signature. I try to challenge myself every season and enjoy exploring new ideas and techniques. The stores tend to ask you for the more familiar stuff first, because that's what they're used to. I think it takes a while for people to adapt to changes. 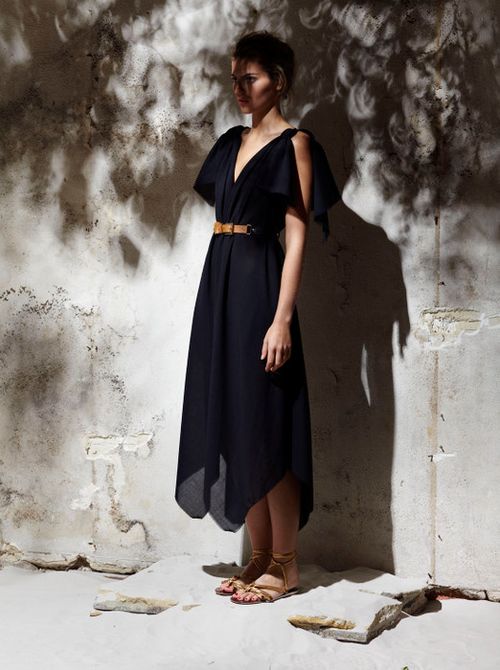 Are you planning on doing shows again?

Sure. I've done them before and enjoyed them. I think it's harder sometimes for people to understand what your message is if you don't have a show to help you do that. The last show I did was three years ago in Paris.

You mentioned Calvin Klein at the beginning of our talk. What was it that you liked about his style?

I guess it was that whole American sportswear thing, which still inspires me. It's a philosophy I adhere to. I don't think people want to feel constricted in their clothes. I've always believed in that.