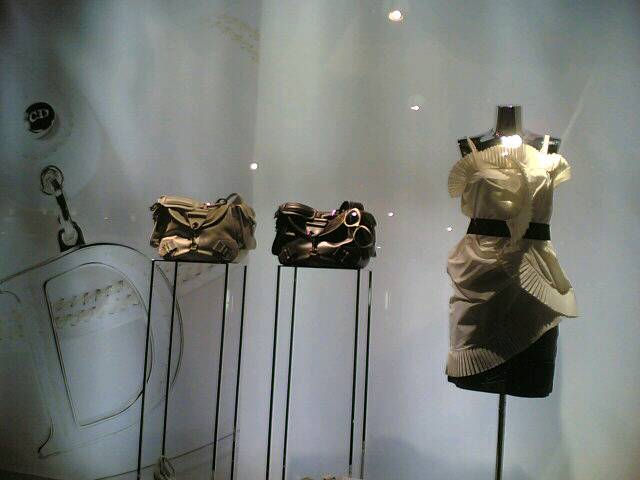 I was walking home last night after seeing a pretty dreadful film, in fact so bad that it was almost, but not quite, good. It was only my love for my friend that kept me in my seat for the entire time, If I don’t like a film after the first 7 minutes, I usually just leave. This was UltraViolet, made me think of the old Andy Warhol character but had nothing to do with her.

On my walk I passed in front of the Dior window and was amazed by the ugliness and bad cut of this dress.It looks totally home made and like anything goes. First I thought that it was a sale window and made out of paper and for that it worked well but that was certainly not the case. Probably it is going to sell like hotcakes, surely the bags will.

This appeared on PAGESIX.COM:
BALDWIN LOSES THE HALSTON PART

ALEC BALDWIN has lost out on playing his dream role of legendary fashion designer Halston, who will now be reincarnated on the silver screen by Brendan Fraser. While initial reports said Baldwin was too old to take up the part, others say other factors came into the decision. “Too old?” Steven Gaines, whose Simply Halston biography inspired the film that will be directed by Daniel Minahan, told PAGESIX.COM. “What about too fat? This movie will do for Brendan Fraser what Capote did for Philip Seymour Hoffman.” Baldwin, whose famous temper was apparently behind Patricia Field’s decision to give up on styling The Girls’ Guide to Hunting and Fishing, has made no secret of his ambition to play Halston in the past and was originally thought to be in line for the part opposite Ally McBeal’s Jane Krakowski as Liza Minnelli. “Halston was this incredibly talented guy whose success obscured how great he really was,” he once said of the designer who dressed and partied with the Studio 54 set, including Minnelli, Bianca Jagger and Elizabeth Taylor. “He even lost the rights to his own name because of some ill-conceived deals he had with retailers. Here’s a man who watched his Fifties, closeted, Boys in the Band era gay culture dissolve under the weight of Aids and become militant. By the Eighties, he was surrounded by younger men he was dating and sleeping with who were the new gay, completely out there and completely outspoken. I’m not anything like this guy