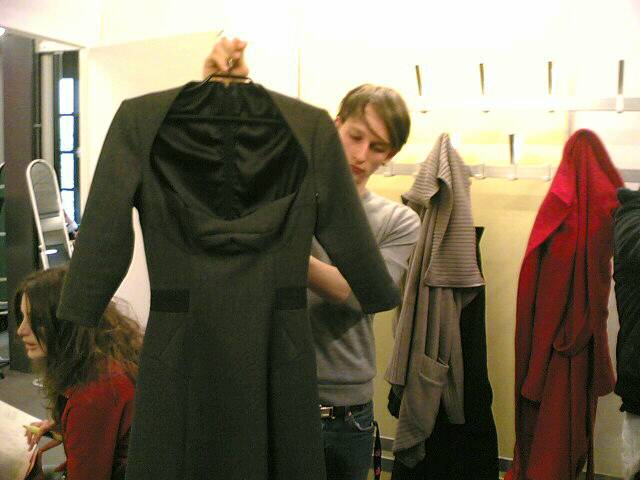 The Auditorium Stravinski, Montreux was the location for the Femina young designers award. Before the show the jury members which included Hermann Fankhauser, aka Jim of Wendy & Jim, Francois Girbaud, l/2 o Marithe et Francois Girbaud, he was the president of the jury, Angelique Westerhofa, the Director of the Arnheim school in Holland and of the Dutch Fashion Foundation, Benoit Missolin and Cristian Reymond who took care of the jury and it’s deliberations, visited each of the designers and had a look at their collections. I was divided between the collections of Pierre Millasson, who did a Balanciagaish collection that was beautifully cut and coherent and Renata Mika. Her collection was inspired by her Polish grandmother. Before the runway show I thought that Pierre  would get my vote for the first prize and  Renata for the second prize but after the show I changed my mind about the order. I thought that Pierre’s collection did not look that strong on the runway and that Renata’s looked more modern and more original. Pierre won the prize of the public and the 2nd prize and Renata won first prize.  The wooden walls and ceiling of the Auditorium Stravinski provided the perfect background for the event not to mention the perfect acoustics.