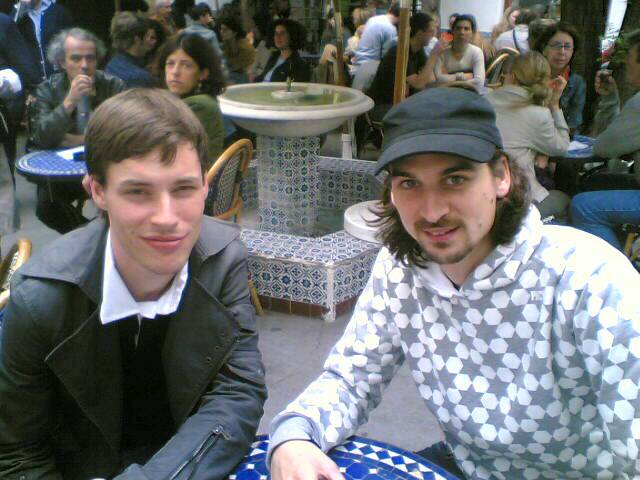 This is probably not the best photo of the two photographers Hoffmann & Heilgemeir taken by me at the Mosque where we went for a tea during the photo shoot for Style & the Family Tunes Magazine produced out of Berlin.

After the shoot I went home and took a look at their cd of images on  the Guca  music festival. Guca is the world capital of trumpet music and  along with the images I was enjoying the great music. Guca is located about 3 1/2 hours outside of Belgrade. I liked the two of them even before I saw their images.

P.S. Since I’m showing you my favorite tea spots, I forgot to slip this into my Antwerp post. As I told you I had an interesting day in Antwerp visiting with Peter Ceursters from Fragma. Here is a memory from our last tea before boarding the train for Paris.

P.S.S. I also found out the name of the director of the film that I really liked when I was at the Beyond Desire expo at Modenatie, Isaac Julien it was a film on blaxploitation and was called ‘Baaadassss Cinema’. If you visit the  exhibit try to make the time to watch the film.