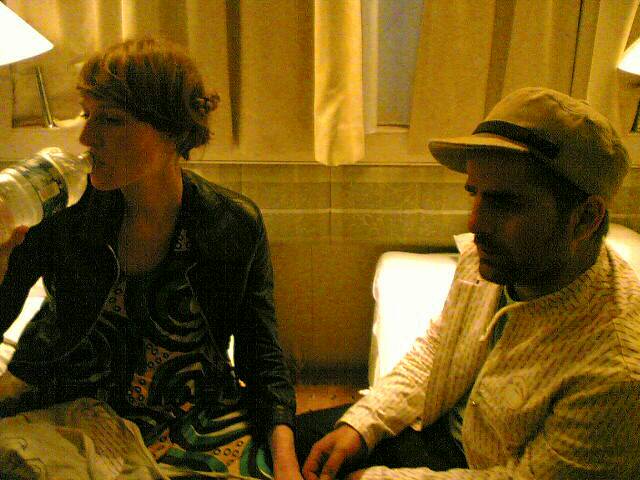 I cannot believe that the gumball rally is over and that I’m finally back to Paris. It really was a lot of fun and exhausting beyond belief. The Eley Kishimoto car won the Cleanest Car award which was a fun award considering that every morning Linda and Yoon Hee were out in their Eley Kishimoto shorts polishing the car. They were totally into it and the car was always the best looking one on the road. I did think that the Style Award should have gone to them but in fact it went to the two guys in the circa Las Vegas Elvis Presley looks. Maybe that was more in sync with the gumball taste. The Ice Cream truck won an award but none of us were sure exactly what that award was. We were all expecting the 40 mile an hour vehicle to win the spirit award. Everyone was always smiling when the truck finally pulled into the check point with Green Sleeves filling the air. The driver of the truck is directing a film called G.I. Jesus.  In fact the Spirit of the Gumball award went to one of the girl teams that I had never even seen during the whole rally. That was a bit of a surprise, my bets for the spirit award were for Eley Kishimoto, Richie in his 70’s dodge with the huge speakers or the ice cream truck . Another life time gumball award went to Yorgo’s co-driver, Carlton. He’s been in the gumball rally since it began and last year was driving his motorcycle when he had an accident which  destroyed his one leg for the past year. I don’t know the future for that but hopefully it will not be  permanent, at any rate it does not detract from his tremendous charm. There were 11 prizes in all  but I have clearly forgot a few of them. THe rally is over, the car made it, we made it, no major problems, a few tickets but everyone held on to their drivers license except for the organizer, Maximillion in his ferrari 550 LM. His license was taken from him as he entered Monte Carlo .