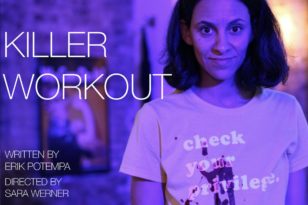 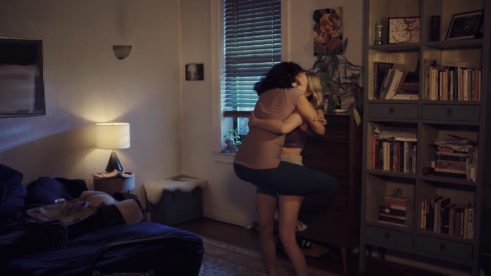 Is violence justifiable in a violently oppressive culture? This is the main question explored through the dark, satirical comedy web series Killer Workout. Directed by award winning filmmaker Sara Werner, the series is created by NYC-based personal trainer/writer Erik Potempa and produced by his wife Yvonna Pearson wanting to shed light onto the inequality, classism and racism many Americans experience on a daily basis.

Killer Workout uses horror, comedy, and violence as a vehicle to explore the struggles faced by Joy,  a 31 year old broke, bi-racial, queer, female personal trainer for the elite of NYC. Struggling to fit into a society that constantly disrespects and others her while compensating her high level service with far less than adequate payment, Joy finally snaps as a result of a particularly offensive client’s racially charged sexual advances. This little violent BDSM matinee surprisingly exhilarates a traumatised and broke Joy as she begins to feel like she may have just found her “true purpose”: brutally murdering toxic rich assholes!

The series also stands as a commentary on the current economic conditions, where 61% of Americans are living paycheck to paycheck, with the top 1% controlling 32% of the wealth. Potempa explains: “Job security depends on how we as workers gracefully handle outrageous demonstrations of classism and condescension (stroking egos, deferring power, and eating reactions to abusive behaviour in order to stay employed). The wealthy are rarely held accountable for their toxic behaviour, often leading to physical and emotional damage in exchange for inadequate compensation. To understand the magnitude of the issue we just need to look at the hashtag #EatTheRich, which has become a very popular handle of late in response to this widespread abhorrent behavior of the toxic elite.”

Killer Workout is an exploration of repressed anger towards the violently oppressive system that we have been born into. Inspired by a true story, it addresses the abuse carried out by a self proclaimed feminist liberal. The series does not condone violence; rather it uses violence as a tool to externalise the trauma of what it means to be “broke as fuck”, i.e. living paychek to paycheck in a capitalist society. As a queer woman of color herself, producer Yvonna Pearson was especially drawn to the the main character for how she uniquely comes to own and express her anger. She explains: “Black women have often taken on the burden of the world’s violence – becoming, as Katori Hall puts it in her play The Mountaintop, ‘the mule of the world’. Black historical heroes and sheroes like that of James Baldwin, Malcolm X, Angela Davis, Assatah Shakur throughout their lives were in constant struggle with this same violently oppressive system and did not always take the road of the pacifist. In Killer Workout [Joy] gives me the catharsis of seeing my inner fury validated on screen.”

Sara is an award-winning director whose work contains positive ulterior motives of helping others, with a strong focus on activism, feminism, gender and sexuality. She received her B.A. in English, with concentrations in Performance and Social Activism, Theatre and Writing from Monmouth University. Upon graduation Werner interned with NewFest and later with the Gay & Lesbian Alliance Against Defamation (GLAAD) in NYC where she learned first-hand of film’s power to change hearts and minds. She received her M.F.A. in Motion Picture ProductIon from the University of Miami after making her award-winning debut as a Writer/Director with her first short film AURORA. AURORA has screened at various venues around the world from Paramount Studios to Istanbul. She has had the fortune of directIng various music videos, web series and award-winning short films since, including a short with the University of Miami and the Stephen King FoundatIon. Originally from Cape May, New Jersey she currently resides in Los Angeles, California.

Making his living as a private personal trainer in NYC for the past 15 years, Erik has become a connoisseur of shitty neighborhood gyms…and an expert at dealing with toxic rich assholes! He  loves writing about said topics because it’s therapeutic, fun… and stops him from going to jail! His 30min pilot for Killer Workout was a finalist for last year’s Sundance Episodic Lab and his 30min pilot, Pititski’s Gym, was just voted top 5 pilot scripts of 2022 by the Save The Cat! 2022 Screenplay Challenge

Yvonnafirst began her career in storytelling while in elementary school in Washington D.C. — it was love at first monologue. From there she went on to perform throughout high school and into her college career at NYU as an undergrad where she received honours while obtaining a B.S in environmental science/biology. While briefly performing as a person who can stand working a 9-to-5 job, her desire to be a storyteller became all that more crystallised. Whether it be short-form, long-form, stage, or screen; Yvonna works to be a part of projects that illuminate the meaning of this thing we call life as humans in a way that makes us more vulnerable and perhaps even open to change. Currently Yvonna resides in Long Island City, New York with her fiancé/creative partner, Erik Potempa. She has just finished up the coveted 2021 ABC/Disney showcase! As an actor, you can catch her on the 5th season of THE CW’s Dynasty appearing as Sasha, SHOWTIME’S new series Flatbush Misdemeanors, as well as Jasmine in the upcoming The Best Man: The Final Chapters.