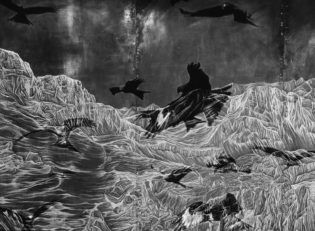 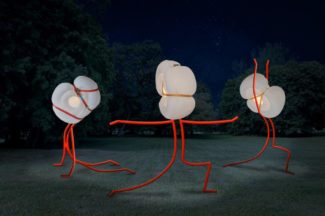 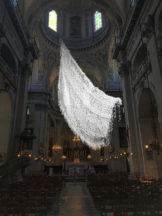 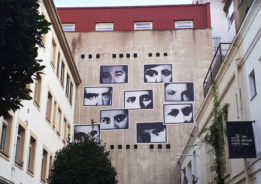 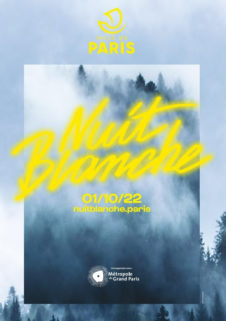 October 1st is the 20th anniversary of the Nuit Blanche the Parisian event that starts at 19h and ends at 5h. This year there will be 4,000 artists, french and international, emerging talents and established ones. For four consecutive years, Nuit Blanche has been an event of metropolitan scope, with numerous events in several municipalities of the Greater Paris Metropolis. Since its creation, Nuit Blanche has attracted many cities around the world, around the sharing of common values of art beyond borders. After the pandemic, in the wake of Nuit Blanche in Paris, some thirty cities resumed their events. In Europe, Bilbao, Malaga, Seville, Venice, Rome, Vilnius, Bratislava, Leeds among others; in America, Montreal, Toronto, Dallas, Miami, Merida, Belo Horizonte, Buenos Aires; in Asia, Taipei, Kyoto, in Australia, Shepparton, in the Middle East, Tel Aviv.

To give you just a taste on the more than 200 artistic events in paris, in the metropole around Paris and for the fist time in Rouen and au Havre.

Kitty Hartl has proposed 13 artistic projects in Paris around the theme of The Garden of Earthly Delights and the crossroads between art and sports. The Cultural Olympiad is part of the history of the Olympic and Paralympic Games. From their ancient origins, the Games have combined sport and culture. Between 1912 and 1948, artistic competitions were even on the programme. It was finally at the Barcelona Games in 1992 that the Cultural Olympiad was included in the programme of the host cities. It was then decided to organise a multidisciplinary artistic and cultural programme around Olympic values during the four years preceding the sports competitions.
With the hosting of the Games in Paris in 2024, the City of Paris has been fully mobilised since October 2021, alongside Paris 2024, to bring the Cultural Olympiad to life for Parisians until September 2024.

With this new edition of Nuit Blanche, several large-scale projects, mixing art and sport, are proposed to the greatest number of people by the artistic director of the edition, Kitty Hartl:
▶ a performance between theatre and sport by Massimo Furlan at the Charlety stadium, re-enacting the mythical and dramatic match in the history of football, which pitted France against Germany in the 1982 World Cup semi-final;
▶ a participative and electrifying meeting at the Canopée des Halles, between contemporary dance, sport fashion and urban dance, with Maud le Pladec, the fashion house Koché and Mounia Nas- sangar.

Throughout Paris 110 artistic projects are proposed by the Greater Paris Metropolis in 23 cities, 10 walks, bike rides and bus rides.

There is so much happening that it is impossible for me to list it all. Stephanie Luning has created an Island of Foam, a monumental sculpture made out of foam. The German artist takes the piazza in front of the Centre Pompidou.  as her canvas.

SMACK is a collective of Dutch artists that base their digital works on 3D imagery. They interpret Jerome Bosch’s The Garden of Earthly Delights. The virtual paradise is presented in the courtyard of the Aître Saint-Maclou in Rouen and as an NFT.

Koche, presents a retrospective fashion show with a diverse casting using upcycling on a diverse and authentic casting. At the press conference we had the pleasure of a brief performance by Mounia Nassangar.  WAACK in Paris and DJ Rob Manga will do a performance and invite participation to their clubbing atmosphere.

Étienne Krähenbühl is a Swiss sculpture who has created a sound sculpture at Place de la Samaritaine rue de la Monnaie, 7500l, there is even Cabaret New Burlesque with Julie Atlas Muz, Mimi Le Meaux, Dirty Martini, Kitten on the Keys and Roky Roulette. Kitty Hartl is the art director of the troupe.

Mariona Benedito and CUBE.BZ is a visual and sound installation at the Parvis of the Hotel de Ville. If you happen to be epileptic it is advisable to skip this one.

KINO has created a light sculpture in the form of a tree which will be at Terminal 4 at the Orly airport and in the garden of Nelson Mandela 75001 and Place Baudoyer, in the 4th and the Parvis of Hotel de Ville. The sculptures will be visible from 19h to 5am.

Purple Rain by Pierre Ardouvin which is an immersive installation at the Academie du CLimat 2, place Baudoyer, 75004.

Artists that had participated in the Nuit Blanche

Celebrations at the Hotel de Ville, enjoy eating Pierre Herme macarons that are part of an enormous sculpture and enjoying a recital by Chrystabell. Chrystabell has worked with David Lynch on soundscape of many of his films. The entrance at 3 rue de Lobau

A Photography retrospective of twenty years of artistic creation, through photographs, films and works. On the gates of the Hotel de Ville from 12/09 to 12/10.

The above is only a partial listing of all that Nuit Blanche has to propose, for more details I recommend you click on https://www.paris.fr/nuit-blanche-2022