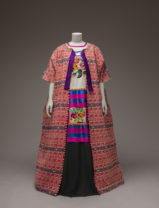 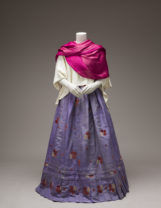 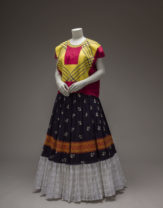 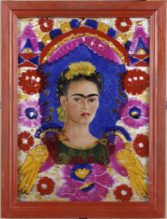 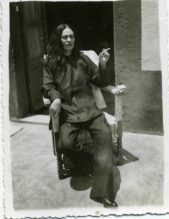 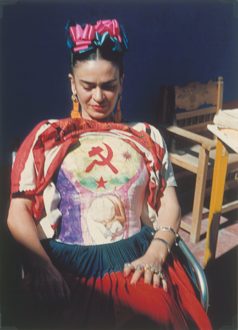 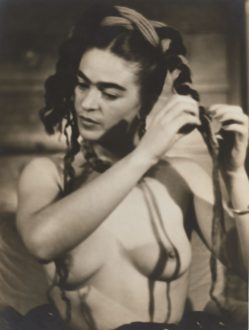 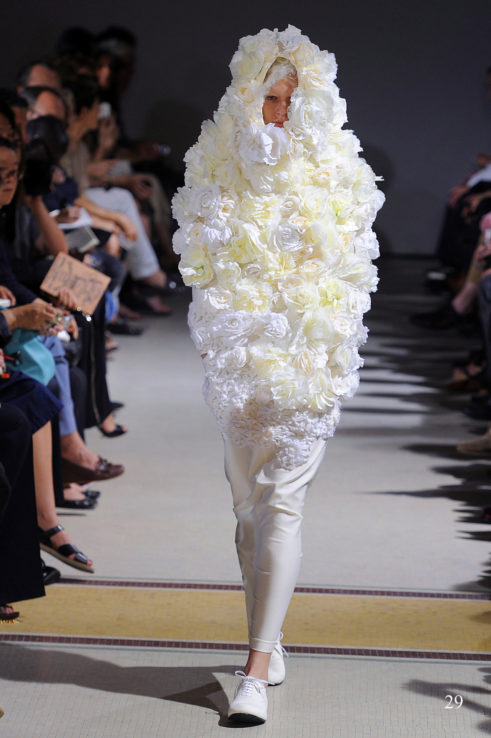 The exhibition Frida Kahlo, au-delà des apparences [Frida Kahlo, Beyond Appearances] opens in Paris September 15- March 5th at the Palais Galliera. The visitors will be able to explore the private side of the artist’s life, and to understand how she constructed her identity through the way she presented and represented herself.

I visited the Museo Frida Kahlo when I was in Mexico City about 7 years ago so I was able to experience some of her personal effects and I remember there was a mirror over her bed that she used to help her paint. The Museo Frida Kahlo has lent the Palais Galliera over 200 objects from Casa Azul, the house where Frida was born and brought up. You will find garments, accessories, correspondence, cosmetics, medicines and orthopaedic aids. When Frida died these articles were placed under seal by her husband the Mexican muralist Diego Rivera, and were not discovered until 50 years later in 2004.

This precious collection – which includes traditional Tehuana dresses, pre- Columbian necklaces that Frida used to collect, and hand-painted corsets and prosthetics – is presented, along with films and photographs of the artist, to form a visual narrative of her extraordinary life.

Frida Kahlo used her appearance as a means of expressing her doubts and feelings about herself and her politics: after a serious accident at the age of 18, Frida devoted herself to painting. She adopted traditional clothing, which was a statement of her Mexican identity, but also a way of coping more comfortably with her disability. The exhibition Frida Kahlo, au-delà des apparences traces how the artist cultivated her image. An image that amounted almost to a manifesto reflecting her cultural heritage, but also her experience of gender and of living with a disability.

In an exhibition that is both biographical and thematic, the Palais Galliera looks at the artist’s visit to Paris and her relationship with the Surrealist group.

The visit continues with a capsule exhibition from 15 September to 31 December 2022, which considers Frida Kahlo’s influence on contemporary fashion and how she has remained an icon and source of inspiration for designers such as Alexander McQueen, Jean Paul Gaultier, Karl Lagerfeld for CHANEL, Riccardo Tisci for Givenchy, Maria Grazia Chiuri for Dior or Rei Kawakubo for Comme des Garçons.

Section One: « Here I was born » Garden level, curved gallery

Magdalena Carmen Frida Kahlo y Calderón was born on 6 July 1907 in Coyoacán. Her mother, Matilde Calderón y González, was of mixed Spanish and indigenous origin from the Oaxaca region. She passed on to Frida her taste for traditional clothing from an early age. Her father, Wilhelm (Guillermo) Kahlo, a German emigrant, arrived in Mexico in 1890. He became a major government photographer, capturing Mexico’s architectural heritage and its path to modernity. He also highlighted Frida in numerous portraits that showed his affection for his daughter, and passed on to her the art of staging and self-portrait.

Several events marked Frida’s life. First, at the age of six, she contracted poliomyelitis. To cope with this illness, which forced her into isolation, she invented an imaginary friend. This formative experience gave rise to her double in painting, a recurring motif in Frida Kahlo’s work. The other major trauma occurred on 17 September 1925: Frida Kahlo suffered a serious accident at the age of eighteen, which forced her to stay in bed for months and abandon her medical studies. It was then that she began to paint. Finally, four years later, in 1929, she married the internationally renowned artist Diego Rivera. The couple divorced in 1939, before remarrying in San Francisco in 1940.

Frida Kahlo was born in Casa Azul, lived there most of her life and died there in 1954. Her parents, who built the house in 1904, decorated it in the European style that was in vogue at the time. Frida Kahlo and Diego Rivera renovated it in the 1930s. They repainted the grey walls a bright blue and filled their house with objects reflecting their attachment to all things Mexican, including folk art, pre-Hispanic sculptures and votive paintings. Casa Azul became a cultural centre, attracting personalities from Mexico and elsewhere. from Mexico and elsewhere, including Leon Trotsky and André Breton, who Breton, who arrived in the country in the late 1930s.

Frida Kahlo left Mexico for the first time, shortly after her marriage, when she accompanied Diego Rivera to ‘Gringolandia’, as she called the United States. Rivera was a famous artist and was commissioned to paint murals in San Francisco, New York and Detroit.

Her experiences in the United States (1930-1933) were both complex and decisive. In San Francisco, photographed by leading photographers, she developed her distinctive Tehuana style and began to paint more seriously. In Detroit, a traumatic miscarriage radically transformed her art, leading her to reinvent herself as a painter and to shatter taboos. In 1938, she triumphantly returned to New York as a full-fledged artist, with her first solo exhibition at the Julien Levy Gallery

After her beginnings in New York, Frida Kahlo was invited by André Breton to exhibit her work in Paris. However, nothing was ready for her exhibition when she arrived in January 1939. Finally, the Galerie Renou et Colle organised a group exhibition entitled Mexico, in which eighteen of her works were shown. Frida Kahlo was warmly welcomed by the many renowned artists present at the opening. France acquires her self-portrait The Frame, a first for a Mexican artist.

During her brief stay in the French capital, Frida Kahlo falls ill and is hospitalised. Marcel Duchamp and his companion Mary Reynolds, whom she adored, looked after her tenderly.
Frida also enjoyed spending time with Dora Maar, Jacqueline Lamba and Alice Rahon, exploring Paris, its flea markets and its fashion.

The accident that nearly took Frida Kahlo’s life at the age of 18 put an abrupt end to her dream of becoming a doctor. During her convalescence, she began to paint with the help of a folding easel and a mirror built into the canopy of her bed. ‘I paint myself because I am so often alone’, she said, as self-portraits became an essential aspect of her art.

Frida Kahlo underwent dozens of operations in an attempt to alleviate her serious health problems and pain. She was sometimes forced to wear corsets and other medical devices, which she decorated and transformed into works of art. In shaping the image of her disabled body, Frida Kahlo played a pioneering role. She built a visual vocabulary with which she expressed physical and emotional suffering, while at the same time describing her own resilience and ability to create meaning, joy, beauty and art.

Frida Kahlo’s powerful self-portraits, the photographs for which she posed and her carefully composed outfits are complementary modes of artistic self-creation.
As a teenager, Frida dressed in unconventional ways to express her personality and to hide her leg, which was damaged by polio. By the age of 20, she adopted traditional Mexican dress, which she wore throughout her life. Although she created a unique hybrid style, blending elements from different regions and eras, she identified particularly with the women and her matriarchal culture of Tehuantepec. She adopted their embroidered blouses, long skirts, elaborate hairstyles and rebozos (woven shawls) in a fascinating personal interpretation of mexicanidad (Mexicanness).

Unique, transgressive and unforgettable, Frida Kahlo has become a world-renowned cultural icon. Her influence as a muse in the history of fashion memory has been continually re-evaluated by contemporary designers who have used the various symbols of Frida Kahlo’s identity as a source of inspiration, forming a visual repertoire that addresses themes such as trauma, disability, ethnicity, sexual identity and politics. Accessories, adornments and body extensions were used as metaphors to conceal, reveal and interpret her multiple identities and hybrid style.

The exhibition at the Palais Galliera, which opens in September 2022, continues the itinerary begun in Mexico between 2012 and 2014, and then in 2018 at the Victoria and Albert Museum, London, while offering a new perspective on the history of this artist whose charisma and incredible style continue to captivate.

The catalogue published for this Paris exhibition is an expanded edition of the catalogue created by the Victoria & Albert Museum in 2018.

Circe Henestrosa, curator and designer of the exhibition, Head of the School of Fashion, LASALLE College of the Arts, Singapore