Travelling back to the Roaring Twenties Paris, for the Armani Privé fall/winter23 haute couture collection, Giorgio Armani found his muse in the Polish painter Tamara de Lempicka, also known as the Baroness with a Brush.

Titling the collection Pétillant (meaning sparkling), the polished art-deco paintings where Lempicka portrayed the elite French society of the 20s, acted as a roadmap for Armani, mirroring the “rebellious elegance” the artist became famously known for.

“Realism, a distinctive trait within Giorgio Armani’s style, always filtered through his personal vision and interpreted through refined art, is a constant presence in a collection that arises from the need to give new space to sparkle and frivolity, offering into dreams and creativity,” the press notes read.

As if entering a cabaret club, the show was set in a mysterious ambiance with bistro tables and lush lights. Models walked in the spotlit runway wearing beaded jackets, evening gowns in crystal mesh fabrics, embroidered waistcoats, sparkling column dresses that captured and reflected the light in unpredictable ways. The line-up carried the silhouettes of the 1920s, modernised and Armani-sed. A deep blue coloured strapped mid-length dress with pants for eveningwear, resembled Poiret’s iconic lampshade dress, while harem pants were rejuvenated and styled with embellished jackets that bore rounded shoulder pads. Silk jacquards, beaded jackets with Mandarin collars carried influences from the East. Fusing the Western cultures with the Eastern.

For many designers like Armani, haute couture comes as the highest form of expression in fashion. A bridge which connects reality with dreams, a blend of craftsmanship and fantasy. This was a collection suitable and wearable for all generations. Dreamy yet realistic. 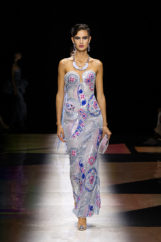 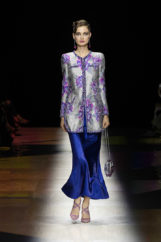 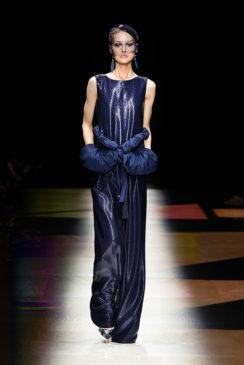