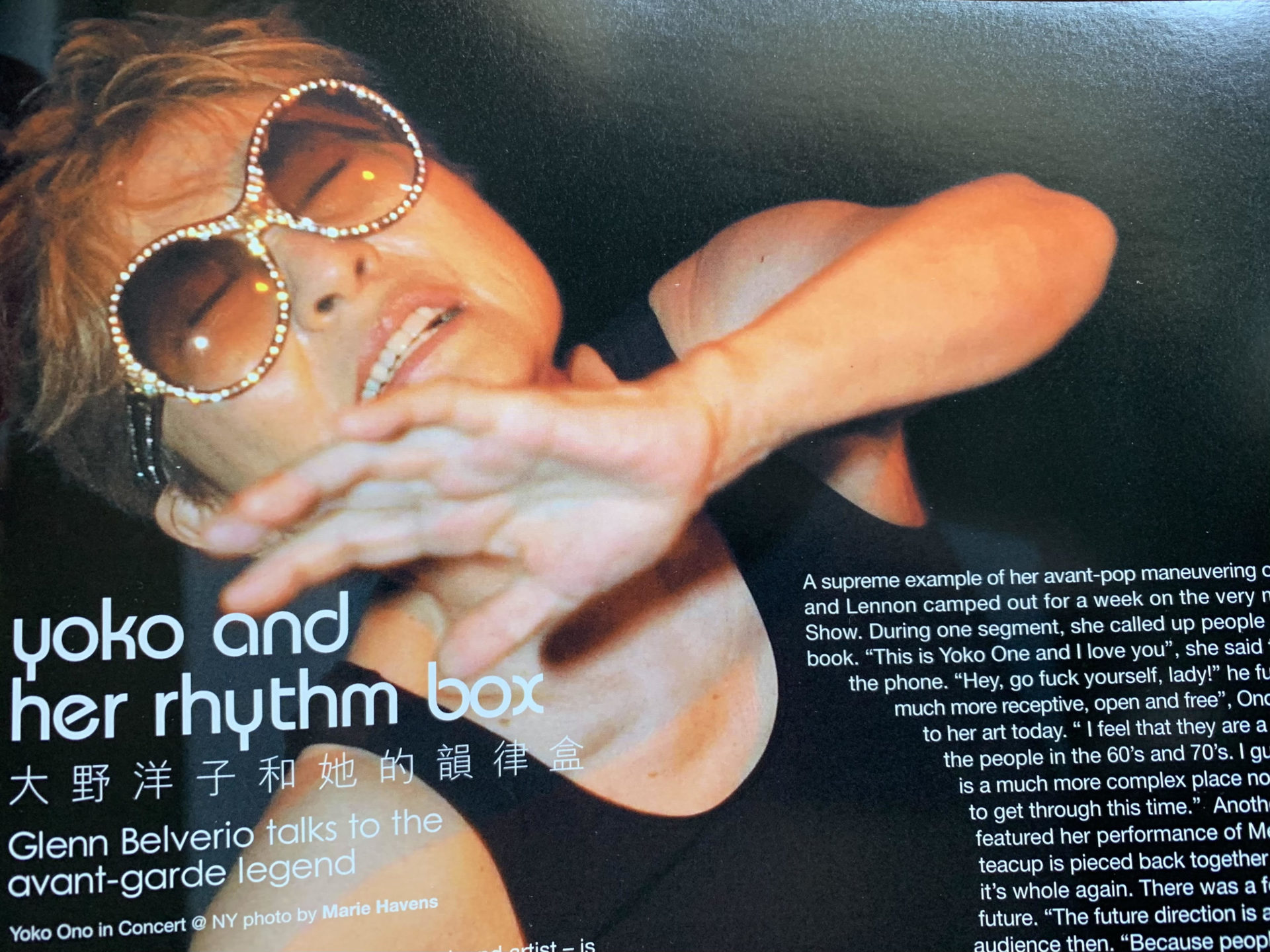 Even though the new Yoko Ono biography, An Artful Life, has been getting not-great reviews, the good news is that Ono’s artwork and legacy have been spotlighted in these reviews, giving her the prominence she deserves.

I interviewed Yoko for a profile I wrote for the first issue of WestEast magazine, the Asian Pop issue, in 2002. I was in Hong Kong, she was in Paris, so I think we spoke over the phone or through email.

Yoko and Her Rhythm Box
Glenn Belverio talks to the avant-garde legend.

Yoko Ono – the Japanese woman, legend, and artist – is delivering her trademark guttural caterwaul before a crowd of drugged-out muscle queens at the Roxy disco in New York. “Taaaake off your shiiiirts!” she wails imploringly but rather needlessly to the mainly bare-chested crowd. “Taaaake off your paaaants! I’m going to cuuuum all over you!!” When was the last time a 69-year old woman told you she was going to cum all over you? Or, more realistically, when was the last time you even saw a 69-year old woman in a nightclub at 3am, period? A thundering crash of electronic tribal rhythms seems to propel Ono’s yoga-fit body across the stage, her piercing groans and primal screams meshing improbably with the dance beats.

She is performing the dance re-mix of her radical 1971 song “Open your Box” produced by the club wizards of Orange Factory. “Opeeeeeen your leeeeegs!!” Ono’s voice, an instrument that has influenced countless performers, remains as incredibly jarring and wonderfully unsettling as it did thirty years ago. “Omigod, Omigod, Omigod, this is awesome!”, a sweaty, 20-something man with a heavy Long Island accent exclaims as he grabs the arm of a nearby friend.

Generally, this brand of enthusiasm is reserved for the holy presence of, say, Cher – or a drag queen imitation of her – not for an avant-garde artist who is known for presenting challenging, unconventional art and music. “What the audience here likes about my music is that it is different and there’s a strong sense of fun”, Ono comments after the show. “So they feel close to me, I think. I feel close to them too.” Still, one can’t help thinking that the original version of “Open Your Box” would surely send this crowd running for the exits or, more likely, the restroom stalls for a few bumps of Special K to calm their frazzled nerves.

Yet despite the crowd’s Pavlovian swaying and bobbing to the song’s techno bells and whistles, one can’t help feeling that something revolutionary is happening. And Ono has faith in her audience. “Avant-garde was like a small island in the ‘60s. No more. The younger generation, as a whole, is experimental by nature. They have an attitude. I love that. I’m one of them. I always have been. Some really creative and inspired mixes are coming out in result of all this, and the audiences are having a good time dancing to them. It’s totally exciting. It’s magical!” 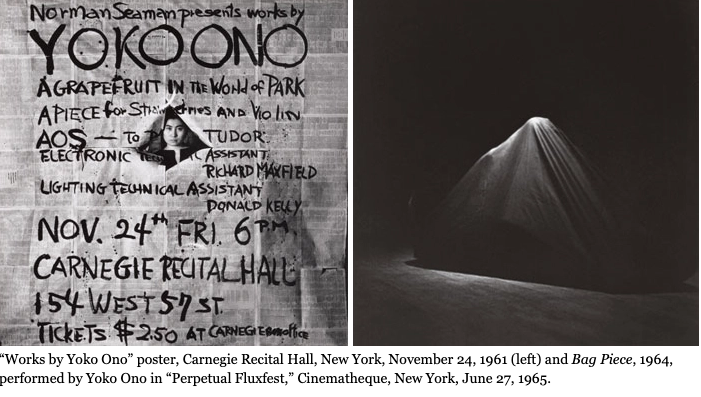 Interestingly, before the Roxy DJ began pumping out the updated grooves of “Open Your Box” that night, Ono chose to make her entrance via a conceptual performance piece that had its debut in 1964. Bag Piece, which was first performed in Japan, featured Ono lying in a black muslin bag causing it to resemble a stone. Knowing that the tweaked Roxy crowd, or just about anyone in this A.D.D.-infected society, wouldn’t have the patience for such an exercise in existentialism, Ono spent only a few seconds in the bag. After she was carried out on stage in it by two muscled hunks, Ono popped out and was greeted by a mixed reaction of surprised joy and confusion.

And therein lies Ono’s specialness and vitality: her ability to import an avant-garde sensibility into the pop moment. It’s something she’s been doing since she met John Lennon in 1966 and something that, at 69-years old no less, she continues to do today. A supreme example of her avant-pop maneuvering occurred in 1972 when she and Lennon camped out for a week on the very mainstream Mike Douglas Show. During one segment, Ono called up people randomly from the phone book. “This is Yoko One and I love you,” she said to one man who answered the phone. “Hey, go fuck yourself, lady!” he fumed. 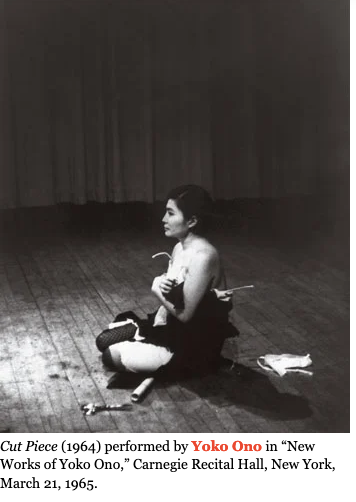 “The audiences are much more receptive, open and free,” Ono says of people’s responses to her art today. “I feel that they are a wiser group of people than the people in the 60’s and 70’s. I guess that’s logical. The world is a much more complex place now, and we have to be wiser to get through this time.” Another segment on Mike Douglas featured her performance of Mend Piece, in which a broken teacup is pieced back together little by little, day by day, until it’s whole again. There was a feeling of optimism about the future. “The future direction is actually beautiful,”she told the audience then. “Because people are getting very pessimistic these days, but actually it’s going to be very beautiful, and we want to show that to people.” 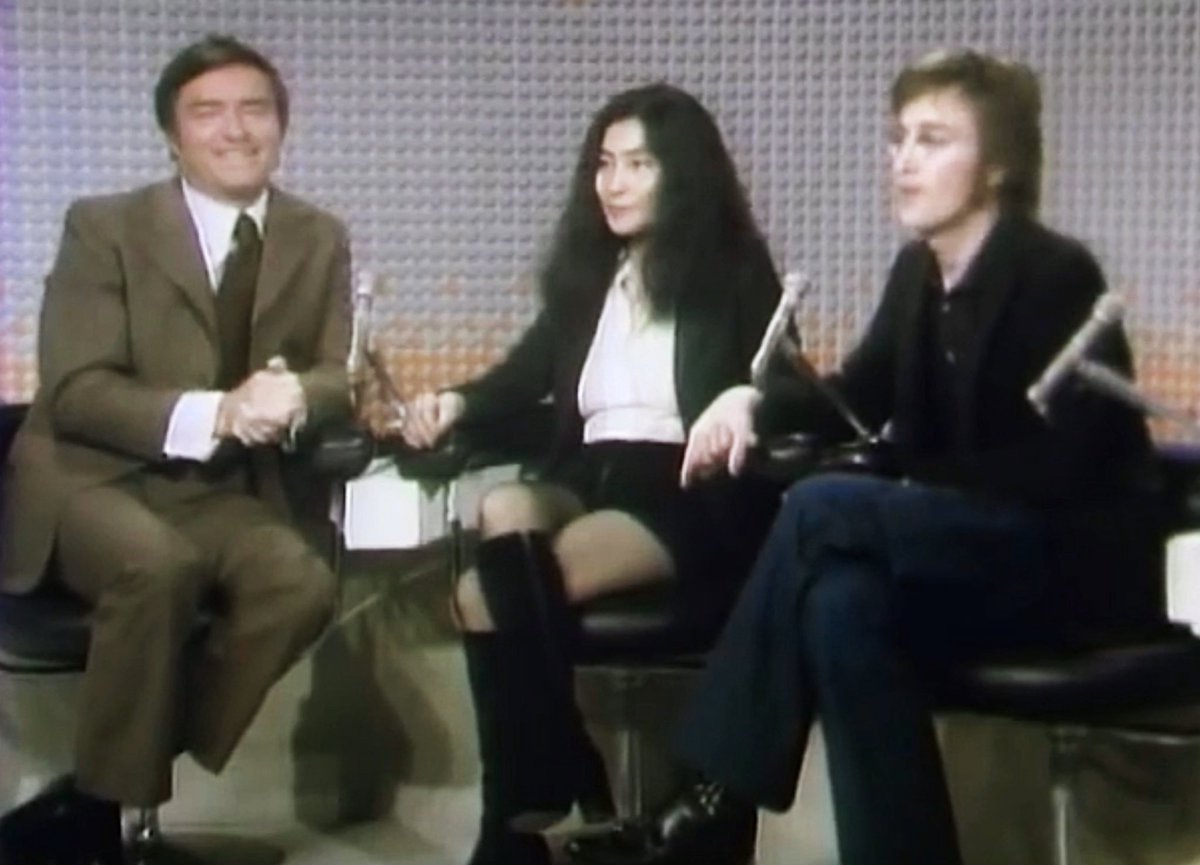 One way in which Ono has retained that sense of artistic optimism today is by bringing it to the dance floor. “My first album was called Two Virgins: Unfinished Music No. 1 (1968). I thought it would be cool to create an album of unfinished music and to ask others to finish it in their own way. I said that then in my interviews. It blows my mind that after thirty-four years what I said then is being realized now in the form of dance club mixes. Just shows that you must be really careful of what you say!”

“Avant-garde was like a small island in the ‘60s. No more. The younger generation, as a whole, is experimental by nature. They have an attitude. I love that. I’m one of them. I always have been.”—Yoko Ono

Many bands and singers from the ‘80s and ‘90s—the B-52s, Sonic Youth, Lena Lovich, Nina Hagen, Johnny Rotten, Diamanda Galas, the list goes on and on—have been influenced by Ono’s uncompromising music and vocal acrobatics. But has she had an effect on today’s saccharine-coated stars of Canto and J-Pop? “I don’t know if they were influenced by my work at all. But it might have made it easier for them to be understood in the West. I hope so. People will be hearing more Asian Rock in the future, only because they have an open ear for it now.” 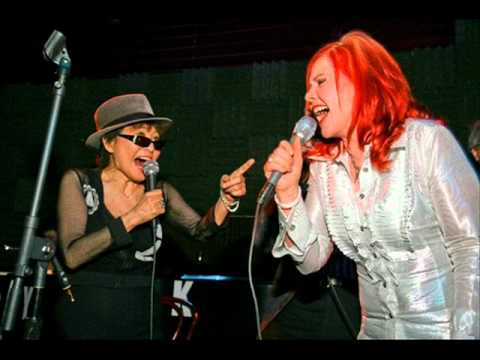 And it seems they have an open ear for Ono after all these years. After playing in clubs in New York, London and Miami, Ono seems elated to be back in the spotlight. More than that, she seems to have been reborn, heating up the dance floor as she defies and dispels the boundaries of aging. “I’m a very physical person. I love to move my body. I especially love to move my body to music. I could dance all night. So it’s great! I feel like I’ve been given a new lifeline. I’m a new performance artist. The newest! The youngest! The bestest! That’s how I feel.”