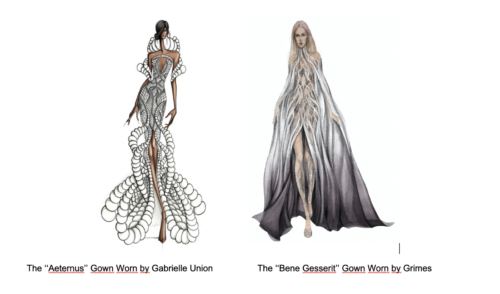 Two exceptional Iris Van Herpen’s gowns that were worn at the MET Gala 2021 by the actress Gabrielle Union and musician Grimes will be auctioned off by Bonhams, the fine art auctioneers on May 24.  The event includes two evenings, May 24 and 25th,  with auctions of unique watches, handbags, sneakers and jewels. Each dress sold at auction will be accompanied by the signed original sketches of the dress and tickets to her upcoming 15 year-anniversary show during the Haute Couture Fashion Week in Paris held on July 4th.

The ‘Aeternus’ Gown, worn by Gabrielle Union, is composed of over 10,000 spheres, cut and layered in size gradients from a translucent white ‘liquid’ fabric and laser cut with a fine silver reflective outline. The innumerous spheres are then handstitched individually to create a seamless and multilevel optical illusion from which three-dimensional waves flare out weightlessly. The delicate and most intricate handwork took over 1.400 hours of making alone.

Grimes has wore a gown that was custom designed especially for her MET Gala 2021 appearance. Entitled the ‘Bene Gesserit’ Gown, the dress is inspired by a distant future as part of the new Dune movie and the Bene Gesserit cult. It is made from silver liquid silicone with a mirror finish and arranged in a laser-cut labyrinth culminating in a 3-dimensional relief on a nude illusion bodice. Each silicone piece is individually hand-casted in three layers. This process took over three hundred hours. From the intricate bodice, twenty-six meters of dramatically draped silk falls organically to reveal hand pleated and black gradient-died layers. The process of making the ‘Bene Gesserit’ Gown took over 900 hours.

Known for combining technology and traditional Couture craftsmanship, each one of van Herpen’s collection is the embodiment of a new understanding of materiality and femininity. Her process of creation is simultaneously an exercise in the imagination and act of becoming. It is an investigation into what was, what is and what is to come. It is a dedication to being in flux.

Ultimately, the brand contemplates fashion as an interdisciplinary language and a dynamic entity, the result of the cross-pollination of various fields: art, chemistry, dance, physics, architecture, biology, design as well as technology. Watch the latest shows here!

“We are so excited and honoured to be working with Iris Van Herpen for this charity auction of these two spectacular gowns. This is the first time that Iris Van Herpen has sold items from her archive, generously donating all the proceeds from the auction between two charities close to her heart”, says Meg Randell, Head of Bonhams Designer Handbags & Fashion department. Bonhams is waiving buyer’s premium on these items ensuring that every penny goes towards conserving our environment. She adds: “The dresses themselves are spectacular, worn by Grimes and Gabrielle Union to one of the fashion highlights of the year – the Met Gala. With cutting edge technology and breath-taking design both dresses occupy an important part of fashion history, and truly are works of art that need to be seen to be believed.”

ABOUT THE AMAZON CONSERVATION ASSOCIATION AND RAINFOREST TRUST FOUNDATION

The proceeds will be donated in support of the Amazon Conservation Association and Rainforest Trust Foundation. Nature conservation has always been a very important cause to the designer. Over half of the world’s rainforests have been destroyed. Each day, over 70.000 acres are lost in deforestation and an increasing quantity of millions of tons of carbon, which are stored within our rainforests, is being released into the atmosphere. A continuation of the destruction of these vital environments runs the risk of losing all of the world’s original rainforest within the next decades, whilst resulting into massive extinctions as well as accelerated climate change. Driving for positive change, Iris van Herpen has decided to support the organisations to help protect our rainforests, stop habitat loss, and save endangered species.

Founded in 1793, is one of the world’s largest and most renowned auctioneers, offering fine art and collectables, motor cars and a luxury division, including jewellery, watches, wine and whisky. The main salerooms are in London, New York, Los Angeles, Paris and Hong Kong, with auctions also held in Knightsbridge, Edinburgh, and Sydney. With a worldwide network of offices and regional representatives in 22 countries, Bonhams offers advice and valuation services in 53 specialist areas. For a full list of forthcoming auctions, plus details of Bonhams specialist departments, please visit bonhams.com