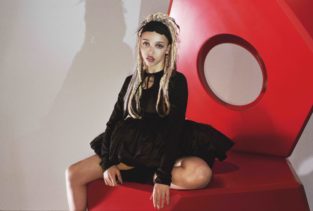 For 2022, Woolmark has enlisted two creative collaborators – FKA twigs and the Isamu Noguchi Foundation –  have come together to create a piece of work celebrating the art of “Play” which is this year’s Woolmark Prize theme – play for creative exploration. PLAYSCAPE encompasses a film, an immersive showroom and special partnership with The Isamu Noguchi Foundation and Garden Museum. The central short film presents the 7 finalists’ creations, including Ahluwalia, EGONLAB, Jordan Dalah, MMUSOMAXWELL, Peter Do, RUI and Saul Nash.

FKA twigs’ collective ‘Avant Garden’ launches its new era in this piece for the 2022 International Woolmark Prize. FKA twigs developed an exploration of play within creativity, which is a method in which the purest expression has a space to be birthed and happy accidents are embraced and elevated.

Isamu Noguchi (1904–1988) was one of the 20th Century’s most important and critically acclaimed sculptors. From the 1930s, Noguchi conceived of playgrounds that offered a radical potential for physical and social interaction. He designed several “playscapes” where the public could directly interact with sculptures in ways typically not possible in a museum.

The film, PLAYSCAPE, was inspired by Noguchi’s vision of play as a creative catalyst. Featuring and directed by FKA twigs, it merges influence from fashion, art, dance, and music. The film opens with an empty gallery of Noguchi’s play sculptures, which becomes populated by a diverse ensemble cast of characters. In the second part of the film the cast enters an imaginary landscape, where a ballet sensibility is combined with elements drawn from hip-hop, modernism, contemporary dance and punk aesthetics. Guest appearances by iconic creatives, activist and model Kai-Isaiah Jamal, DJ and dancer Kiddy Smile along with DJ and artist Princess Julia complement the unique silhouettes and mood of each designers’ collections. Dancers include Ève-Marie Dalcourt, Tania Dimbelolo, Dmitri Gruzdev, Meshach Henry, Salome Pressac, Hannah Raynor, Maycie-Ann St- Louis and Alex Thirkle.

“It is an honour to be chosen by the Woolmark Prize to work with such talented designers and to create my first piece of work with Juliano Nunes, innovator of dance for the Avant Garden collective.” FKA twigs.

“As Isamu Noguchi once said: ‘When the adult would imagine like a child he must project himself into seeing the world as a totally new experience.’ Brett Littman, the Director of the Isamu Noguchi Foundation and Garden Museum.

“For some, play is best left to children. But it is through play that creativity is sparked and new perspectives are created. Our vision for the Woolmark Prize is to create a playground for the next generation of fashion talent to collide with dance, art, music and design. FKA twigs was the perfect collaborator because of her polymathic practice and singular voice. We are indebted to Isamu Noguchi for providing the inspiration to take play seriously.” Zak Kyes on Zak Group’s collaboration with the Woolmark Prize.

The choreographer is  Juliano Nunes and the cinematographer Rina Yang, best known for her work on Euphoria.

The IWP2022 winners will be announced April 26th, selected by an esteemed jury, including: