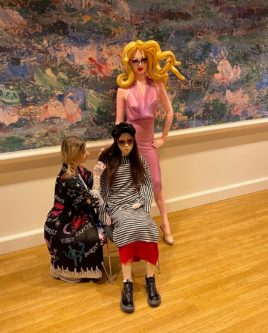 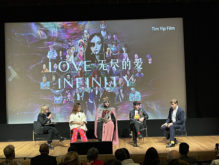 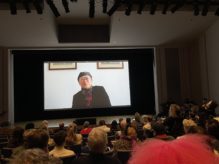 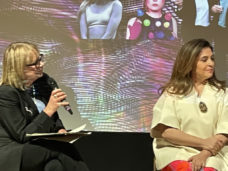 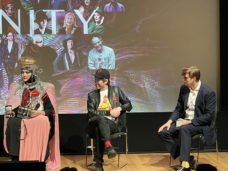 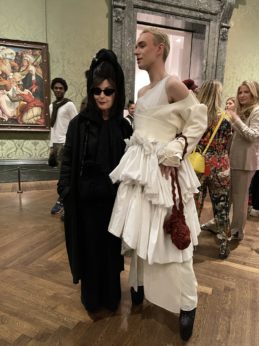 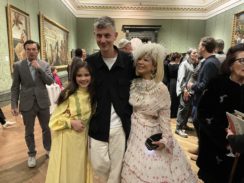 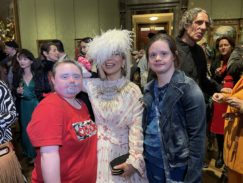 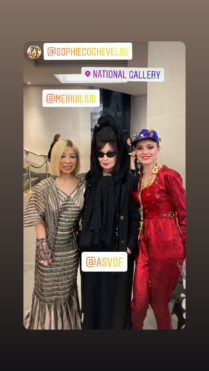 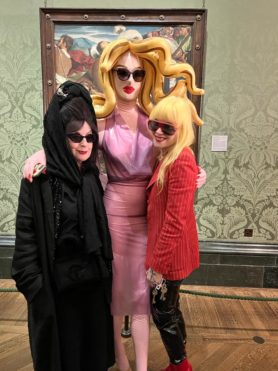 I met artist Tim Yip, Oscar winning Art Director and Costume Designer of Crouching Tiger, Hidden Dragon years ago when we were both in China for an opening. I convinced him to start making his own films and he has not stopped since. When I had my Diane Pernet Paris perfume launch at Liberty in the UK he happened to be in London and I invited him to the dinner my friend Robb Young had organised to celebrate the opening. I sat him next to my dear friend Mei Hui Liu, he said he wanted to see East London and I told him that Mei Hui Liu would be his perfect guide. She definitely was and introduced Tim Yip to the area and her friends such as iconic artists Gilbert and George, fashion designer Vivienne Westwood, pop culture artist Philip Colbert, artist Daniel Lismore and in the end became one of the Creative Producers of the films Love Infinity alongside Maryam Eisler. Tim Yip is the Director, Director of Photography & Editor, Benjamin Teare is Editor & First Assistant Director, Mimi Sun and Tom Bell, Second Unit Camera, Music Composers Rudi Zygadlo and George Finlay Ramsay, Editor & Animator, Yu Shan Guo, Sound Recordist, Stephen Partington, Sound Design & Mixing, Gao Teng Fei, Colorist, Fu Shu, Graphic Designer, Yuh Jiun Jyan, Jie Xu, Animations, Jonathan Gille and Jake Elwes and Production Manager, Nicole Yuen.

Love Infinity comes in two parts, one is a fiction, the excerpt above is from When the Sun Goes Quiet, the other is a documentary- Memorandum for the Next Golden Age. Both films are shown on MUBI. Yip captures the spirit of the capital hungry for originality, sex, liberty and fun. Lili is his companion, she is a human size doll that has been the subject of many of Yip’s art projects. There was no script, the material appears in the process of shooting. Love Infinity – When The Sun Goes Quiet (Semi-Fiction) follows a teenage Londoner, Stella, as she falls headlong into a colourful underworld of dressing up and eccentricity created by drag performer Jonny Woo. Jonny has written a novel, Icon, in which a privileged few ‘nobles’ take refuge from a world in cataclysm. The boundary between the fictional city in the novel and the real city Stella and Jonny live in blurs. Stella journies into Icon without Jonny’s permission, as Lili,  penetrating his dreams. Heaven, Earth and Hell occur simultaneously and in the same person. The question put to the viewer is can we enter into other people’s dreams?

Love Infinity- Memorandum For the Next Golden Age (Semi-Documentary) shows us the birth of the individual under King James 1 of England, subsequent violent repression immediately after the English Civil War re-flowering during the Restoration, subjugation by religious and conservative governments, and proliferation in the 20th century with Hippies, Punks, and youth movements, which today are flattened again by capitalism. This is the Post Human generation looking for connection, but delivered into a human world as imperfect as it has ever been, with social inequality, war mongering, racism, environmental collapse and a pandemic to contend with. Icons of culture are seen in Semi-documentary side by side with members of a young generation who have not yet won their place in history. If you don’t like this world, will you fight for a new one?