For cities with higher vaccination rates in the spring and early summer of 2021, there was a wonderous hopeful reemergence. But then Delta, anti-vaxxers and surges morphed into a black stiletto stubbing out the Gitane of hope. 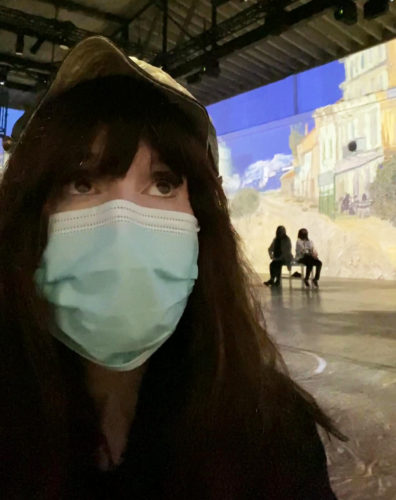 I had too many friends who, though vaccinated, kept that spring pre-Delta social life going, and too many of them got breakthrough Covid. Being immunocompromised added to my hermit retreat. I turned down invites to theaters, concerts, gatherings I very much wanted to attend. But I got the booster and got braver.

Then one day it seemed every bus shelter in San Francisco was covered in Van Gogh: an ad for something called “Immersive Van Gogh,” showing people seemingly inside the artist’s painting. That it would be Van Gogh to help me past my Covid gatherings hesitancy was fitting.

We all seem to have artists that are like personal totems or gravitational points, and Van Gogh has been mine. I was invited to a personalized tour of the Van Gogh Museum in Amsterdam. Standing in front of paintings that I’d only seen as replicas, I was overcome by emotion, to see the swirls, the texture, the layering that create such vibrant colors left me sobbing and joyous, and I could give no words for either. When I traveled to France, a fashion photographer planned a surprise shoot but would not tell me the destination, only it was outside Paris. Finally, our van stopped next to a cemetery on the outskirts of a postcard-like village. The photographer was incensed to find the gates locked, but there was a muddy field adjacent. “Well, he surely walked here, this will have to do.”  He filled me in, we were in Auvers-sur-Oise, where Van Gogh had died and there, that was his grave. “You create out of the same force!” he declared as he photographed me in the field across from where Van Gogh was buried. I felt the interlocking pleasure and terror of his comparison.

So many films have focused on Van Gogh’s madness, his darkness, grim obsession; what is easy to lose is what hides in plain sight, the absolute love and abundant joy of taking in what surrounds you. And that is what “Immersive Van Gogh” awakens. 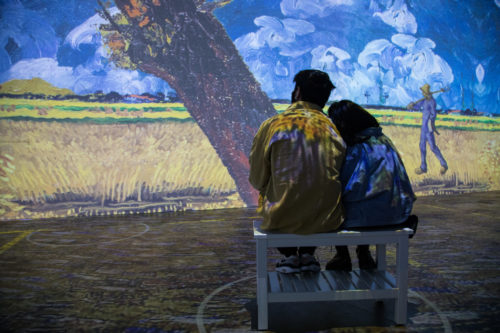 After showing proof of vaccination, I was allowed into Non Plus Ultra’s SVN West, at 10 South Van Ness Avenue in San Francisco. The spacious ballroom of what once was Fillmore West now has circles marked on the floor for distanced seating (pillows are available to rent or as part of ticket packages, and I highly recommend them); there are also spaced seats and in the center, a balcony of sorts allowing a higher vantage.

“Immersive Van Gogh” is not dissimilar to visiting a planetarium, where both you and the show absorb each other. Only instead of making you stare up, there are 40 projectors in the ceiling, saturating Van Gogh’s work onto the surrounding walls, with Luca Longobardi’s lush score deepening the sense of infusion. Images unspool, words from Van Gogh’s hand, fields open, French village seasons animate. I swore I caught the moldering aroma of haystacks, the scent of flowers, even the sharp tang of turpentine for paints, but odorama is not part of the show. Still, it’s so easy to fill all that in as this experience engulfs you. 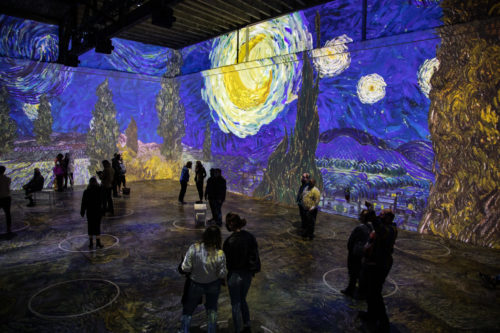 It was hard not to weep at the vastness of the visions. Watching Van Gogh’s winter blossom into spring is a marvel that leaves you gasping, a witness to the wonder of time itself – time spent sheltering in place, separated from loved ones; time Van Gogh spent creating visions that have survived time. When the screen goes black, it does so only to startle with a slurry of stars. This is a Van Gogh of hope, the wonder of movement while being still.

Think of Immersive Van Gogh as your vaccine to assuage the effects of isolation.

Italian film producer Massimiliano Siccardi, with the art direction of Vittorio Guidotti, gives us a 38-minute show that creates an often rhapsodic, cinematic encounter with hints of the divine from such familiar works as Les Tournesols (Sunflowers, 1888) or La Nuit étoilée (Starry Night, 1889).

I left SVN West teary-eyed and with a renewed sense of awe. It is difficult to put art into words, but these lines from Robert Penn Warren express it perfectly:

In this century, and moment, of mania,
Tell me a story.

Make it a story of great distances, and starlight.

The name of the story will be Time,
But you must not pronounce its name.

Tell me a story of deep delight. 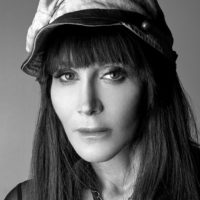