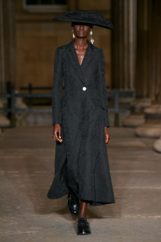 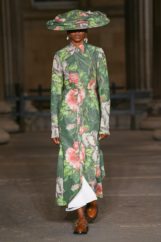 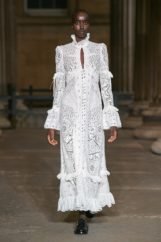 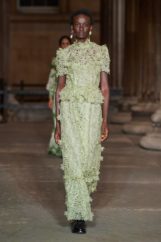 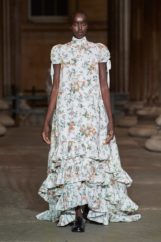 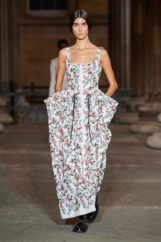 Since establishing his brand 15 years ago, designer Erdem Moralioglu created one of the defining brands for female elegance, always experimenting with prints and perfecting his craftsmanship. For over a decade, ERDEM proved the strength of femininity, unveiling confidence in the women who wears his clothes.

The spring summer 22 season was no exception for the British-Turkish designer’s poetic portrayal of the female form… describing the collection as a “love letter to London’s idiosyncratic soul.”

The designer who often finds his inspiration in historic personalities, once again glimpsed at the past… His muses this time were 19th century British poet Dame Edith Sitwell and 18th century aristocrat artist Lady Ottoline Morrell, “Sitwell and Morrell were enigmatic characters who lived on the peripheries between myth and reality, neither was interested in fitting in. On the contrary, they relished standing out.” Moralioglu expressed in his show notes.

The collection spoke for itself. Models graced the runway in modernised Victorian and Edwardian silhouettes. The botanic prints and embellishments were subtle and softened, some reminding me of floral prints on wallpapers and vintage furnitures, decorating slim dresses and long fishtail skirts. The beautiful cinched dress in green florals and matching cartwheel hat was the highlight of the collection for me.

There is always a story from the past which is waiting to be retold at ERDEM, a nod to history… but the clothes belong to the present, worn with an air of novelty.