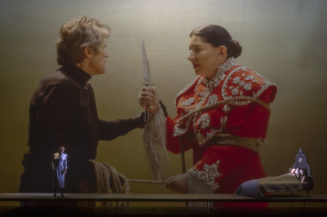 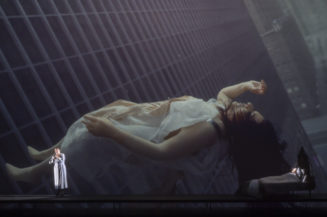 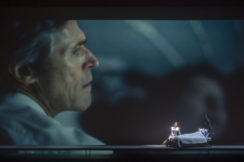 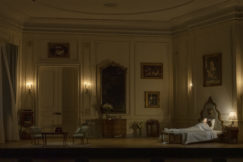 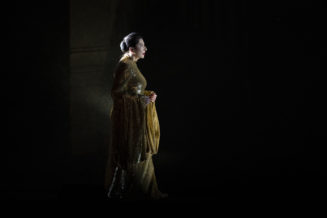 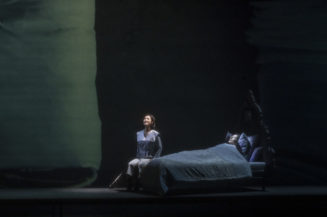 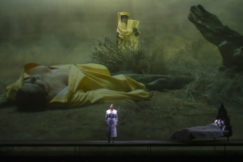 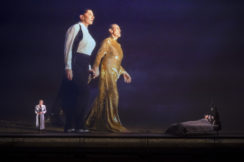 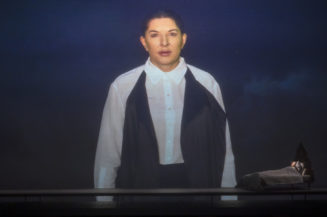 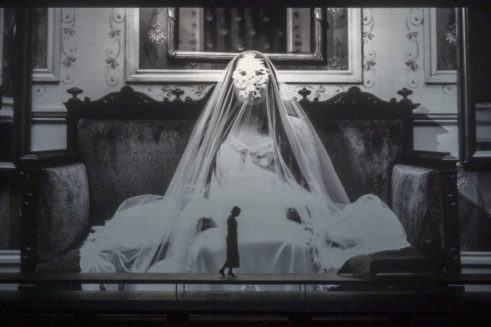 The event that opened the lyrical season of the Opera National de Paris, is a new piece mixing classical and contemporary art, wherein the major figure of performance meets the very icon of the diva, Maria Callas incarnated by Marina Abramović.

For 7 deaths of Maria Callas, the 74-year-old Serbian artist is immobile in a bed, dead and only opens her eyes at the end of the show. Hypnotized by her voice that punctuates her various deaths, we are waiting to see her awake, alive. Behind her, sequences are projected where we see her falling into the void, strangling herself with a snake, stabbing her heart with glass, her body covered with blood… and always a man who assists, provokes this death, Willem Dafoe. On the other side of the stage, several female opera singers succeed one another and interpret well-known arias from La Callas, Carmen by Bizet, Tosca by Puccini, Otello by Verdi, La Traviata by Verdi, Madama Butterfly by Puccini and more.

Performance, film, fashion and music intertwine in this mythical place of live show, in the city where the diva passed away. The costumes are designed Burberry by Riccardo Tisci, the videos made by the clipper of the stars Nabil Elderkin and the staging by the performer herself, Marina Abramović. All these arts together allow to expose what characterizes life and inspires art, love, death, violence, beauty and grace and inevitably the character of Maria Callas.

And who better to interpret these fictional endings than the woman who has touched death on several occasions in her works, such as her kiss to the point of fainting with Ulay, her ex-partner, Breathing in-Breathing out (1977), or like Rest Energy (1980), where Ulay holds a bow loaded with an arrow aimed at her heart. But in this show, death is really linked to love, « to that universal and age-old feeling of heartbreak » she says in her interview for the opera magazine, Octave, « anyone in the audience shares that with me and can project their own story onto mine or Callas », both women who thought they were dying of sadness after a heartbreak, the diva with Aristote Onassis and the performer with Ulay. Abramovic said in an interview « my work saved me », we can see her staging as a reminiscence of many of her works, and reminds us that her life is intimately linked to that of the singer, « we both had difficult childhoods, when I was younger, I compared myself to the photos of Callas and said to myself how much I resembled her physically. But more than the physical aspect, it is the mixture of fragility and strength that brings us together. This balance between absolute mastery and total freedom is exactly what I am looking for when I create a performance ». Through the Greek diva, Marina Abramovic gives us a part of herself, of her career, she reminds us above all that her art is performance, remaining paralyzed for 75 minutes, for those who expected to see her as a more lively character at the Opera, which is nothing compared to her performance at the MoMa during its retrospective in 2010 where she spent 700 hours sitting on a chair. For the final act of the show, in a set that exactly replicates the room where Callas died, she finally raises her gaze slowly and stares at the audience, as she did when she was preparing to raise her eyes to stare at the visitor who sat in the chair across from her, in her retrospective again. The director chose a beautiful ending, appearing on the front of the stage, black curtains drawn behind her, in a long dress entirely embroidered with golden sequins, previously worn by Willem Dafoe in the last video. She comes out of the movie screen and almost physically catches fire, the spotlights on her lamé dress lighting her up like a flame, the glitter rising in the air on the black of the curtain, Marina Abramovic burns on stage. A less crude way of evoking death than the projected sequences and her performances in general, she could not have afforded to risk her life even if some expected more, and has already done so in Rythm 5 (1974) where she was surrounded by a star of fire, she had to be rescued before suffocation. This time she had to play the same show several times and perform four times on the Opera stage.

The similarities that can be found between these two artists leave us free to decide what we watched. A desire perhaps to be one with the woman she idolizes, an obsession that began when she was 14 year-old and heard Callas’s voice on her radio. Did we listen to Callas and see Abramovic, did we attend an opera or a performance, there is no need to choose. The director’s willingness to deconstruct a classical opera reminds us of how multiple her art is and how diverse the facets of these women are. Abramovic plays a role, performs deaths, she is asleep in a bed or maybe it is Callas who dreams in these sheets. In the audience, on a red cinema or opera seat, the confusion is disturbing, the character is double. The body artist is dying, the singer is resurrecting, she lends her body for a few arias. 7 deaths of Maria Callas is a beautiful tribute to these women artists, to art in all its forms, a show that marks the beginning of a beautiful season at the Opera National de Paris.