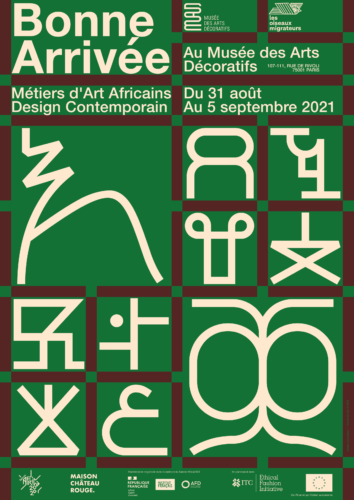 Africa2020 is the initiative of Emmanuel Macron and  is a pan-African and multidisciplinary project focusing on innovation in the arts, sciences, technology, entrepreneurship and the economy. Education will be a cross-cutting issue for the sharing and transmission of knowledge. Africa2020’s ambition is to create a global emancipation movement through a sustainable commitment built around the values of citizenship.

Made in Africa the collective Les Oiseaux Migrateurs launched by Mamadou and Youssouf Fofana, founder of the brand Maison Chateau Rouge,  and also partner and organizer of this initiative is thinking big by inviting in its wake African designers and craftsmen to come and exhibit their creations in September at the Musee Des Arts Decoratifs. The five Tunisian designers were selected by an international jury for them to come and expose their work.

The selection of the designers was coordinated with Nadia Baccouche-Le Gendre in partnership with Convergence. During a period of three months the 10 short listed designers were supported to create and produce their garments. Five were selected: Anissa Meddeb, Emna Gahbiche, Hedi Saad, Chems Eddine Mechri and Asma Haj Romdhane to participate in the “Bonne Arrivee” event.

The idea of the exhibition is to shine a light on the artisanal techniques and the history of the textiles and ceramics.

Anissa Aida is 27 and studied fashion at Parsons School of Design in New York. She launched her brand in 2016. Her looks are inspired by her Tunisian roots and her fascination with Japan.

Chems Eddine Mechri studied fine arts in Tunisia. He launched his fashion line in 2018 with recuperated textiles and dead stock.

Asma Haj Romdhane is a designer of her brand Tourath which means heritage in Arabic.

Hedi Saad is 28 and his brand is a mix of contemporary and traditional inspired by his grandmother Zina originally of Kasserine.

“Bonne Arrivee” was launched in 2014 by Mamadou and Youssouf Fofana. It will be in Paris at MAD for 6 days, from August 31 to September 5.