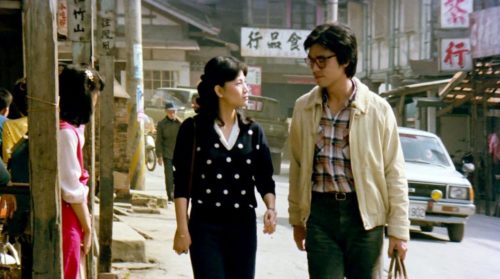 Long before Hou Hsiao-hsien became the grand filmmaker that we know, he started his career making mainstream movies. He made his directorial debut in 1980 with Cute Girl and in 1982, when he was 35,  he made Cheerful Wind which was an instant box office success. It is a romantic comedy that goes a bit against what was socially or rather morally acceptable in Taiwan at that time.

The film begins on the Pescadores Islands (also known as Penghu), where photography assistant Hsing-hui (Feng) is working on the set of a commercial directed by her colleague and live-in boyfriend, Hongkonger Lo Zai (Chan). During the shoot, Hsing-hui encounters Chin-tai (Bee), a blind man visiting the island, and recruits him to be in the commercial. When they meet again in the big city some time later, Hsing-hui and Chin-tai develop a close friendship that, as expected, blossoms into romance. The story seems to be setting itself up for a dramatic romantic rivalry between Lo Zai and Chin-tai for Hsing-hui’s affections, but it never goes down that route. Much like the film’s title, Hsing-hui seems to have a very easy-breezy attitude about the potential of cheating on Lo Zai, an oblivious guy who cares more about planning a trip to Europe than making his girlfriend happy. Though our heroine does have to make a choice in the end, there’s very little doubt about whom she will end up with when her choices are the hunky lead singer and the nerdy drummer of the Wynners.

The film is a document of its time and interesting to see Hsiao-hsien at the beginning of his career. Hou Hsiao-hsien is one of the greatest filmmakers of his generation and a leader of the New Taiwan Cinema. Some of his arthouse classicas are A Time to Live, A Time to Die, A City of Sadness, Flowers of Shanghai, Three Times and The Assassin. He remains one of the most prominent and influential figures in Taiwanese cinema today. Cheerful Wind was his second feature film.