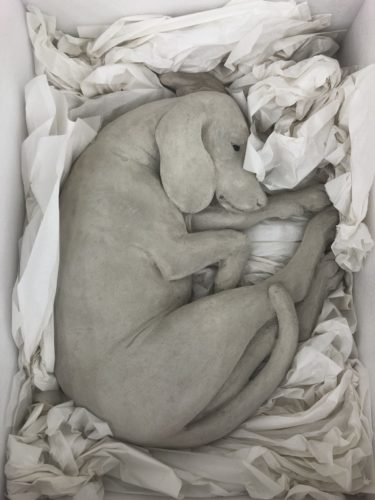 theO merCIER brings us the second chapter of OUTREMONDE dream hunters, a mindscape of sand sculpted from the dog’s eye at the LUMA Westbau in Zurich.

theO merCIER is a French artist, sculptor and photographer who’s vision is both tender and humorous. He’s self taught and has had my heart from the very first time that I experienced his art. theO merCIER passes his emotion through his art like a magician. I think I will never forget his ‘The loner” a giant Spaghetti monster with glassy eyes sitting uncomfortably on a too-small schoolroom chair “the boredom and the sad fate of being eternally “museographied” with touching humility. Unlike noble and lasting materials such as the marble or bronze of art masterpieces, Théo Mercier instead chooses a trivial material which is perishable and abundant to suggest the living, and makes a connection with humour between his Solitaire and the tradition of the vanities.”

The Loner was at the DYNASTY, exhibition in Paris at the Musée d’art moderne de la ville de Paris, Paris June – September 2010.

OUTREMONDE (Overworld) was shown in Avignon July-September 2021 in the Collection Lambert.